Arguably no artist has been more productive during the coronavirus pandemic than The Mountain Goats. While most people were rescheduling tours or filming a livestream, the beloved indie-folk group hit the studio to record three (!) whole albums. First was Songs for Pierre Chuvin, then came Getting Into Knives, and now the third full-length from that session has been announced. It’s called Dark in Here and it’s due out June 25th via Merge.

Dark in Here was recorded the week between Getting Into Knives and Songs for Pierre Chuvin at FAME Studios, the Muscle Shoals institution that’s immortalized everyone from Aretha Franklin to Gregg Allman. It spans 12 tracks in total and includes some pretty great song titles like “The Slow Parts on Death Metal Albums” and “Let Me Bathe in Demonic Light”, both of which sound like they will be quiet an experience.

The Mountain Goats are celebrating the news by sharing lead single “Mobile”, which you can stream below. It’s a verbose indie rock number that features Muscle Shoals players Spooner Oldham (Bob Dylan, Neil Young) on electric piano and Will McFarlane (Bonnie Raitt, Tammy Wynette) on lead guitar. In a statement, bassist Peter Hughes said that playing alongside the two musicians helped The Mountain Goats develop an even stronger level of connectedness while jamming, one that he describes as “bordering on the supernatural.”

“One of my quarantine projects after getting home was going back to Moby Dick and actually finishing it for once, and I was amused to encounter early on the retelling of the story of Jonah,” said Hughes. “If Melville gives it to us as a fiery 19th century New Bedford sermon, what ‘Mobile’ offers might be understood as Father Mapple’s modern-day Gulf Coast flip side, the breeziness of McFarlane’s electric guitar, and Matt Douglas’ accordion belying its protagonist’s guilty conscience.”

Pre-orders for Dark in Here are currently ongoing, including a limited-edition blue vinyl pressing. The band is also selling some creative merch to go along with it, like a pog pack and a jigsaw puzzle, all of which can be found over at Merge’s website. Check out the dreary album artwork and tracklist after the jump. 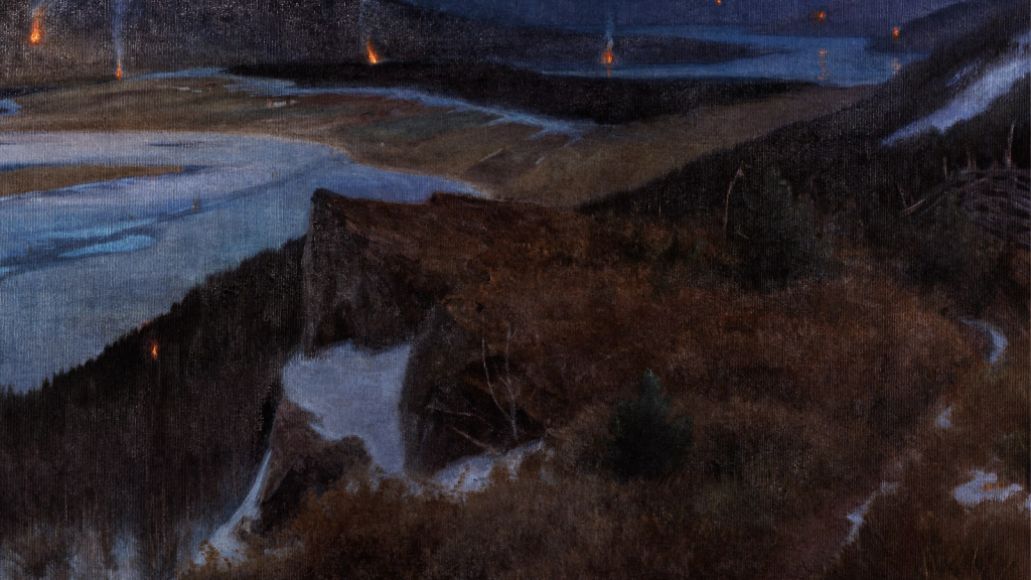 Dark in Here Tracklist:
01. Parisian Enclave
02. The Destruction of the Kola Superdeep Borehole Tower
03. Mobile
04. Dark in Here
05. Lizard Suit
06. When a Powerful Animal Comes
07. To the Headless Horseman
08. The New Hydra Collection
09. The Slow Parts on Death Metal Albums
10. Before I Got There
11. Arguing With the Ghost of Peter Laughner About His Coney Island Baby Review
12. Let Me Bathe in Demonic Light