The Pitch: It’s The Mighty Ducks with high school girls’ basketball instead of hockey, as an hourlong TV show instead of a movie.

Another Underdog Story: That pitch may seem reductive, but Big Shot really doesn’t have much on its mind — at least in the three episodes made available to critics — aside from being a redemption story with youth sports as the backdrop, as a plucky, young team turns its prospects around thanks to a new coach who doesn’t really want to be there. A major difference is in the ages of the students. Whereas the original Mighty Ducks were pre-teens, the players here are teenagers, thus enabling co-creator David E. Kelley to once again do a high-school drama in spite of not really having a solid grasp on writing the way high-schoolers talk.

Another key difference is in Kelley’s presence (though he’s only a co-writer of the pilot episode, along with the show’s other two creators, Dean Lorey and Brad Garrett — yes, the Emmy-winning actor from Everybody Loves Raymond). There are elements of these three episodes that are plainly reminiscent of his last high-school show, the Fox drama Boston Public. Though Big Shot is following similar parts of the youth-sports-movie playbook, there are also quirky adult characters, rapid-fire dialogue that’s meant to be overly intelligent, and a subplot dedicated to showing stuffy teachers being bothered at how high schools are too focused on sports — in such a strawman-esque story as to make the teachers the bad guys and the heavily prioritized sports program the underdog hero.

An Odd Duck: But then, the underdog story is the oldest standby in sports cinema, and that’s the case with Big Shot. John Stamos stars as Marvyn Korn (Kelley never met a weird name he didn’t like), a star coach in the NCAA who throws one chair too many in his in-game rage and is promptly fired. His agent (Adam Arkin) is able to find him a job coaching girls’ basketball at a private school in La Jolla, California, and as much as Marvyn doesn’t want to take the gig, he’s got no other options. And though he rubs some people the wrong way from the start, Marvyn just might win over the skeptical team he’s coaching, as well as the tough-as-nails administrator (Yvette Nicole Brown, wonderful as always), his assistant coach (Jessalyn Gilsig), and some doubtful parents.

Big Shot is an odd duck of a show, for a number of reasons. Stamos is charming, which is arguably a big reason why it is impossible to envision him as a guy who would be so angry on the basketball court as to get ejected from a game, let alone fired from his very cushy job. Stamos has plenty of talent — and is capable of creating chemistry with all of his co-stars — but he’s not remotely believable as anything other than grouchy. (Especially since Marvyn begins softening to his players by the end of the first episode in a 10-episode season.) Perhaps oddest of all is the fact that if you’re a fan of youth-sports fiction, and you’re really jonesing for a TV show on Disney+, you could watch Big Shot… or The Mighty Ducks: Game Changers. It’s one thing for Big Shot to follow a similar creative path as a Disney film. It’s another for Big Shot to share virtual space on Disney+ with an actual Mighty Ducks TV show, both airing their first seasons at the same time. 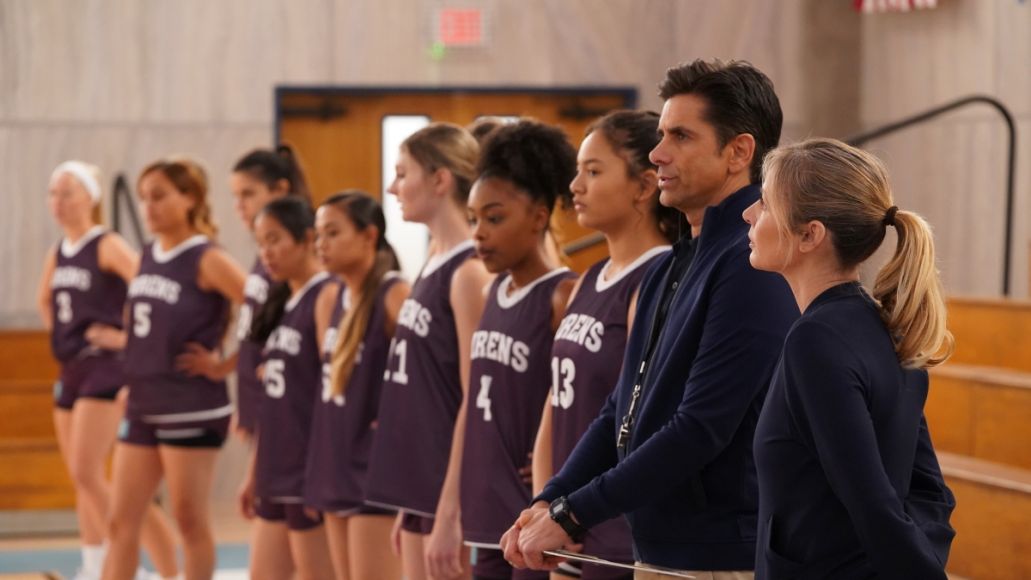 Satisfying Enough, but Slight: Weirdly enough, though, neither of the underdog TV dramas are particularly great. If you can only choose one, Big Shot is the right choice. It’s more effective as an hourlong show; though both it and Game Changers feel like they’re taking a feature-length arc and playing it at a slow-motion pace, the character work is more compelling here. Stamos is matched well by Gilsig (who longtime Kelley watchers may remember as having been one of the leads on the aforementioned Boston Public), whose assistant coach sees right through Marvyn’s bluster and easily matches wits with him. And though Brown’s time on screen so far is limited to staying in her office and laying down the law, she’s always enjoyable to watch. Hopefully, the material rises further to her level by the end of the season.

Big Shot, unlike The Mighty Ducks: Game Changers, is watchable. Even produced at the length of traditional network dramas (sans commercials), the show is improved by its cast more than by its writing. Game Changers has, so far, chosen to take the longest possible path to what is almost certainly an inevitable triumph at the end of its season; the kids on that show haven’t so much as won a game yet. Within the span of three episodes, Big Shot feels more like it’s trying to shove in lots of different underdog tropes into each hour, making time for game-to-game wins, personal setbacks, a funeral or two. Big Shot may be the more satisfying of the two shows, but it remains a puzzle that any studio or producer would see an inherently feature-appropriate story as making more sense as a 10-episode TV show.

The Verdict: Big Shot is a slightly enjoyable sports drama anchored by a solid lead performance, but the acting can’t rise too far above the writing. At least not yet.

Where It’s Streaming: The first episode is now available on Disney+. New episodes will be released once a week each Friday.