The Pitch: Based on Alissa Nutting’s 2017 novel-of-the-same-name, this dark comedy opens as Hazel Green (Cristin Milioti) escapes the Hub, a state-of-the-art estate where she was literally trapped in a 10-year abusive marriage to her tech mogul husband, Byron Gogol (Billy Magnussen). Alas, Hazel doesn’t get far before she discovers that Byron has implanted a surveillance chip in her head without her consent that allows him to see and hear her every move.

In an attempt to avoid Gogol’s lackies like Lyle Herringbone (Dan Bakkedahl), Hazel seeks refuge with her widower father Herbert (Ray Romano) at her childhood home. While she tries to move on with her life, and Byron plots to woo her back, Made For Love hops back and forth in time to unpack the details of their whirlwind courtship, their life at the Hub, and the dangers of the scientific program from which the series takes its name.

The Chameleon: In less than a decade, Milioti has quietly built up a stellar track record of memorable guest arcs and one-off roles. From How I Met Your Mother to Black Mirror, Fargo Season 2 to Mythic Quest’s standalone episode, Milioti is the actress you cast when you need a funny, warm, and relatable comedic talent. Save for last year’s Palm Springs, though, Milioti hasn’t had as many opportunities to show her range. While Made For Love takes its time peeling back the character’s layers, it quickly becomes clear that there’s more to Hazel than the series initially lets on. 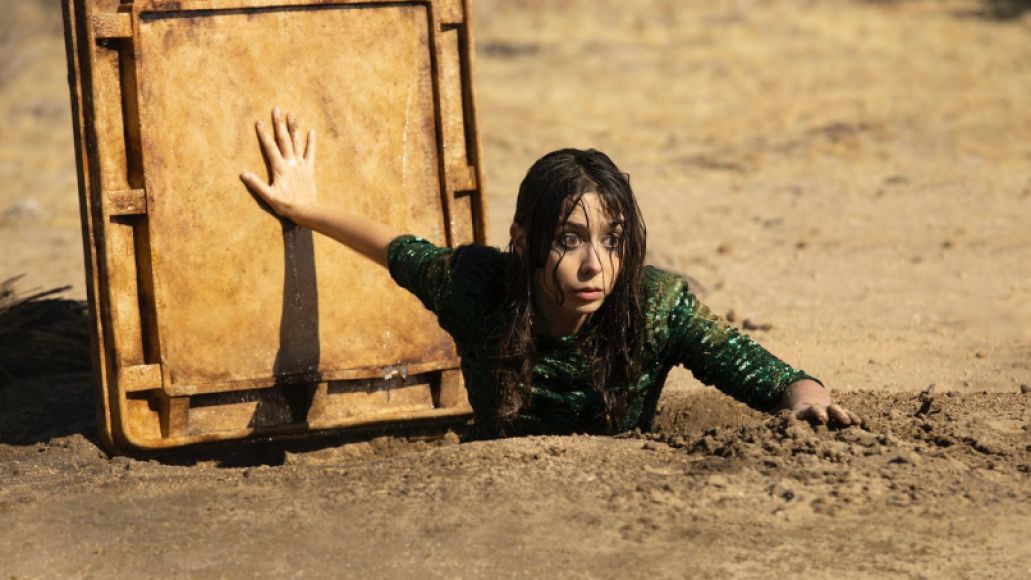 Hazel is revealed to be more than an apprehensive abuse survivor. She’s also a petty woman, who resents the time stolen from her; she’s a daughter with a tense relationship to her drunkard father; and she’s an aimless grifter with an uncertain future. Milioti is the perfect fit to embody all of Hazel’s traits because she’s so damn likeable. That charm carries the character, and by proxy, the series, even when some of the other elements aren’t quite as solid.

The Future Tech: Made For Love resembles the slightly futuristic world of Amazon’s Upload. On the whole, the world is mostly the same, but there are unique features, specifically virtual and medical technologies, that are light years ahead. This is embodied in the Hub: Byron and Hazel’s isolated house/prison in the desert. The estate is comprised of holographic cubes that simulate different environments and there are no doors, smells, or food (in true eccentric guru fashion, Byron only eats “flavor balls” for sustenance). 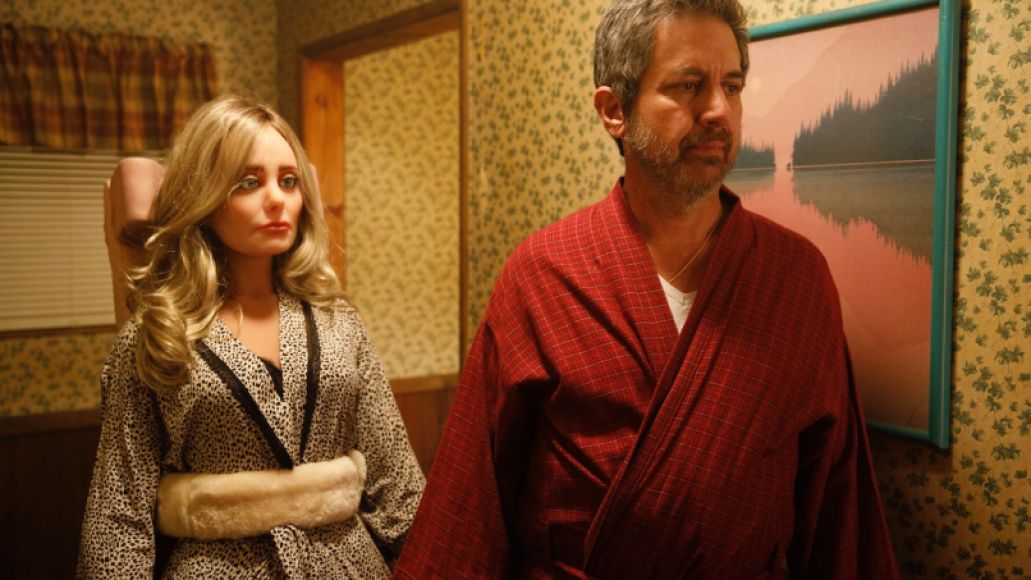 This is juxtaposed by the stark mundane reality that Hazel escapes into outside. Her father still lives in the run-down family home, most vehicles look the same, and the local bar maintains a bull-riding machine in the back. The disparity between Hazel’s supposed life of luxury and the sad low-fi reality of the outside world is both visually striking and narratively important as Hazel desperately tries to convince outsiders that her life in the Hub wasn’t the paradise that the entertainment profiles made it out to be.

The Balancing Act: Arguably the trickiest part of Made For Love, and the one the series struggles with the most, is balancing its disparate tones. From Hazel’s opening scene, when she emerges from a hatch in the desert floor that immediately hits her in the head, the series is presented primarily as a comedy — and there are, indeed, a lot of comedic moments.

Elsewhere, Magnussen draws big laughs from Byron’s disdain for (and disconnect from) rote elements of the real world (he doesn’t recognize Willy Wonka or donut holes); Lyle accrues a litany of slapstick injuries in pursuit of Hazel; and Milioti delivers countless exasperated reactions to Byron’s ridiculous activities (a favorite is the required five-star rating of her daily orgasm). 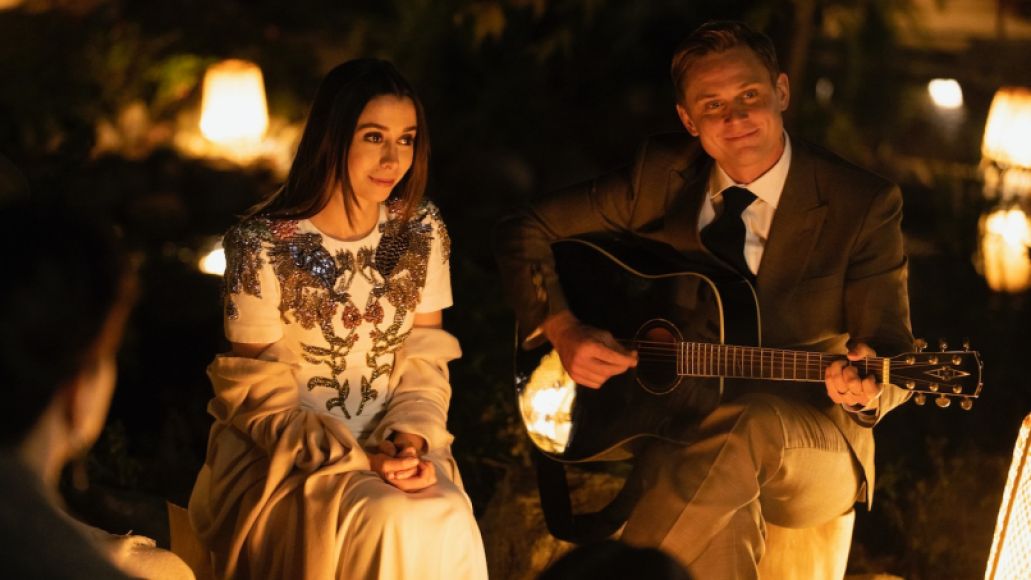 Alas, not all of this is successful. Take the show’s strained, repeated attempts to mine comedy from Herbert’s domestic relationship with a sex doll named Diane. This farcical conceit to paint Hazel’s father as a pathetic figure within the community only becomes more glaringly off-putting when it jostles for screen time with the very real depiction of PTSD and abuse Hazel is starting to process.

The Abuse: The series’ murky tonal balancing act is complicated further when Hazel’s backstory and youthful indiscretions are introduced. These character beats helpfully serve to flesh the character out, but they could be mistaken for condoning (at worst) or inadvertently suggesting (at best) that Hazel’s impulsiveness is partially to blame for her own victimhood.

To be fair, this is clearly not the intention of the creative team behind Made For Love. In the same episodes, Hazel uses language that affirms that she is both a survivor of domestic abuse and not Byron’s property. What’s more, the series also clearly paints Byron as a deluded megalomaniac, who is completely out of touch with reality.

Through its first four episodes, however, Made For Love has yet to truly capture the horrific reality of Hazel’s 10-year imprisonment or why she didn’t escape earlier. This, along with Magnussen’s charming good guy persona, winds up defanging Byron as a threatening figure; too often his threats read as performative as opposed to menacing.

The Verdict: A captivating lead performance by Milioti and an intriguing sci-fi premise enable Made For Love to successfully overcome its occasional tonal missteps. In its depiction of domestic abuse and gaslighting, the series is ultimately too slight, but as a comedic diversion Made For Love is another good addition to HBO Max’s stable of unique dramedies.

Where’s It Playing? Made For Love premieres April 1st via HBO Max with new batches of episodes released each Thursday.