The Pitch: Mare Sheehan (Kate Winslet) is a local hero in the titular small Pennsylvania town. Twenty-five years after making the game-winning shot in a high school basketball tournament, she’s now a police detective and local savior of sorts. But community faith in Mare is beginning to wane as she has not been able to find Katie Bailey (Caitlin Houlahan) a young mother who disappeared and is presumed dead. The murder of another young mother on the one-year anniversary of Katie’s disappearance reignites the cold case and plunges Mare into a word of dark cruelty and impossible choices. Craig Zobel’s new HBO miniseries is a dour, but relatable representation of the cost of caregiving and the effects of generational trauma. Though grim and full of pain, Mare of Easttown is a moving story about a woman trying to save everyone but herself.

The Ties that Bind: Easttown is a tight-knit community with a long memory in which Mare finds herself constantly confronted with her past. Winslet disappears into the role as a world-weary detective whose days are spent neglecting her own needs to solve the problems of others. Though the Pennsylvania accent feels occasionally clunky, her dressed-down performance is a far cry from the glamorous movie star we’re accustomed to seeing. Winslet imbues an aloof character with empathy and humanity, drawing the audience in with a subtle but heartbreaking portrayal of a woman on the verge of losing everything.

Mare’s ex-husband, Frank (David Denman), lives in the house directly behind hers, making co-parenting convenient, but forcing her to watch from a distance as he finds happiness with another woman. Her teenage daughter, Siobhan (Angourie Rice), is still processing the death of her older brother and helping to raise his young son, also living with Mare. Sharing this parental role is Helen (Jean Smart), Mare’s mother, who moved in with her daughter to offer support. The two share a prickly, but loving relationship, and Smart’s talent for infusing emotional moments with relatable humor keeps the show from drifting too far into sadness. The four generations create a warm family unit that anchors the story in the midst of profound tragedy.

Though she knows everyone in town, Mare has a close group of friends, many of them also former members of the famed basketball team. Each struggles with her own unique trauma, but they never hesitate to give what little support they can to each other. The addition of two would-be suitors, Richard (Guy Pearce), an older author teaching at the local college, and Colin (Evan Peters), a young hotshot detective sent to help Mare solve her case, complicates Mare’s already tangled life. Both are intrigued by her blunt honesty and no-nonsense approach to life, but they also shine a light on her reluctance to seek any happiness for herself.

Women’s Work: Mare of Easttown’s emotional core lies in showing the burden of caregiving so often shouldered by women and mothers. Through all the hardship, tragedy, and disappointment it is the women of this community who hold everything together. Young grandparents raise the children of their own teenagers, and adolescent mothers put themselves in danger to earn money for pediatric medical bills. Many men do offer support, but it’s often seen as optional, and when they choose to walk away, the women must step in.

Arriving 10 years after Winslet stepped into the iconic role of Mildred Pierce, Mare similarly sacrifices nearly everything for her children and family. She is an updated version of a female character vilified for making difficult choices. Mare shoulders the needs of the community but becomes the target of their frustration when she is unable to meet their impossibly high expectations. She’s constantly called stupid or stubborn for doing the very thing they rely on her for and becomes the scapegoat for their pain. While frustrating, both stories show how the physical act of caregiving often leaves little time for the self-care and emotional availability needed to raise children, leading to heartbreak and disaster in the years to follow. 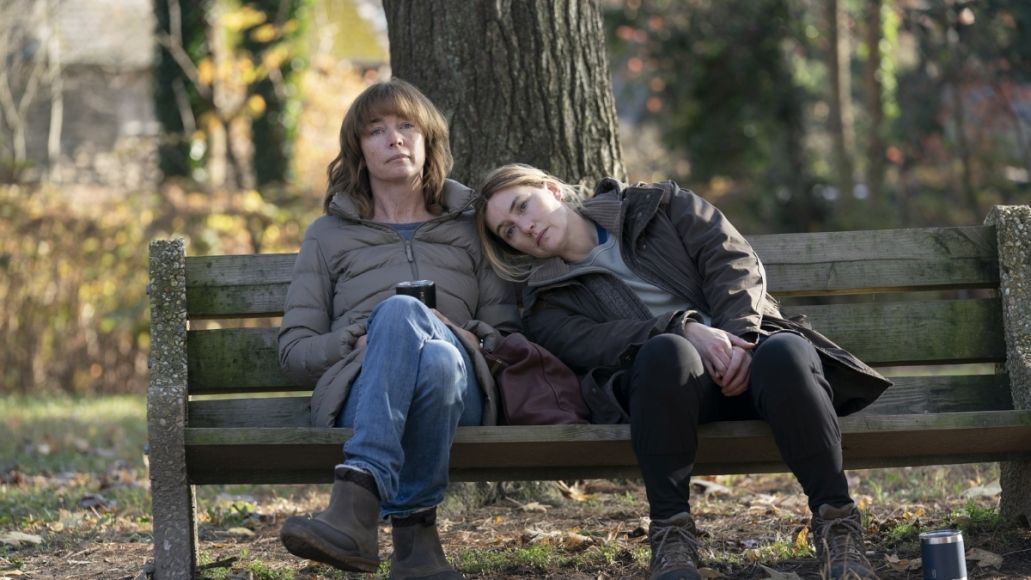 Expectations: As more of Mare’s tragic past is revealed, her cold demeanor begins to make sense. After a shocking act of self-destruction, she is forced to seek help through therapy and finally begins the job of unpacking decades of repressed trauma. But the answers are not readily apparent. Mare has become a secondary victim of mental illness and a link in the chain of generational trauma. She also lives with immense guilt due to choices she made as a parent and is terrified of making the same mistakes with her grandson.

Part of her pain lies in the unrealistic expectations suddenly thrust upon her after the famous basketball game. This could have been the beginning of a bright future filled with endless possibilities. Instead it was a high point in a full, but mostly ordinary life.

But rather than accept this perhaps harsh truth, the community put her on a pedestal, a beacon they could look to for hope and inspiration. They see her as someone who can routinely achieve the impossible and anything less is failure.

She finds a kindred spirit in her new partner, Colin, famous for solving a major case involving a missing girl. They both live with imposter syndrome, secretly fearful that their accomplishments may have been luck. Richard achieved acclaim for his first novel, but has been unable to recapture its success in subsequent work. A bit older, he seems to have made peace with his life’s trajectory and tries to impart to Mare some of the perspective he’s gained along the way. Mare herself is somewhere in the middle. Aware of the dangers of exceedingly high expectations, but not quite ready to stop holding herself to them.

The Verdict: Mare of Easttown is a slow burn that often seems to compound tragedy upon more tragedy. But it is also filled with hope. Through honesty, vulnerability, and connection with others, Winslet brings to life a character beginning the work of processing repressed trauma. Zobel does not shy away from the difficult nature of this path, presenting raw truth and humanity in complicated but familiar characters. By examining the lingering effects of the highest and lowest moments in our lives, Mare shows us a way to live unafraid of the next moment.

Where Is It Streaming? Mare of Easttown premieres on April 18th on HBO with new episodes each Sunday night.