The Pitch: Six years after the end of Parks and Recreation, head back to small-town America with Michael Schur, his old Office cohort Ed Helms, and more in Rutherford Falls, a timelier and thornier streaming sitcom.

Small-Town Humor with a Twist: In the later seasons of NBC’s Parks and Recreation, one of the more frequent recurring characters was Ken Hotate of the Wamapoke Casino, who would often politely but firmly butt heads with the effervescent and ever-cheerful Leslie Knope of the Pawnee Parks and Recreation department. In one episode, as Leslie tries to get a town festival off the ground to raise funds for Pawnee, Ken reveals that there’s a Native American curse on the land, and only after fierce negotiation does he “lift” the curse, playing into fears that white people unnaturally have of foolish curses while acknowledging that it’s completely fake.

There was — at the time, and especially now — a darkness lurking at the edges of these sequences. Leslie was (like the creative staff of the show) a fairly progressive white person. Leslie also adored Pawnee, even as she had to ruefully cop to the small town’s disturbing and grim historical treatment of the Native Americans who’d owned the land before whites came and took it for themselves. But that darkness was always briefly noted and then moved past. The sunny view of small-town government in Parks and Rec may seem especially fantastical now, which makes the new show Rutherford Falls (from P&R co-creator Michael Schur) all the more risky and pleasantly unexpected.

The show takes place in the eponymous small town in upstate New York, initially appearing to be another P&R-style sitcom anchored by a maddeningly optimistic dreamer who gets to encourage those around him to follow in his vision. This time it’s Nathan Rutherford (Ed Helms), a descendant of the founder of the town who wants to ensure his family’s place in history is enshrined. But by the end of the first episode, there’s a surprising turn, as the show presents that maddening optimism as alienating, obnoxious, and simply wrong.

History With Meaning: Nathan just wants his family’s history to mean something, in part because that ensures his own passion will mean something. Nathan’s family (specifically his big brother) all clearly have little interest in their ancestry; Nathan, on the other hand, is spurred into action when he learns that the mayor wants to remove a statue venerating his ancestor from a local thoroughfare. (Seeing as how the statue is literally placed in the middle of the road — that’s where Nathan’s ancestor first stepped into town — it’s hard to argue with the mayor.) But even as the mayor notes that defending old statues is perhaps not a great look these days, Nathan refuses despite encouragement from his longtime best friend, Reagan (Jana Schmieding).

It’s through Reagan that Rutherford Falls reveals its more deeply compelling story, which is at heart the centuries-old conflict between whites and Native Americans who want some form of reparations from countless years of tragedy. Reagan wants to bring a Native American cultural center to life, but has to do so in a massive casino run by the shark-like Terry Thomas (Michael Greyeyes), a fierce Native American businessman with a shocking gambit up his sleeve that he’s able to use after Nathan’s rant during a town event goes viral and attracts the attention of an NPR reporter (Dustin Milligan). 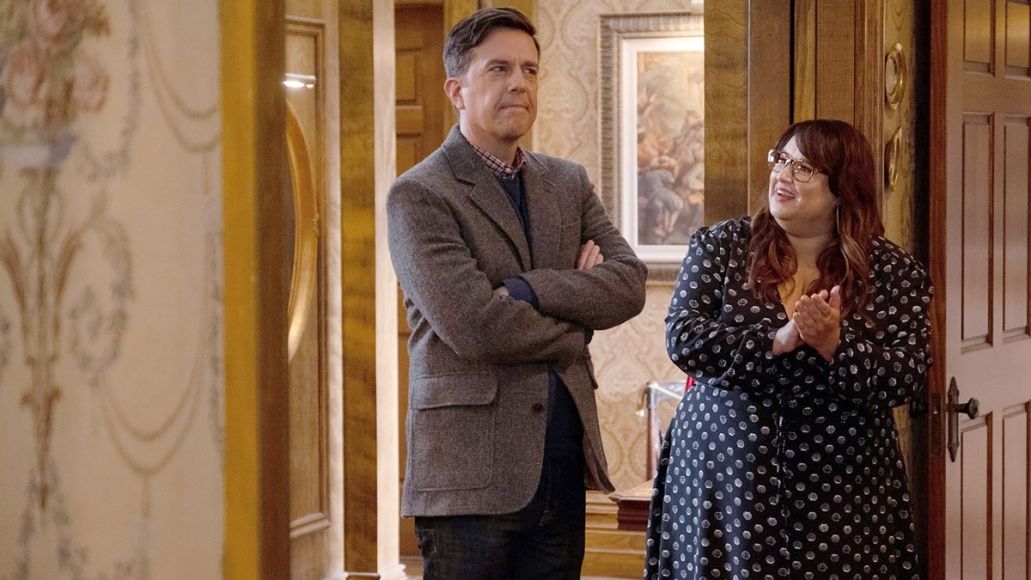 Smarter Than It Looks: The short version is that Rutherford Falls has a lot more on its mind than may seem evident in the first episode, which climaxes with the kind of public speech that starts off reminiscent of the heartwarming moments on Parks and Recreation where Leslie would sway the obstinate citizens of Pawnee through her ebullient charm and optimism. The difference is that Nathan’s speech curdles quickly, in a very effective performance from Helms.  The Office alum toes a very careful line as Nathan — the show doesn’t go too far out of its way to clarify that his own stubbornness isn’t borne of racism, the way it is for many real-life Confederate statue defenders, but it also doesn’t let Nathan off the hook.

This is what’s most exciting and intriguing about Rutherford Falls. While many of the shows produced and/or written by Schur boast remarkably well-cast ensembles, sharp writing, and memorable comic setpieces, those same shows are rose-colored in their love of the characters. It’s a nice sentiment, but not one that helps the shows age well over time. (Parks and Recreation ended its run a year before Donald Trump became president, and its status as a of-the-moment political satire has dimmed during the last few years, because of its endlessly hopeful view of American humanity.) Rutherford Falls, on the other hand, boasts deeply flawed characters, whose flaws are not only apparent to the audience but to each other. There’s already more dimension given to these characters than was the case in early episodes of P&R or The Office — the famously rocky starts those shows had isn’t present here.

The Old vs. the New: What’s most encouraging about the four episodes made available to critics is how Nathan’s story begins to feel secondary. There are hints that the Rutherford family has a much grimmer ancestry than Nathan would like to believe, and Nathan is beset upon by the unavoidable reality that many of those who agree with him about the statue hold largely outdated or odious viewpoints. (This is represented in a loopy guest turn from comedian and podcaster extraordinaire Paul F. Tompkins.)

If there’s any hesitation in recommending Rutherford Falls, it’s wondering how the first season will play out. The best thing you could say about this show is that it’s a shame Peacock didn’t release the full season to critics; four episodes just isn’t enough. But it’s also because knowing the history of shows like The Good Place or Parks and Recreation means wondering if Rutherford Falls can continue to have the courage of its convictions. This show’s starting out in a much franker, more confrontational place than previous Michael Schur productions have. Hopefully, it continues that way.

The Verdict: Fans of Parks and Recreation and The Office may be pleasantly surprised at how Rutherford Falls tackles its small-town view with more clarity and wide-eyed directness. It’s a solid, new comedy.