After examining working class America in Nomadland, Oscar-winning director Chloé Zhao is set to explore the beginnings of the Marvel Cinematic Universe. Her next film is Eternals, an MCU adventure set to reveal some monumental secrets about the world of the Avengers when it hits theaters on November 5th. Marvel has today shared the first teaser trailer for Eternals, which only hints at the glory of the ensemble cast.

The movie centers on a super-powered alien race that came to Earth 7,000 years ago. As a voice over (that sounds like it’s coming from Salma Hayek’s Ajak, the Eternals’ spiritual leader and a healer) explains, the Eternals have “watched and guided” humanity for millennia, but “have never interfered, until now.” Considering the movie takes place after Avengers: Endgame, whatever has brought these powerful beings out of hiding must be worse of a threat than Thanos, so you know it’s something nasty.

The trailer mainly provides a look at nearly every Eternal in the ensemble: Gemma Chan as Sersi, a matter manipulator who leads the film; Richard Madden as Ikaris, the flying, eye-laser-firing, super strong leader of the Eternals; Kumail Nanjiani as Kingo, able to shoot cosmic energy from his hands, but living his life as a Bollywood star; Lia McHugh as the ageless illusionist Sprite; Brian Tyree Henry as Phastos, a cosmic inventor (who happens to be the MCU’s first openly gay hero); Lauren Ridloff as the speedster Makkari, whose deafness means she can’t hear her own sonic booms; Barry Keoghan as Druig, an aloof mind controller; Don Lee as Gilgamesh, a super strong Eternal with an exoskeleton of cosmic energy; and Angelina Jolie as Thena, a warrior who can create weapons out of pure energy.

There’s also Kit Harrington as Dane Whitman, but he’s a human warrior who will eventually wield a mystical sword as The Black Knight.

As the trailer reveals, Eternals truly looks like a different kind of MCU film. Take a look below, followed by a gallery of all the characters and the new poster.

Angelina Jolie as Thena, who can create weapons out of cosmic energy

Salma Hayek as the spiritual Ajak, a healer

Kumail Nanjiani as Kingo, who can fire cosmic energy projectiles from his hands

Barry Keoghan as the mind-controlling Druig

Lia McHugh as the illusionist Sprite

Lauren Ridloff as the speedster Makkari 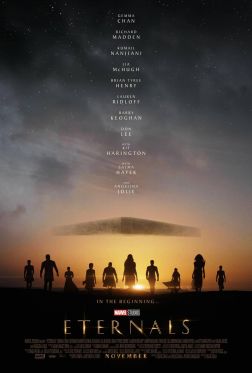