The Pitch: Seventeen years after Ross (David Schwimmer), Rachel (Jennifer Aniston), Monica (Courtney Cox), Chandler (Matthew Perry), Phoebe (Lisa Kudrow), and Joey (Matt LeBlanc) walked out of their New York City apartments and off the air in 2004, the six are finally back together for a one-off reunion special on HBO Max. But where most networks are dusting off their old properties for decades-late revivals, Friends: The Reunion is content to simply be a look back at the show that took the world by storm for a solid decade, and launched its cast into movie stardom.

The One With the Origin Story: Let’s get this out of the way first: Friends: The Reunion is content to be nothing more than a nostalgia trip victory lap for people who either lived or loved the show when it was on, and for decades after. Unlike HBO Max’s Fresh Prince of Bel-Air Reunion late last year, there’s no discussion of the broader sociopolitical import, tear-filled tributes to late cast members, or difficult reunions between feuding actors. Like the show to which it pays tribute, Friends: The Reunion is intended for gossamer-thin hangouts and good vibes all around.

This takes several forms, and the most successful are the moments with the original six actors, all of whom walk back into the meticulously-rebuilt sets — their apartments, Central Perk — and marvel like they’ve just walked back in time. The cast are noticeably older than they were in the ’90s, but as soon as they see each other, their chemistry relights like it’d never been snuffed out.  They haven’t seen each other in years, but their camaraderie comes flooding back, and it’s heartening to see. 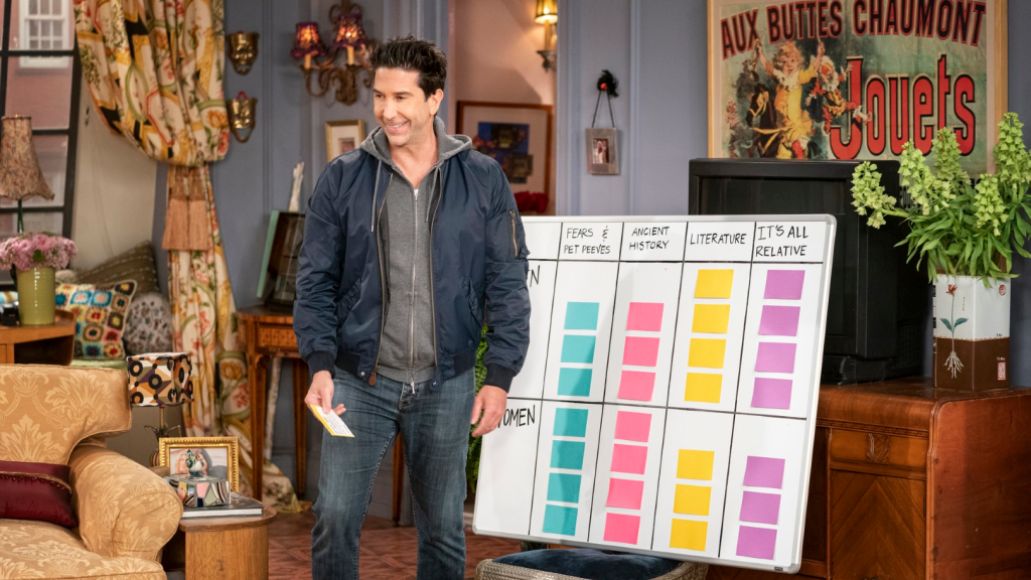 Apart from living in the moment of the reunion itself, the special also takes time to chart the origins of the series through interviews with creators David Crane, Marta Kauffman, and Kevin S. Bright. This stuff is interesting, though I wish we’d had more time to learn more of these behind-the-scenes details rather than some of the more gimmicky things the special focuses on (more on that later).

It’s neat to see where each of the Friends actors were at when they booked the show; LeBlanc had $9 to his name, Aniston had already started another sitcom and begged to be let off of it. But I want to see more about how the show affected their lives after the cameras stopped rolling — obviously it launched many of them into A-list careers, but that meteoric rise can come with more than a few difficulties. Still, the show wants to keep it positive, so I understand why they shied away from those kinds of conversations.

The One With James Corden: The thing that really drags it down, though, are the segments in which the Friends cast sit down for a group interview in front of the famous fountain from its iconic opening titles, with host James Corden asking questions and fanboying out with a socially-distanced audience. It all feels a bit too daytime talk show, and Corden’s theater-kid enthusiasm grates after a little while (as it often does).

Stunts and cameos abound, from bringing back celebrity cameos and walk-ons from Elliot Gould, Tom Lennon, Tom Selleck and others to a full-on celebrity fashion show of iconic Friends outfits. Yes, Kudrow sings “Smelly Cat” again, and is joined by a predictable high-profile musical guest. It’s all very cheeky and lightweight, but feels like the kind of stuff you could stuff into a fun YouTube video rather than a feature-length reunion special. 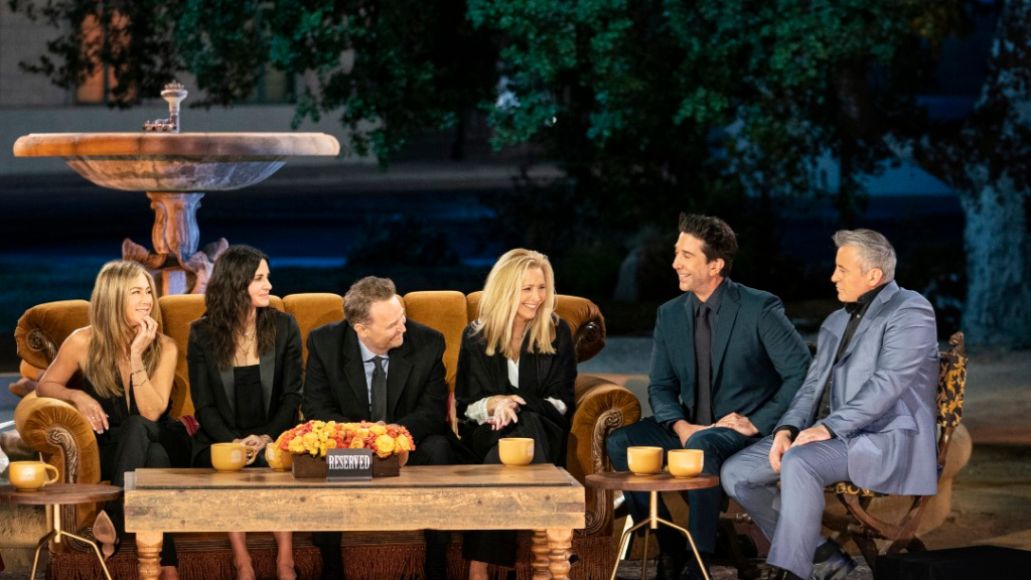 The One With the Fanboying: Still, apart from the show’s impact on its cast, the reunion special takes time to touch on the impact it’s had around the world, with fan-filmed segments of Friends enthusiasts talking about how the show lifted them up during tough times, or got them through their dad’s terminal illness, or overall provided a balm for a world looking for escape from the stressors of modern life. It’s an admittedly clever way to encapsulate the show’s appeal: Friends was all glossy surface, but sometimes that gloss can change your life for the better. It’s these moments, when we get to glance away at the pretty, white movie stars reminiscing about their big break, that the Friends reunion special feels most relatable.

The Verdict: Perhaps it’s asking too much for Friends: The Reunion to delve deeper into the production, or reveal some lascivious secrets or difficulties, or grapple more with the show’s impact on pop culture (and some of the more problematic elements that have been discussed in the wake of the show’s release, like its lack of nonwhite characters or the all-too-frequent gay jokes that were hardly unique at the time). But fans of the series don’t really want to see that — they’re just interested in seeing their six best friends from the TV catch up like an old high school reunion and reminisce about the good times. In that respect, Friends: The Reunion has plenty of pleasant fluff to entertain.

Where’s It Playing? Friends: The Reunion is there for you (when the rain starts to fall) on HBO Max May 27th.