An updated lineup for Psycho Las Vegas 2021 has been revealed, offering significant changes from the one that was announced last year in the wake of the festival’s postponement due the pandemic. Danzig and Emperor are still on board as headliners, but Mercyful Fate have dropped off the bill, with Down moving up into the vacant headlining slot.

Back in June 2020, after it was announced that last year’s edition of the fest wouldn’t be taking place, organizers revealed that most of the planned 2020 lineup would return in 2021. However, a number of those acts are no longer on the bill, including Mercyful Fate, Boris, At the Gates, Katatonia, Blonde Redhead, Wolves in the Throne Room, Ulver, Elder, and Bömbers, with a promise that they’ll be back in 2022.

The good news is that some big names who weren’t originally announced for 2021 have stepped in, including Cannibal Corpse, High on Fire, Thievery Corporation, Exodus, The Sword, Ty Segall, Red Fang, and Wu-Tang Clan member GZA performing his 1995 album Liquid Swords in full. Among the notable bands still on the lineup are The Flaming Lips, Mayhem, Satyricon, Watain, Amigo the Devil, Obituary, Poison the Well, Eyehategod, and dozens more acts.

The daily lineups have also been revealed, with Emperor headlining on Friday, Danzig topping the bill on Saturday, and Down wrapping things up on Sunday.

See the overall lineup poster, followed by the daily lineups, below. Pick up tickets to the 2021 Psycho Las Vegas festival here. 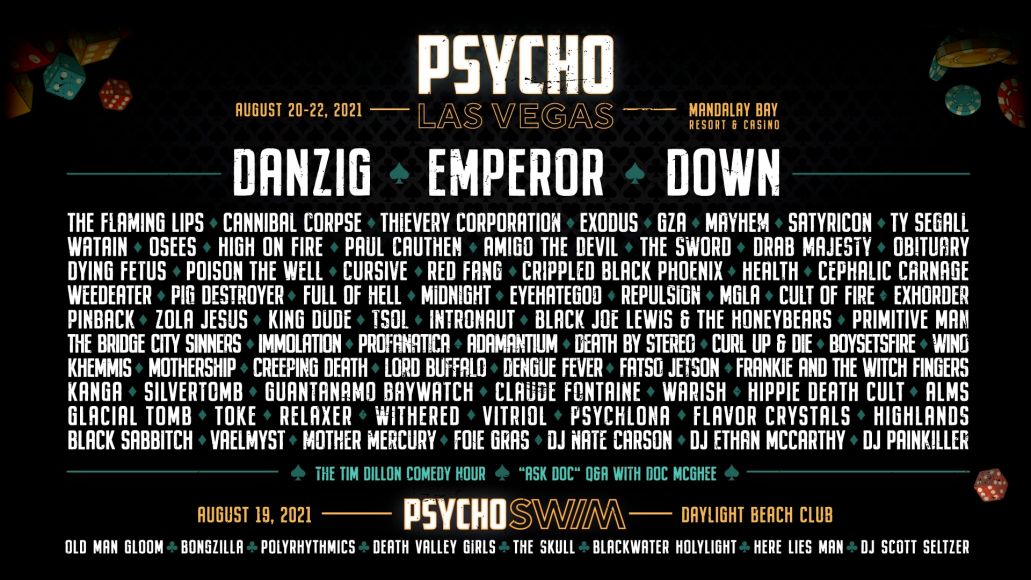