The Pitch: Years before she meets her ultimate end during the events of Avengers: Endgame, Natascha Romanoff, aka Black Widow (Scarlett Johansson), goes on a much smaller, more personal journey. In the wake of the Avengers’ breakup in Civil War, the former Russian agent goes into hiding, only for estranged sister Yelena (Florence Pugh).

Turns out that the Black Widow program Natasha thought she destroyed before she joined the Avengers is still going strong, with armies of indoctrinated girls raised into mind-controlled super soldiers; Yelena’s got the only antidote to set those girls free. And their quest to close out this chapter of their lives will bring them back into the orbit of their government-assigned “parents” from childhood, Russian Captain America equivalent Red Guardian (David Harbour) and Melina (Rachel Weisz), with whom they spent three years in 1990s Ohio living out the Americans scenario as Russian sleeper agents.

The Americans: The notion of a Black Widow-centered entry in the Marvel Cinematic Universe makes sense in, say, 2013 or 2014, after she made a big splash in The Avengers. (Yeah, she made her debut in Iron Man 2, but that was a glorified cameo.) But doing one now, a cool couple of years after her character finally bit the dust in Endgame, feels like gilding the lily a bit — giving a central character in the MCU her time in the spotlight long after she’s made her final bow.

That said, within the comparatively smaller-scale confines of the mid-tier Marvel picture, Black Widow is a surprisingly solid entry in the series, due in no small part to its laser focus on Nat and her fractured family dynamics. Director Cate Shortland (Somersault, Lore, Berlin Syndrome) leans into Nat’s comparatively modest power set — she’s not a god from outer space or a billionaire with a metal suit; she’s just a really good assassin — and plops her into the kind of mid-aughts spy caper of a type with the Bourne movies and the mid-budget European set action flicks of the day. (Right down to Olga Kurylenko being in the cast, but I won’t tell you who she plays.) 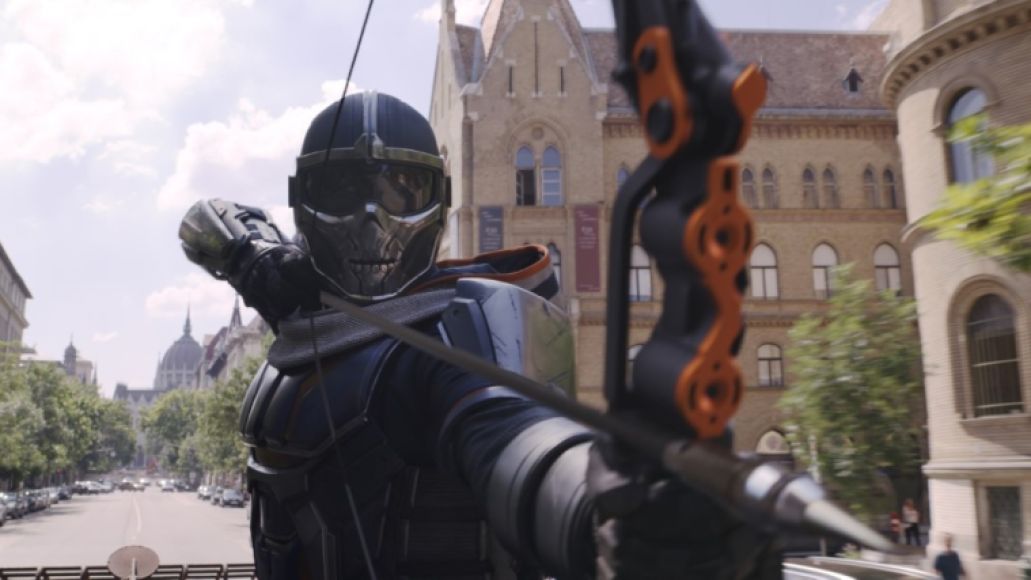 Speaking of action, Black Widow refreshingly stages its setpieces really well, particularly in its car-foot-motorcycle chase through Budapest as Nat and Yelena dodge enemy “widows” and their mysterious handler, a masked enforcer called the Taskmaster who can eidetically mimic others’ moves. They’ve got a Cap shield, Black Panther’s claws, and Hawkeye’s arrows, and flips from one skill to the next without batting a helmeted eye.

I’m always a sucker for solid, well-shot action, and there are more scenes of bone-crushing, scissor-kicking mayhem here than in a lot of more out-there Marvel movies. Sure, cinematographer Gabriel Beristain shoots it with all the greyed-out coldness of a Siberian winter, but unlike, say, the Captain America movies, it makes a bit more sense in this context. Plus, the vast majority of the action is clear and satisfyingly-staged, and makes the most of Black Widow’s kitten-quick, lithe skillset. (Yelena even gets a few good digs at her signature hair-flipping superhero landings, a nifty bit of lampshading.)

Tomorrow Belongs to Pugh: But for as much as Black Widow is a victory lap for Johansson, it’s a star-making vehicle for Florence Pugh through and through, and her Yelena absolutely holds the mid-tier proceedings afloat. The middle act, after Nat has reconnected with Yelena for the first time since childhood, is easily the film’s best; they bicker like murder siblings even as they scale rooftops and swing from helicopters, and Johansson and Pugh bounce off each other wonderfully. We’ve long known Pugh has what it takes to command a film with entries like Lady Macbeth and Midsommar, but Black Widow is a great showcase for her action chops as well — she can kick and quip in equal measure.

What’s more, there’s a little bit of Amy March in Yelena, the bratty little sister who can’t stop competing with her showoff superhero sibling. That’s especially true when conversations turn to Nat’s ostensible celebrity status as an Avenger, something that doesn’t get enough airtime in the A-line Avengers flicks but gets quite a bit of discussion here. That Nat is someone that people recognize for skills she learned at the cost of incredible trauma plays both into the broader story and Nat’s own characterization here (Snipes Yelena: “I’m not the killer that little girls call their hero.”) There probably won’t be a Johansson-led Black Widow sequel, but they’re clearly gunning to slot Pugh into the sly superspy role as a replacement, and Marvel could do far worse. 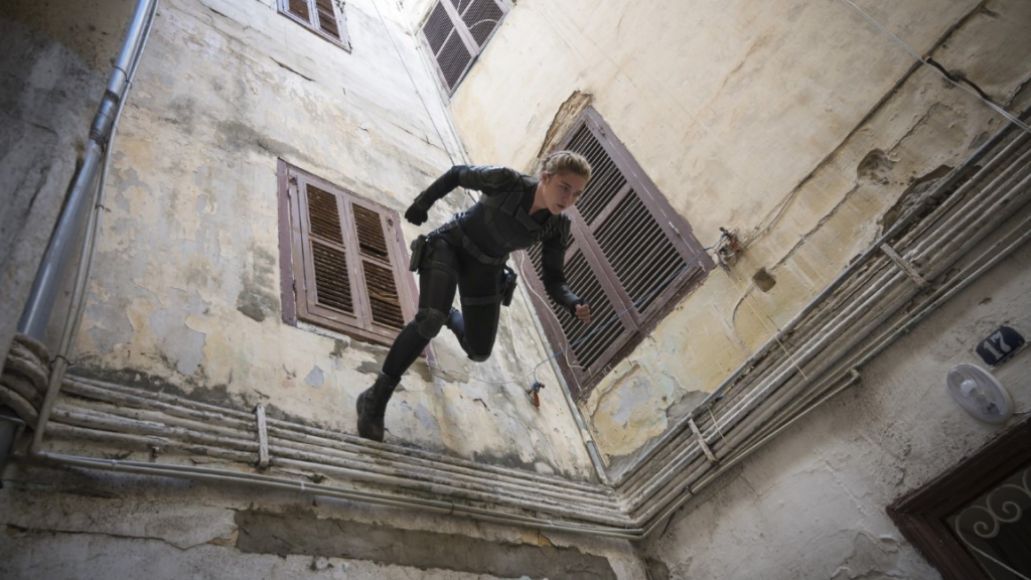 The Romanoff Identity: But all the sleek choreography and fun characters in the world can’t stop that most pernicious of Marvel menaces: the middling third act. When Black Widow gets to show off its stars’ (and stunt teams’) tightly-choreographed action, or sits down with its fractured family to reopen old wounds, it’s pretty neat. When it has to get down to the business of taking down bad guys, that’s where it falters: screenwriter Eric Pearson, unfortunately, drags us into yet another superbase that has to be destroyed, a cliched Russian villain in a tailored suit (a dramatically underused Ray Winstone), and a mysterious move-copying baddie called the Taskmaster whose identity is kept a closely guarded secret — only for the eventual reveal to be far less impactful than you’d hope.

It’s a symptom of the Marvel bloat these things tend to have: slash the budget in half and keep it focused on awesome martial artists and stuntpeople, and you’ve got a decent little spy thriller. But these things also have the unfortunate obligation of being superhero movies, with all the Bigness that implies. But with that added scope, we lose sight of the characters a bit, which is a real shame — because I like these characters. Harbour’s Red Guardian is an endearingly blustering father figure, his vanity and self-mythologizing contrasted nicely with his, as John Goodman in True Stories would put it, “consistent panda bear shape.” Weisz, for her part, is reasonably maternal and handles the action stuff well, though she suffers the most of the family unit — mostly due to some clunky double-villain fakekouts and not one, but two dodgy accents to juggle. Still, when the four of them get to finally sit down at a dinner table and bicker like the family they used to be, even for just a short time, it’s more interesting than half the CG punch-ups the franchise has to offer.

The Verdict: In some ways, Black Widow is actually aided by its status as a posthumous ode to a dead character in the Marvel franchise. The audience already knows Nat’s fate, which means Shortland’s action adventure can turn into a kind of tragedy: We get to see how, before she died, she got to reconcile with both of her respective families. It’s absolutely mid-tier Marvel, alternatively harmed and aided by its late position in the slate. But as a reintroduction to the cinematic universe after a year off due to the COVID-19 pandemic, it’s definitely worth a look. Here’s hoping more Marvel flicks take inspiration from this one: shrink their scope, focus on the characters, and get the action right. And for God’s sakes, give us better third acts.

Where’s It Playing? Black Widow spins her final web in theaters (and onto Disney+, for a $30 fee) July 9th.