At its heart, Pixar’s latest, Luca, is a film about adventure: the fear and thrill of stepping outside of your comfort zone, throwing caution to the wind, and experiencing the world outside your door. In the case of the film’s titular sea creature (voiced by Jacob Tremblay) that adventure comes from an unforgettable summer spent with a rambunctious fellow sea monster named Alberto (voiced by Jack Dylan Grazer) in the sleepy Italian seaside town of Portorosso.

Together, the two trade their fins for legs, learn to fit in with the rest of the island’s colorful characters, and dream of freedom and possibility — and owning a Vespa.

Fitting, then, that director Enrico Cosarosa would tap one of contemporary film music’s most adventurous composers, Dan Romer, to provide the score for Luca. While also a successful music producer (among his hits includes A Great Big World’s “Say Something” and Shawn Mendes’ “Treat You Better”), his composing career exploded when he and fellow Wesleyan grad/close friend Benh Zeitlin were nominated for Best Original Score for their driving, daring score to Beasts of the Southern Wild.

Since then, he’s remained incredibly prolific, scoring films like Cary Fukunaga’s Beasts of No Nation, Jeff Baena’s The Little Hours, and Guy Nattiv’s Skin. (He even reunited with Zeitlin last year to score yet another rustic tale of childhood adventuring, the Peter Pan pastiche Wendy.) He’s also branched out into other mediums, from TV (The Good Doctor, Maniac, Superman & Lois) to video games (see: his incredible, Appalachian-infused score for Far Cry 5). But regardless of medium, Romer lends each project an endearing sense of regionality and experimentation, eking out sounds both steeped in tradition and unlike anything you’ve heard before.

Romer’s score for Luca follows that trajectory, transplanting the Americana-tinged roughness of Wendy and Beasts to the sky-blue climes of the Italian Riviera with a similar sense of cultural specificity. There are the usual plinked strings and arpeggios you can expect from Romer’s work, capturing the genteel playfulness of Luca’s life on both sides of the surface.

Then there are galloping, adventurous cues like “Take Me, Gravity” that wind in mandolin and accordion to capture the swirling heights of Luca and Alberto’s devil-may-care play in the Italian countryside. Like in his best works, Romer evokes that feeling of unfettered possibility that’s the sole province of the young — the way rolling down a steep hill on a rickety, hand-made bike can become a life-changing adventure.

Ahead of Luca‘s release on Disney+ this weekend, Consequence sat down with Romer to talk about how he applied his principles of regional immersion and innovation to Pixar’s latest, what attracts him to stories of youthful imagination, and finding that Goldilocks balance of Italian influence in the film’s charming, soul-stirring score. 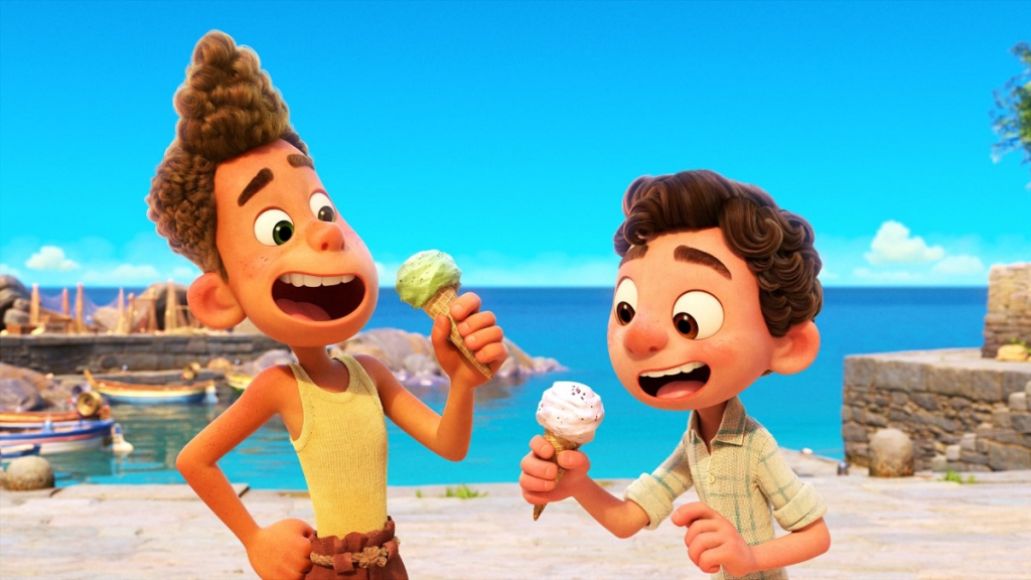 Luca, Beasts of the Southern Wild, Wendy — you seem to find yourself drawn to stories about the adventurousness of youth and imagination. Is there something there that attracts you to that kind of tale?

So much of this is about who you like working with, who your collaborators are. But in general, with artists, whether filmmakers or composers or musicians, there’s a fear of growing up. For all of us who worked on [Wendy], that was especially true: “I don’t want to grow up.” You get very focused on your long-standing friendships from childhood. I think that’s something that resonates with everybody, but that’s a story that artists want to tell a lot of the time.

Was it that appeal of certain filmmakers that drew you to Luca?

Yeah, I mean, when I first saw the original storyboards, I was like “Oh my god,” I was so excited to work on something with this kind of story and attitude, and the way it flowed.

What were some of the early conversations you had with Casarosa about the score and its Italian influences?

We knew that the music for Luca would have a time and Italian influence that was important. And we specifically didn’t want it to sound weird; we said, “Let’s stay away from Americana,” because that is a very near-and-dear palette for me, you know. I’ve done quite a few things that have, you know, fiddles, banjos, that kind of stuff. When you’re working in the realm of traditional music, there’s so much crossover, actually. Just the slightest tweak of instrumentation or harmony, and you can go from one cultural sound to another. Solo violin and mandolin are both prevalent in American and Italian traditional music. So it becomes about the subtleties and how those instruments play.

I did my first pass of music for Enrico, where we got a lot of the themes we were going to use. But a lot of the sounds were abstract and ambient and unusual; I was doing a lot of experimentation with sounds. I tried stuff where I was recording strings at double speed, then slowing them down the octave to try to get them to sound dreamy and weird. Enrico listened to that and he said, “Emotionally, I love this, but could we bring the whole thing a bit more Italian?”

That led me to take a much deeper dive into a lot of Italian music that I had already taken. Enrico made me an Italian playlist, and I have a few Italian collaborators I worked with who gave me their own playlists.

What kind of songs/artists were on those playlists?

Mostly stuff from the ’60s and ’70s — there’s some film music, but mostly pop and folk music. But when I’m going to be influenced by a style of music that isn’t my own, I try to do nothing but listen to that kind of music, so it becomes second nature to me. It’s like immersion therapy.

So my next pass was very influenced by those playlists, and Rico said, “Too Italian! Let’s split the difference.” [Laughs] He said that he wanted a score that sounded like me as a composer, but with mandolins, nylon string guitar, and more accordion and clarinet — instruments we associate with Italian music. It took a second at first, but once we found the right balance between my music and the Italian influences, I think we hit the ground running. 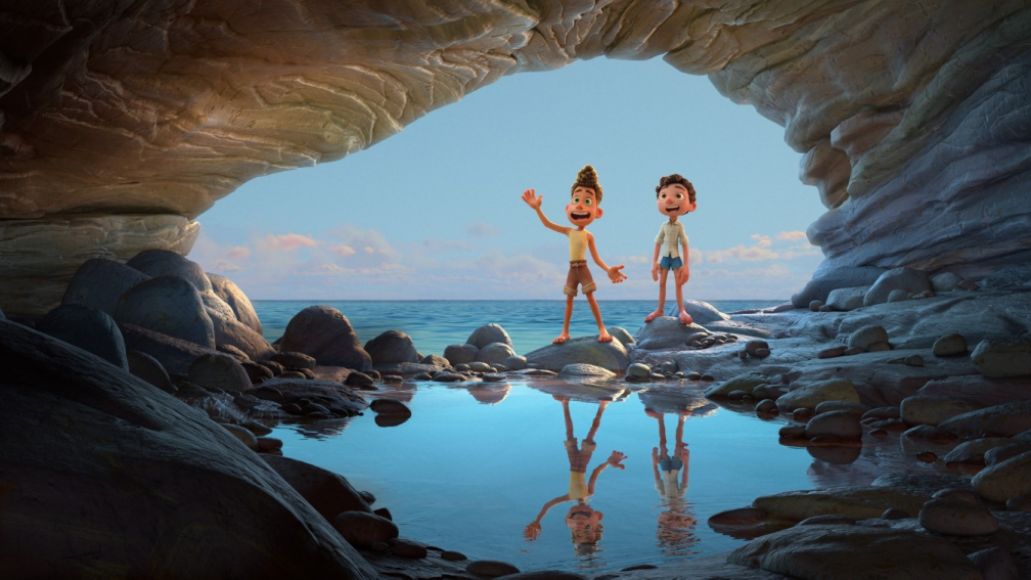 Of course, you’re also merging that with all kinds of disparate worlds — the underwater world, the land, fantastical vignettes that escape reality. Luca daydreaming of freedom. What things do you like to do to separate those realms?

All the underwater music still has Italian influence, but the music for the underwater scenes is a lot more reverberant and affected. The music is a lot more drawn out in the water. And for the dream sequences, there’s a lot of ambiance with processing on it to make it sound otherworldly. On the first two dream sequences, we actually use whistling as our lead instrument to represent the freedom of the open-air Luca dreams of. The whistling comes from one of my Italian collaborators, Goisuè Greco, who actually used to be my assistant years ago, and now we write a lot of music together. He’s an incredible musician.

So much of the film’s emotional core rests on that intense, loving friendship between Luca and Alberto — what fueled your composing process when scoring for that deeply sweet dynamic?

I’ve had friendships that are very much like the friendship that these two boys have in my life, so there’s a lot to draw on there emotionally. But musically, a big part of that was making separate themes for each of the kids. And what I wanted to do was make all the themes live in a similar harmonic world, so that we could play them at the same time. I wanted to have a musical call-and-response between all the kids’ themes. A few times in the movie, you’ll have Luca’s fairly innocent, romantic theme start a cue leading up to one of the sequences, then swell into Alberto’s more adventurous theme. The plan was to be able to have them exist in the same world.

Was there a particular cue that was particularly exciting or challenging to score?

The hardest thing was the final scene — we had some temp score in there of some other stuff I’d done and I was figuring out what that was supposed to sound like, and its emotional feeling. I had the idea that it would keep building and building and building to this place where you didn’t think it could build more, but would just keep going. And we went through a lot of versions of that.

Honestly, the biggest influence on that song was the Weezer song “Only in Dreams” — with that build that goes for like three minutes before it just explodes. When I first heard that, I said, “Oh my God, I just sat through the most exhilarating experience of my life.” So that feeling of a non-stop build was what I knew I needed to accomplish.

You’ve got such a strong focus on regionality in your scores, but it mostly deals with regions of Americana. How did you approach Luca‘s Italian regionality in particular?

When you’re taking on a traditional music style, it’s like bowling with bumpers: there are so many things and confines in which you can work. With Italian music specifically, and I don’t want to speak for specific regions, but there are certain things you can do and it doesn’t sound like Italian music anymore. Same thing with American folk music; when you go outside of those limits, you can hear it. It’s a small world.

Compare that to film scoring, where there are all these ambient textures, and orchestras and recording, and having friends sing into an iPhone and text you the singing, that kind of stuff. Here are the five or six instruments we consider part of this music with folk music, and here’s the harmony you can play. When you have that as a starting point, the world is your oyster when it comes to expanding your sound. We have this as our starting point; what kind of textures can we add to bring it to a new level?

Are there any lessons you took from the process of scoring Luca that you think will carry over into future scoring?

Every project you do, you learn lessons and take those into the next project. And you learn a little something more every time. Every time you get inside another culture’s music, I think you learn a bit more about how to do it. It’s just a continuing process and spectrum of how to do your work.

Whether musically or otherwise, what do you hope audiences will get out of Luca, especially since it’s premiering almost exclusively on Disney+?

Wherever it goes, I’m just so excited for people to see it. I’ve been working on the film for a while, and we’ve been talking about it for such a long time. It’s like when you send your child off to school for the first time — you can’t wait to see how it fares out in the world.