Oh, to be an accidental genius like George A. Romero. He cast Duane Jones as his lead in Night of the Living Dead without thinking twice about the cultural impact of putting Jones in the role; he made Season of the Witch, AKA Hungry Wives, five years later and many decades ahead of the #MeToo movement; he made Diary of the Dead, his 2007 found-footage zombie movie, before “fake news” entered the lexicon and social media gained popular use as a tool for citizen journalists to document real-world atrocities and abuses of power. The man was prescient. Frankly, he still is even four years after his death, but only on a technicality.

Romero’s new-old film The Amusement Park, originally produced in 1973, arrives on the horror streaming service Shudder on June 8th. It’s a long-lost chapter in the father of the zombie film’s oeuvre — though “lost” actually may be too strong a word; “forgotten” fits better. “I think that a lot of people like the concept of a lost film coming back,” Suzanne Desrocher-Romero, the founder and president of the George A. Romero Foundation and Romero’s wife until his death in 2017, tells Consequence. “It was more about it being shelved.”

There’s something mythical about the narrative of a lost film being found, recovered, brought back to the people and given its rightful time in the sun; if nothing else it sounds cooler than the truth, which is that The Amusement Park was simply tucked away and forgotten rather than misplaced.

“I hadn’t heard about this film until 2017,” says Desrocher-Romero, “when our friend Giulia D’Agnolo Vallan, who was the curator and programmer for the [Torino Film Festival], used that film as part of a George Romero retrospective. She had a [16mm print] of it and a DVD.”

Milan sent both to Desrocher-Romero and Romero about three weeks before he passed away; they watched together, and Desrocher-Romero was gobsmacked. “He had never mentioned it,” she says. “Ever.” Not to her; not in thousands upon thousands of interviews with press over the course of his career. It’s as if the project slipped his mind, which is bewildering given that it’s smeared with his fingerprints — in a good way.

The Amusement Park clocks in at 53 minutes — aside from the three-minute opening monologue and even briefer epilogue —  and concerns an elderly man (Lincoln Maazel), dapper in his white tailored suit, spending his day at sunny fairgrounds, where everyone either ignores him, jostles him, forces him into situations he’s not comfortable with, and generally treat him like an inconvenience at best and refuse at worst.

There are no zombies here, no vampires, no homicidal maniacs; just people, who are frankly just as scary as the actual monsters of Romero’s cinema. His camera, manned by S. William Hinzman, captures the teeming crowds with the same eye as the ghouls in Night of the Living Dead: It shambles and hovers, creating a tilt-a-whirl sensation to throw the audience and the elderly man off their guard.

Hinzman and Romero’s technique is effectively creepy, which is probably why the film has sat gathering dust for almost half a century. “It was a PSA,” explains Desrocher-Romero. “It was made for the [Lutheran Service Society of Western Pennsylvania]…it was sort of a precursor to Meals On Wheels and other programs that the elderly now need continuous support for.”

Imagine the Lutherans’ surprise when they watched Romero’s efforts for themselves and found themselves staring at a nightmare turned celluloid. What a laugh. It’s best left to conjecture what, exactly, the LSS thought they were doing by hiring Romero to make a PSA about elderly abuse, but they certainly got what they paid for, and then let the movie moulder.

Then Desrocher-Romero received her copy of the 16, and after founding the George A. Romero Foundation in 2018, she made The Amusement Park her first project. With the help of Suzanne Schulberg, President and Executive Director of the film preservation group IndieCollect, the movie was given new life…despite the state the print was in. “Schulberg did the best she could with what she had,” says Desrocher-Romero. “It was in terrible condition.”

The work paid off, and she turned to Yellow Veil Pictures for sales and distribution. Co-founder Justin Timms echoes Desrocher-Romero’s sentiments about the print’s condition. “The first cut of the movie I saw was pre-restoration, and then I got to see it after,” he notes. Yellow Veil wasn’t involved in the restoration process, but Timms describes the situation as less than ideal. “It wasn’t restored from a negative,” he explains, which is atypical for how most restorations are performed.

Though Yellow Veil didn’t restore The Amusement Park themselves, Timms considers their part in its contemporary release something of an honor. “It was more like a responsibility than a job,” he says, noting that Romero is one of the company’s favorite filmmakers. “He’s a huge inspiration,” Timms says. “He’s part of the reason we’re working in the genre.”

Timms and his peers made sure to involve Desrocher-Romero and the Romero Foundation at every step of their process, from cutting trailers to producing artwork for the film, right down to the decision to team with Shudder; this worked to their benefit, because without Desrocher-Romero, copyright would have posed an obstacle. “She had to track down everybody who was involved in the original production in the 1970s and get them to sign off on it,” Timms recalls.

That sounds like a near-Herculean feat, but Desrocher-Romero managed it — and now, after all of that legwork, plus the cleaning and repairing that goes into restoration, The Amusement Park is finally open.

So what message does a PSA made 46 years ago have for us now in 2021 as the world slowly returns to degrees of normalcy after 15 months of COVID lockdown? For one thing, as Desrocher-Romero points out, the fortunate of us get old: “It’s an absolutely 100% guarantee. If you’re lucky, you’ll get old. If you’re not, you will pass before your time. So we all go there. It’s a fact of life. It’s what organic people do.”

The last year and change have also shone a light on how American society treats the elderly — with elder populations, especially in nursing homes, ranking among the most vulnerable to the virus. Eight out of 10 COVID-19 deaths are among people 65 and older; contextualized alongside certain nursing home catastrophes, the statistic grows even grimmer.

Romero had a knack for plugging into the pulse of society. It was his gift. What The Amusement Park means for us today is a chance to see that gift in action one last time. Desrocher-Romero hopes that her husband’s timelessness as a filmmaker translates to horror fans and cinephiles, though she admits that she was anxious about people rejecting it: “I was really afraid that people were going to expect a horror movie, and I was very afraid that the fans would find it disappointing.” She could count on Romero completionists to enjoy it, but others not as much.

Happily, this hasn’t been the case so far. In fact, The Amusement Park is a new opportunity for viewers to unpack Romero from the box pop culture put him in as a zombie auteurist. “I think that people see it for what it is,” she says. “They see the craft, the way he cuts it, the way he edits it, the weight.”

We all grow old, it’s true. But with The Amusement Park, Romero proves that growing old doesn’t mean growing out of relevance. 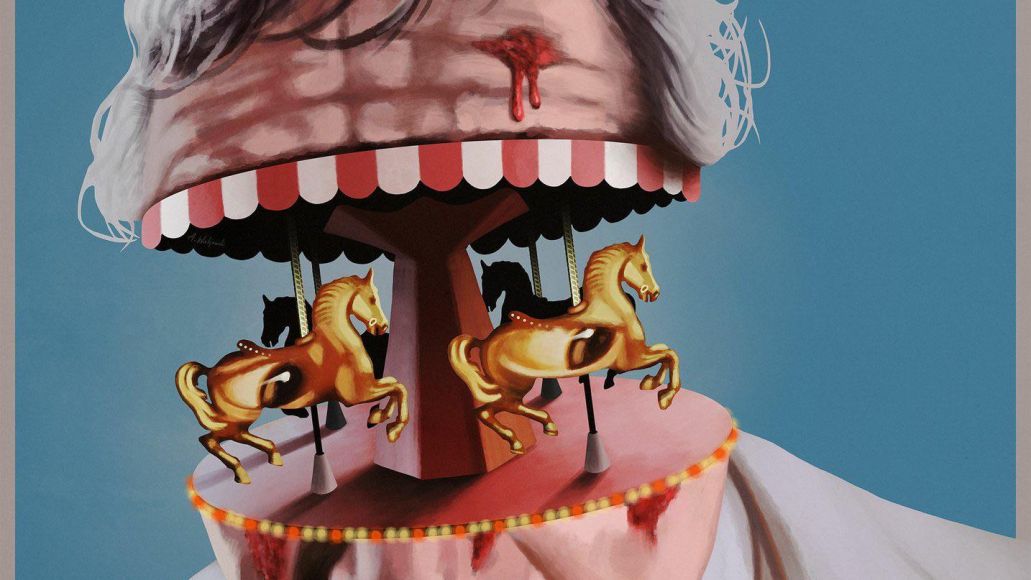