There was a time when Kid Rock was mostly known for his music, but these days the “American Bad Ass” is making headlines for one cringeworthy controversy after another.

The Detroit rap-rocker released a few under-the-radar albums in the early-to-mid ’90s before exploding with 1998’s Devil Without a Cause, which has since been certified diamond (!) thanks to songs like “Bawitdaba”, “Cowboy”, and “I Am the Bullgod”. He continued to achieve success on subsequent albums, offering a mix of heavy tracks and chart-topping adult contemporary ballads (“Picture”).

Lately, though, just about every time he jumps back in the news it’s because he’s ruffled some feathers — whether it be with his right-wing views, vulgar tirades against famous women, or, most recently, a homophobic slur during a barroom performance.

While it was hard to narrow it down, here are 10 times that Kid Rock was the absolute worst.

01. Screaming a Homophobic Slur During a Rant about Smartphones

Interestingly, Kid Rock’s Big Ass Honky Tonk Rock N’ Roll Steakhouse had just hosted Morgan Wallen’s first gig back after the embattled country star infamously uttered the N-word a few months earlier. Apparently, Kid Rock didn’t get any sound advice from Wallen about what not to do when the two were hanging out together that night at the Nashville bar.

02. Not Realizing Face Masks Were a Thing at a Presidential Debate

As a staunch supporter of Donald Trump, Kid Rock showed up to an October 2020 debate at Nashville’s Belmont University between the then-incumbent President of the United States and Democratic challenger Joe Biden. The singer and golfer John Daly, who attended the debate together, took their seats without face masks despite clear requirements to do so. They were handed masks by members of the debate commission and instructed to put them on. One picture hilariously showed Rock and Daly both looking at the masks in bewilderment before they put them on, only to eventually pull them down below their chins.

A month earlier Kid Rock appeared alongside Donald Trump Jr. at a Trump rally in Michigan, where he played a four-song set to the mostly maskless, non-socially distanced crowd. “If you believe in the leadership of Donald Trump, that you live and will always live and support, stand for the greatest country in the world, make some damn noise,” Rock shouted at the event.

U.S. professional golfer John Daly and musician Kid Rock are seen after being told to wear a face mask ahead of the final presidential debate at Belmont University.

03. His Nashville Bar Refusing to Close During the Height of the Pandemic

In March of 2020, when mandatory shutdowns of bars and restaurants went into effect in the beginning of the pandemic, Kid Rock’s Big Ass Honky Tonk Rock N’ Roll Steakhouse in Nashville refused to close its doors, even hosting huge crowds as the concert industry and pro sports came to a grinding halt. The bar’s co-owner Steve Smith did most of the talking this time, calling the Nashville mayor’s orders for bars to close during the pandemic “unconstitutional,” and adding that a patron at one of his bars “mentioned having lived through the polio epidemic and didn’t recall such extreme measures being handed down in history.”

After Kid Rock’s Big Ass Honky Tonk Rock N’ Roll Steakhouse was allowed to re-open as restrictions were (prematurely) lifted in June of 2020, the bar had its beer permit suspended for violating social distancing orders that remained in place. At that point, Smith labeled the Nashville government as “communist.”

04. “Honoring” the Late Kobe Bryant in the Most Questionable Way Possible

When basketball legend Kobe Bryant died tragically in a helicopter crash in early 2020, tons of tributes poured in from celebrities all over the world. Kid Rock, for some reason, felt that the way to honor to the NBA icon was to post a hunting pic of himself with Donald Trump Jr. and a dead deer, and mentioning that he also recently rode on a helicopter and that the rifle he used to kill innocent animals was nicknamed “The Black Mamba” after Bryant.

“Had a great hunt in South Texas last weekend,” Rock posted on Instagram. “The weird / crazy part of it all is that I took a helicopter (which I normally try to stay off of) to the airport Sunday to head home. While taking off I had a ‘more than usual’ very dark / eerie feeling. To make things even stranger, the gun I used to hunt was nicknamed ‘The Black Mamba’. I only met Kobe Bryant in passing a few times but really enjoyed watching him play and respected his work ethic. God bless you Kobe.” 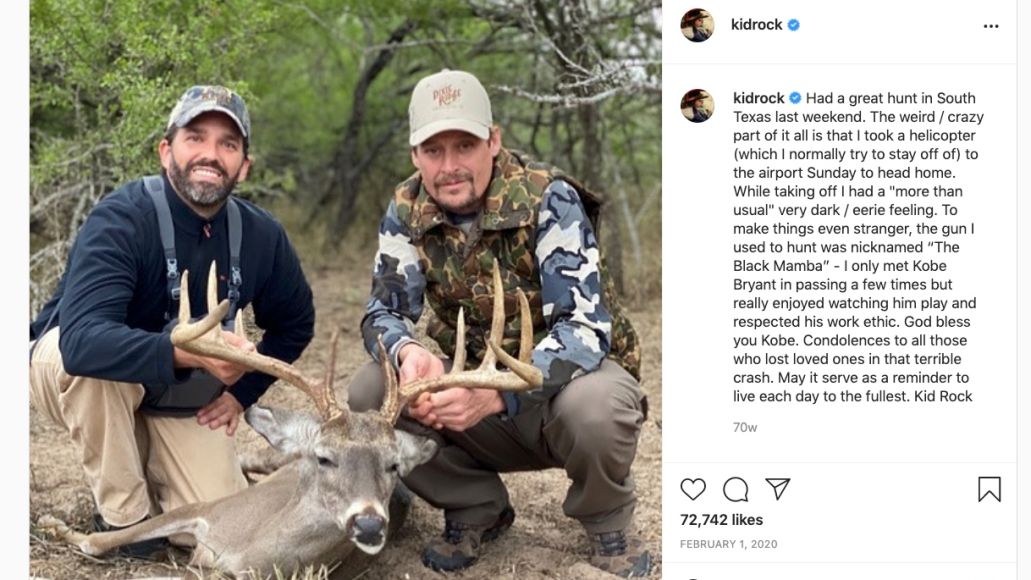 It’s one thing to call out another celebrity for their political views, but Kid Rock took it to the extreme in 2019 when he went after Taylor Swift with an especially lewd comment. “Taylor Swift wants to be a democrat because she wants to be in movies….period. And it looks like she will suck the door knob off Hollyweird to get there. Oldest move in the book. Good luck girl.” Gross!

Taylor Swift wants to be a democrat because she wants to be in movies….period. And it looks like she will suck the door knob off Hollyweird to get there. Oldest move in the book. Good luck girl.

06. Spewing Out a Vulgar Tirade Against Oprah Winfrey While Insisting He’s Not Racist

Who would publicly declare that the beloved Oprah Winfrey “can suck a d**k sideways” to a large audience at a crowded bar? Kid Rock is who. The singer drunkenly took the mic at Kid Rock’s Big Ass Honky Tonk Rock N’ Roll Steakhouse (where else?) in 2019 and started ranting about Oprah, Kathy Lee Gifford and Joy Behar. At one point he nearly incoherently exclaimed, “Oprah Winfrey, she’s like, ‘I’m gonna get white women to believe in this shit.’ Well, f**k her, she can suck d**k sideways.” When one woman shouted out that he was being racist, Kid Rock insisted that wasn’t the case. He then tried to sing “Proud Mary” before passing out onstage.

Kid Rock’s Oprah rant led to the Michigan National Action Network admonishing the rock singer, and to Kid Rock ultimately deciding to shut down his Made in Detroit restaurant. He later explained that he had a beef with Oprah because of an issue with her booking policy. “My people tried to get me to do The Oprah Winfrey show years ago and her people wanted me to write down 5 reasons why I loved her and her show,” recalled Rock. “I said f**k that and her. End of story.”

07. He Also Called Joy Behar a “B*tch” During an Appearance on Fox & Friends

With drink in hand, Kid Rock was interviewed on Fox & Friends in 2018, during which he said, “People need to calm down, get a little less politically correct and I would say, y’know, love everybody except… I’d say screw that Joy Behar b*tch… I mean, lady.”

Behar responded on The View, saying, “All I can say is this b*tch and these b*tches will be happy to have you on the show and have a beer.”

08. Defending the Confederate Flag and Wearing an American Flag as a Poncho

Kid Rock had long used a Confederate flag as a backdrop at his concerts, and he wasn’t apologetic about doing so. During a 2008 interview with The Guardian, Rock insisted, “I still use the confederate flag. Why should someone be able to own any image and say what it is? Sure, it’s definitely got some scars, but I’ve never had an issue with it. To me it just represents pride in Southern rock ‘n’ roll music, plus it just looks cool.”

The singer also wore an American flag as a poncho during his performance at the 2004 Super Bowl, leading Georgia Sen. Zell Miller, a former Marine, to call Kid Rock an “ignoramus with his pointed head stuck up through the hole he had cut in the flag of the United States.”

09. His Fake Run for Michigan Senate

In 2017, Kid Rock launched what appeared to be a ridiculous yet genuine campaign to run for Senator of Michigan. The campaign included an official website, merch, and even in-concert stump speech, in which he eloquently stated, “Now the issue of struggling single parents is an issue close to my heart. But read my lips, we should not support these women who can’t even take care of themselves, but keep having kid after f**ing kid! Of course we should help them out. I don’t want to sit here and sound like a jerk.”

After trailing in the polls, Kid Rock finally insisted that the whole Senate run was a hoax, and that he was just trying to drum up publicity for his new album. “Who couldn’t figure that out? I’m releasing a new album. I’m going on tour too. Are you f**king shitting me?”

10. That Time He Proudly Killed a Mountain Lion and Earned Praise from Ted Nugent

In 2015, Kid Rock went hunting for mountain lions, and was photographed proudly displaying one of his kills. Of course, he earned praise from Motor City Madman Ted Nugent, who shared the image of Rock holding the dead animal, and wrote, “And what a grand conservation New Year it is! HAIL my MotorCity boy KidRock for saving all those muledeer elk & livestock by whacking this magnificent mountain lion. I can hear the braindead squawkers already with their obscene denial that killing lions is wrong. It’s legal it’s necessary it’s good it’s beneficial it’s a damn riot!”

In a statement to Huffington Post, PETA representative Ben Williamson said, “It’s obvious that not everyone has evolved mentally and emotionally when you see someone grinning after gunning down another living being who was busy minding his or her own business and living life.”

Editor’s Note: This article has been updated to omit an incident involving Scott Stapp, and to include the mountain lion hunting incident.