When it comes to hard rock and heavy metal, few festivals are as stacked as Welcome to Rockville 2021. The four-day extravaganza takes place November 11th-14th in Daytona Beach, Florida, and promises a who’s-who of major acts and rising newcomers.

Last year’s festival was postponed due to the pandemic, and promoter Danny Wimmer Presents has more than made up for missing out on the 2020 edition by delivering a mouthwatering lineup.

Many of the bands who were scheduled to play in 2020, including Metallica, Deftones, and more, are back for 2021, while such notable acts as Nine Inch Nails, Rob Zombie, and more, have been added to this year’s fest, which now runs four days instead of three.

With apologies to all the other great acts on the bill, we whittled down the massive lineup to the 10 absolute must-see sets of the weekend. Pick up tickets to the Welcome to Rockville festival here, and see our list of the can’t-miss acts below.

Don’t forget to bring a plain white T-shirt so you can take home a blood-soaked keepsake from GWAR’s Welcome to Rockville set. The intergalactic Scumdogs are finally set to take the stage after an eventful pandemic of brand awareness. If any band took advantage of the downtime, it was GWAR. From recording a gut-busting acoustic EP to launching their line of CBD products, Bud of Gods, no time was wasted in the GWAR compound. Their return to the festival stage has been eagerly awaited by the human faithful.

L.A. rockers Dead Sara are our sleeper pick of the weekend’s sets. The band’s heavy alt-rock concoction comes to life in the live format, bolstered by the dynamic vocals of frontwoman Emily Armstrong and the big riffs by guitarist Siouxsie Medley. Dead Sara burst onto the scene in 2012 with the fiery song “Weatherman”, earning a strong buzz for their high-energy shows. After the band released the poignant “Hands Up” single last year, we’re curious to hear what else they’ve been working on when they take the stage at Rockville.

The release of Code Orange’s latest album, Underneath, appeared ill-fated — it came right as the pandemic hit on March 13th of last year. But the Pittsburgh band pivoted like true professionals, immediately hosting one of the first major virtual concert events when they streamed their album release “party” from an empty theater. Since then, Code Orange have kept up a quasi digital presence on Twitch and through well-produced livestream events. After seeing the band through a screen for over a year, seeing (and hearing) Code Orange live could be revelatory.

Sociopolitical rockers Fever 333 are one of today’s most powerful live bands, with singer Jason Aalon Butler becoming unhinged when he takes the stage. The band stole the show at the 2019 Sonic Temple festival, with Butler making his way into the stands and whipping the crowd into a frenzy. Combining hip-hop infused hardcore verses and nu-metal choruses with thought-provoking lyrics, Fever 333 are among the best of the relative newcomers playing Rockville 2021.

Georgia metal titans Mastodon’s highly anticipated new album is planned for a fall release — around the time of their Rockville appearance in November. That means new songs from the acclaimed quartet. Thankfully the band’s been good about offering a trail of hearty crumbs leading up to the LP’s release in form of one-off singles and soundtrack songs. Perhaps a few of those will make the setlist, too.

Need to take a respite from the hard-hitting acts that comprise most of the Rockville bill? Then settle into something more intimate and story-based with Amigo the Devil. The Austin troubadour spins captivating, often macabre tales about the beat and broken, motifs that have gained him favor in the metal community. We previously chose the singer-songwriter as our Artist of the Month back in April, so his Rockville set comes with our highest recommendation.

Punk rock luminaries Social Distortion thankfully remained on the Rockville lineup following the initial postponement. The band’s signature So Cal sound is often imitated but never duplicated. After being locked down for so long, just picturing legendary frontman Mike Ness howling “take away this ball and chain” from a festival stage in a post-pandemic world is enough to send chills down the spine. We’re there.

Deftones have been patiently waiting to play live since the pandemic paused their concert activity. The stage at Rockville sounds like the perfect place to hear the band’s mighty album Ohms if you aren’t able to catch their summer tour with Gojira. It was one of the finest full-length efforts of 2020, and we anticipate the setlist will spotlight the new LP, while also featuring favorites from throughout the alt-metal heroes’ stellar career.

Fresh off an induction into the Rock & Roll Hall of Fame in 2020, Trent Reznor got right back to work on a new Nine Inch Nails albums after winning an Oscar with fellow NIN member Atticus Ross for Best Original Score (Soul) earlier this year. Hopefully that means the industrial legends will grace us with some new music alongside their classic material. Either way, expect a visceral, visually captivating performance from Reznor and company, who always bring their A-game to their live show.

Metallica are headlining Welcome to Rockville by performing two unique sets on two different nights. Therefore you’ll have no excuse for missing the thrash legends. For the diehard Metallica fans attending both sets, it means even more deep cuts and hits from throughout the band’s career. It feels like forever ago since Metallica were announced as headliners for the postponed 2020 Welcome to Rockville lineup. We’re more than ready to catch the Rock & Roll Hall of Fame band in person once again.

Purchase tickets for the fest via the official Welcome to Rockville website. See the full lineup below. 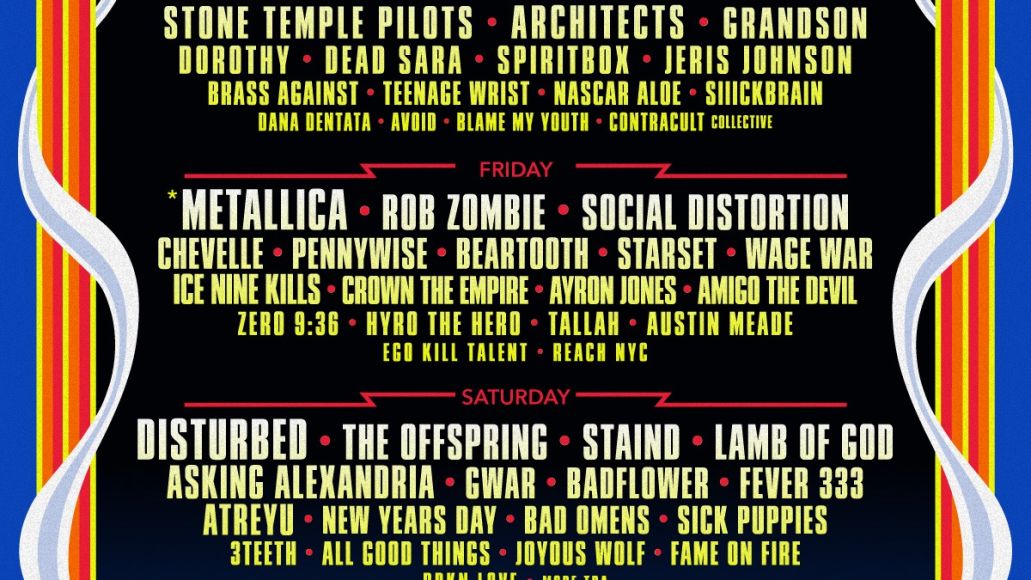 10 Must-See Acts to Catch at Welcome to Rockville 2021