Artist of the Month is an accolade awarded to an up-and-coming artist whom we believe is ready for the big time. In June 2021, we turn our attention to Brooklyn quartet Pom Pom Squad, whose debut album Death of a Cheerleader simply demands your attention.

When Mia Berrin started Pom Pom Squad in high school at age fifteen, the band name and social media handles preceded the music. “It’s like the people who buy web domains with the hopes that they’ll be worth a million dollars in a couple of years,” she jokes of grabbing the Instagram and Twitter handles before recording a single song. “That was me.”

Make no mistake: Despite the order of operations, Berrin valued music above all else. The Orlando-raised singer-songwriter had been learning guitar while messing around in GarageBand, and inspired by riot grrl — specifically, the idea of “being in a non-men band” — she asked around at her Orlando school to see if any other classmates were interested.

Unfortunately, the “one girl who played bass in the entire school” turned her down. “I didn’t know off the top of my head that I would turn it into something,” Berrin, now 23, remembers. But with her claim to the name in her back pocket, she graduated from high school and moved to New York to study production engineering. She also progressed from playing and singing alone in her room to performing live, first solo, then with a full lineup — female bassist and all.

Within a few years, Pom Pom Squad was officially “something” indeed.

Berrin — who is soft-spoken but quick with sarcasm, oscillating easily between humor and sincerity — cut her performing teeth first by singing with other bands around Manhattan and Brooklyn prior to forming her own group. (Bassist Maria Alé Figeman, drummer Shelby Keller, and guitarist Alex Mercuri round out the current Pom Pom Squad lineup.) “I felt like I hopped into this stage persona. I had no idea who I was, but I was very extra and that was great,” Berrin says. “It was a lot of self-discovery and picking up a skill that I had no idea I could do.” 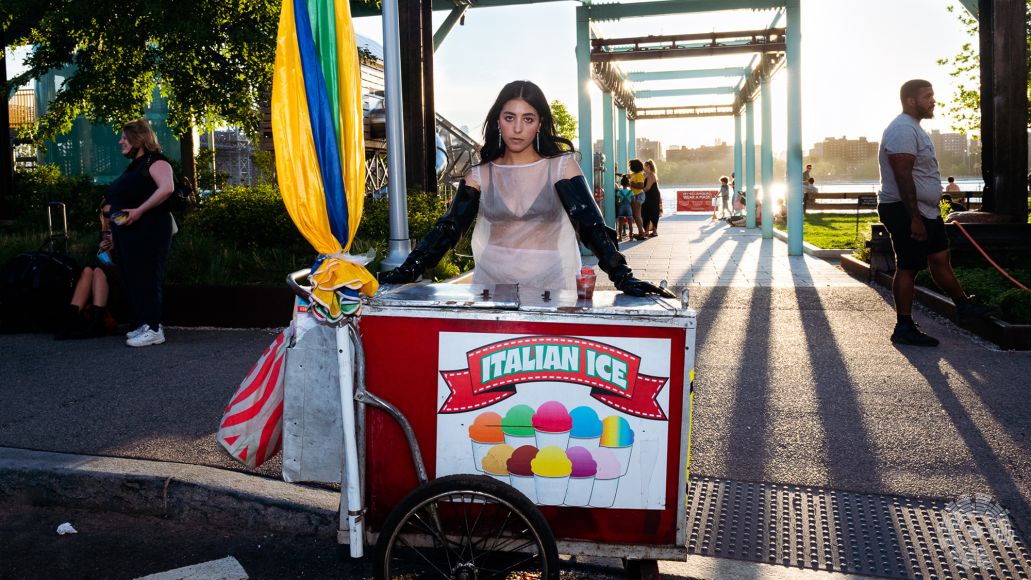 As the persona and band took shape, Berrin released singles and EPs through Bandcamp, gathering momentum with 2017’s Hate It Here and 2019’s Ow. Drawing upon indie rock, alternative, pop and grunge influences (at any given moment, Berrin’s sonic mood board might contain musicals, Ariana Grande, Weezer, or Kathleen Hanna), Pom Pom Squad quietly established itself as one of the most riveting rock acts to emerge in the last decade. By 2020, SXSW showcases and tours with The Front Bottoms were on the books, and the band was surrounded by enough buzz to warrant a professional-grade beekeeping suit.

The global pandemic, of course, had other plans. Berrin’s live commitments were put on hold, but she used the time to work on Pom Pom Squad’s debut album. The band’s first release via Germany-based indie label City Slang, Death of a Cheerleader (out June 25th) is the impressive culmination of Berrin’s musicianship to date.

The album includes material Berrin wrote while still in high school (astonishing lead single “Lux”), as well as in the first year of Pom Pom Squad circa 2017, and up to as recently as over the pandemic. There’s even a twist on Tommy James and the Shondells’ “Crimson + Clover,” a nod to Pom Pom Squad’s track record of covering songs that might seem un-obvious for a punk/grunge/pop band. “The thing I learned on this album the most is, ‘What else I can pull out of my toolbelt?’” Berrin says. “I didn’t think I had the ability to make arrangements like I did on this record, [and] I’m excited to push that even more.”

Familiar ears will notice that Death of a Cheerleader is also Pom Pom Squad’s most aurally dynamic project yet. Berrin explains that while her “typical mode” is punk and grunge, the pandemic had her leaning into her love of pop and musical theater, and spinning Motown and jazz standards. “I loved the fantasy element of that genre, and how it doesn’t really sound grounded in reality or in a physical space,” she says. Her pandemic listening habits inspired sweeping songs like “Crying” and the album’s final track, the luminous “Be Good,” which took her “out of the grunge genre to make something really pretty and floaty and cinematic.”

Meanwhile, Berrin chose a handful of collaborators to round out her recording team. Sarah Tudzin of the Los Angeles indie rock band Illuminati Hotties co-produced (“Sarah is just amazing — it felt like an easy collaboration”), and Tegan Quin of Tegan and Sara sings backing vocals on the thunderous “Head Cheerleader.” That collaboration was born out of social media, when Quin reshared a post Berrin made about racial equity in March 2020.

Having first seen Tegan and Sara live when she was a freshman in high school, Berrin was ecstatic. “I DM’d and we FaceTimed,” she recounts of connecting with Quin. “It was very surreal. I was like, ‘I’m going to see how far this can go before she stops answering me.’” Pretty far, as it turns out.

Like with almost all things that happen in the Pom Pom universe, though, such collaborations are dreamt up in Berrin’s mind, then she makes them come to life. It’s less about luck and more like a self-fulfilling prophecy.

Whether you’re a longtime fan or just tuning in, you’ve likely noticed the whole, you know, cheerleader thing. It’s not just a persona that Berrin plucked from Pinterest; rather, her Orlando high school’s “jocks and cheerleaders and nerds and extremely John Hughes movie realness” influenced her long before she formed a band.

As Berrin navigated an environment full of stereotypes, it was cheerleaders that arose as a “powerful, feminine figure that I admired and that I strived to be and that I was attracted to.” The cheerleader was a constant — something for Berrin to anchor herself to when there was no equally desirable lane for a young, queer person of color.

She adopted the cheerleader iconography into her music; band name and song titles aside, that timeless Americana aesthetic is often present in her visuals, photo shoots, and as an on-stage costume. How differently everyone takes what Berrin calls her “drag persona” is an endless source of amusement to her. “The amount of times in the first year of Pom Pom Squad where people would come up to me after a show and be like, ‘Oh, I expected to hate you,’ because of the name and because I was dressed as a cheerleader… It’s interesting,” she says. “It was empowering, in a way, to put on a bitch costume and be the bitch!” 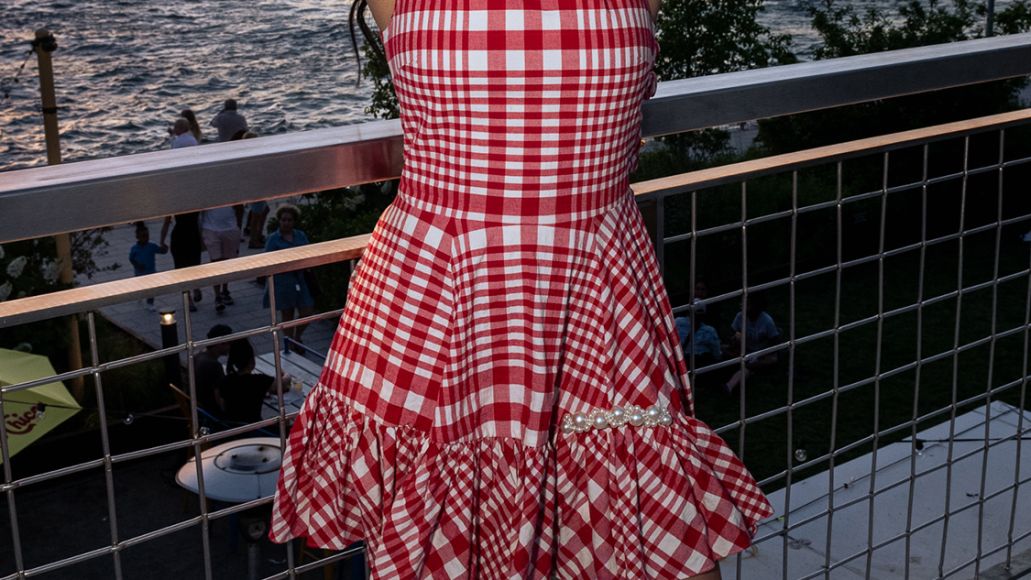 Whether Berrin will once again don the cheerleading costume when Pom Pom Squad hits the road this summer remains to be seen; in fact, the entire stage setup is still in the air. “Touring felt so far away when I started writing in March [2020],” Berrin admits. “Do I know how we’re gonna do it? Nope.” Dates are on the calendar for the first time since 2019, and while she reveals she’s “actually very embarrassed and nervous about performing a lot of the time,” she’s excited to reclaim the “very magical” sensation of being on stage. (Editor’s Note: Snag tickets to all Pom Pom Squad’s upcoming dates via Ticketmaster or here.)

If Hate It Here and Ow were the base, then Death of a Cheerleader is the flyer at the very top of the Pom Pom Squad pyramid; this album is just about the biggest stunt they’ve ever pulled off. So naturally, Mia Berrin is already thinking ahead to bigger and better. “A choir, strings section, I want a whole thing. I want crazy sets and props and visuals and choreography,” she muses. “I want to go full pop star.”

Wherever she takes Pom Pom Squad next, we expect to be rooting for them for a long time. Watch our full interview with our June Artist of the Month above. (If you have trouble viewing the embedded player, you can watch on YouTube.) 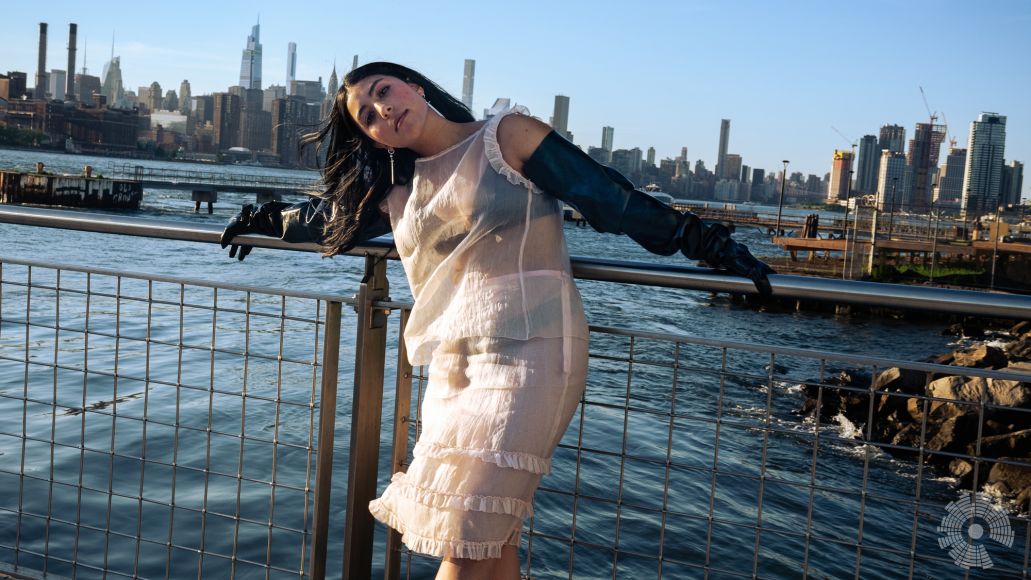