With our Track by Track feature, artists guide listeners through each song on their latest full-length. Today, alt-pop singer REI AMI dissects her debut mixtape, FOIL.

Maryland-by-way-of-Seoul artist REI AMI burst onto the scene in 2019 with the explosive singles “MAKE IT MINE,” “DICTATOR,” and “SNOWCONE.” Aside from her penchant for a sticky chorus, she’s also quick with a pun-ny verse, as she raps on the gloriously chaotic “MAC & CHEESE”: “I got the bag straight cheddar/ Call me the GOAT like feta/ Just copped a boat I’m wetta/ Flex like Post I’m betta!”

FOIL marks REI’s first longform release, following a string of versatile one-off tracks and singles over the past few years. Through creative visuals and melodic structures that never end up quite where you expect, REI has built a loyal fanbase that obsesses over not only her artistic imagination, but her playful personality and relentless sense of humor, too. (She was also quickly co-signed by Billie Eilish, and walked in Rihanna’s Savage x Fenty runway show in 2020.)

If you listen carefully, you’ll notice that much of REI AMI’s work incorporates a clever concept symbolized by her artist name: there’s “REI,” the pounding, bad-bitch side, and “AMI,” the acoustic, sad-girl side. Sometimes, both halves collide in a single song (see: “SNOWCONE”) both through lyrics and melody; when that happens, it’s a surprise and a delight.

FOIL was preceded by the singles “THAT’S ON YOU!”, “do it right,” “F.R.A.” and “Ricky Bobby.” Find about more about those and all the tracks on the mixtape by reading REI AMI’s Track by Track breakdown after the stream below.

“FOIL”:
I just want to clarify that I did not title my first-ever project after aluminum foil, so let’s get that out of the way. When I say “foil,” I’m referring to foil characters. A foil character primarily exists in literature to really highlight the main character’s personality and characteristics. A good example would be Harry Potter and Draco Malfoy. Malfoy is a direct foil of Harry Potter (Gryffindor vs. slytherin; good vs evil). If Malfoy did not exist and didn’t harass Harry like he always did, we wouldn’t understand Harry for who he truly is and what he believes in.

So for this project, each song represents a certain side of me. I thought it would be unfair of me to try to adhere to a specific sound or a style because that’s not me; I’m very chaotic and my interests are very different. Why should I have to pick and choose? I don’t have to, and it’s so important that my fans hear every song and hear all these different sides of me because yes, it’s different, but it’s still me — they’re pieces of me and as a whole they create REI AMI.

“reivelations”:
“reivelations” refers to Revelations, the last book in the New Testament. I grew up in a very religious household and I was always drawn to Revelations because it was just straight chaos; monsters, the rapture, the end times.

Even though I’m not religious, I now feel that my religious upbringing shaped me profoundly into who I am today. It definitely spills over into my artistry, and so as the first track, I wanted to pay homage to those inspirations. And I also wanted to include my favorite quote that I live by which is “you may be a dumb bitch, but you are not a weak bitch,” meaning you may make mistakes and you may do stupid shit but that doesn’t necessarily make you a weak or bad person. As long as you learn and grow from the experience, you’re gonna be fine.

“EVERYBODY ELSE”:
“Everybody Else” is a short track, because it’s honestly just a really fun upbeat song. I know a lot of people are going to be mad because it’s only like a minute long but it’s pretty much about everyone in the music business. Honestly, I just kind of wanted to talk my shit but make it sound really cute — it’s really not that deep, though.

“RICKY BOBBY”:
Talladega Nights is one of my favorite movies and I like to imagine myself as specific characters when I write my songs. I really wanted to write a song inspired by Ricky Bobby’s character because I think he’s such an iconic character who goes through so much growth. I definitely resonate with his journey in a way, so I wanted to pay homage to one of my favorite movies by making a song inspired by the main character.

“damn.”:
“damn.” was actually titled “forget” but I decided to change it last minute because I ended the song with the word “damn.”, which is one of my favorite Kendrick Lamar projects. This song is very emotional; this was the only song that was recorded, written, and produced at my house. I brought my mattress out to the living room and built a fort.

I had been going through some shit, so I just started writing. I wrote the entire song in one hour which is, for me, unheard of. Then, Christian Blue, who was pretty much my right-hand man for the project, pulled out his laptop and started making a beat around it. We tracked the whole song and by that time, it was like 2:00 AM and honestly it was so fucking therapeutic and healing. I didn’t realize I needed to release that much. This song is definitely one of my favorite tracks on the project because of how emotionally attached I am to it.

“REI AMI”:
REI AMI is a self-titled track — it’s pretty self explanatory. I just talk a lot of shit in it and I just feel myself. I made this song because I want my fans to mosh pit while reciting my name on some cult shit, you know, because I think that’s really cool.

“CHERRY CHAPSTICK (feat. Lolo Zouaï)”:
“Cherry Chapstick” features one of my favorite artists, Lolo Zouaï, and it was so random how the feature happened. In the winter of 2019 I was recording with her primary producer Stelios, and the song didn’t have a second verse and I kind of completely forgot about it. Then in November 2020 I was in San Francisco, where she’s originally from, and then she just texted me a Dropbox link and it was her verse on “Cherry Chapstick.” I freaked out because she just KILLED it and blessed the track and for that, I’m eternally grateful. I really hope you guys like it, ’cause it’s such a fun song!! 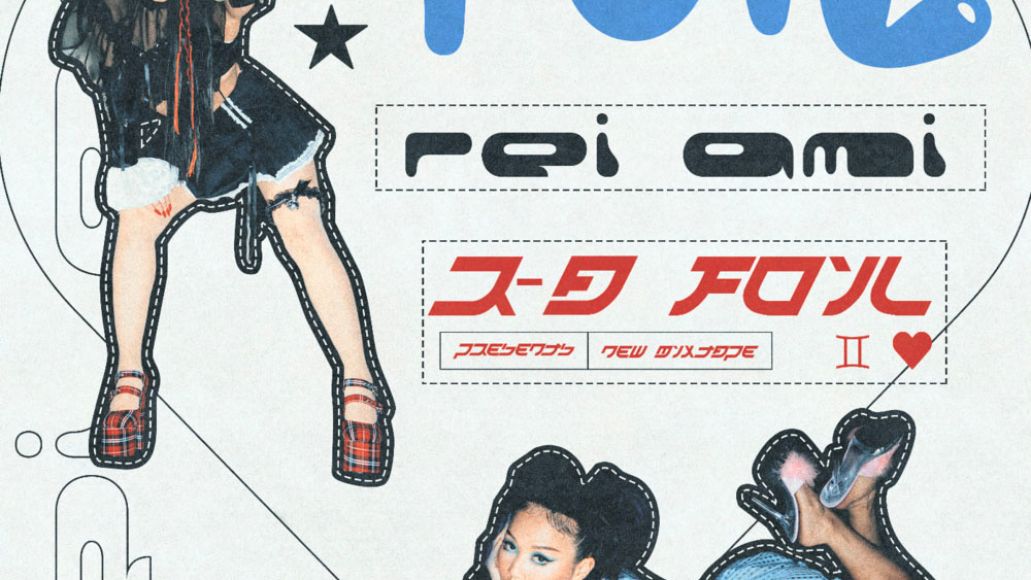 “saturn emoji”:
Saturn emoji is a traditional REI AMI song in that it has a transition between the “REI” and “AMI” vibe, but this time, it’s flipped. I’ve done transitions before, but it’s always started with REI and then went straight into AMI, never the other way around. I just thought it would be really fucking cool to reverse it, because I had never done that before.

“THAT’S ON YOU!”:
“THAT’S ON YOU!” is another traditional REI AMI song. The first half is really sassy and is a big “fuck you” to people who don’t actually give a fuck about you and only engage with you for their own benefit. The second half reveals why I feel the way I do in the first half. It really sucks when you realize that some people are just shitty and there’s nothing you can do about it. Because at the end of the day, the only thing you can control is yourself.

“F.R.A.”:
FRA stands for “Fucking REI AMI.” It’s a song literally about my boyfriend. It’s not deep at all — I just wanted a song to brag, because I can. If I fucking love you, I will let the entire universe know, thank you very much.

“do it right (feat. Aminé)”:
“do it right” is about wanting to start over. It’s about new beginnings and a fresh start. Honestly, I feel like we often find ourselves reflecting on our past… on what we could have done better or what we shouldn’t have done. It’s OK to feel that way, because reflecting on past situations can help you grow and learn from your mistakes.

I don’t think it hurts to think about your past. I think it’s so necessary in order for you to grow as a person and so I feel like “do it right” perfectly captures that. And of course with Aminé blessing that song, he just made it better and took it to the next level. This song always makes me cry.