In a twist of our new music feature Origins, Jimmy Eat World’s Jim Adkins explains the inspiration behind their new graphic novel, 555.

Z2 Comics have quickly become the go-to company for music-related graphic novels. Amongst their many projects, they turned Sturgill Simpson’s Sound & Fury into a stunning visual anthology, illustrated the origin story of Blondie in Against All Odds, and got artists like Slipknot’s Corey Taylor to pen chapters for an adaptation of Anthrax’s Among the Living LP. Now, they’ve teamed with Jimmy Eat World to create a graphic novel expansion of the world the band created in their video for “555.”

When it came to making the video for “555” — one of the singles off JEW’s latest album, Surviving — the band were forced to do something on the cheap. They dressed frontman Jim Adkins up as a creepy intergalactic taskmaster named KLARRG, and used some simple CGI trickery to create his army of slaves, the cloned Kudj Kram. But besides that and a fancy space chair, there really wasn’t a lot going on in the video.

And yet, as Adkins explains in our latest Origins feature, there was so much more behind the concept. KLARRG had motivation, and empirical pathos, and a job. It wasn’t until Jimmy Eat World connected with Z2 that they were able to expand on all that unseen history and create the 555 graphic novel.

“With all this backstory and with the video turning out rad, we felt it would be a shame to let it just end. The video pretty much is a live-action comic anyway. Z2 Comics was the best partner to do this with because they have experience working with people outside the comic world to make something good. They put me in touch with the writer, Alex Paknadel. I shared what I knew about the backstory and a very basic arc of where KLARRG could end up emotionally. After that I let him just go. He had total freedom to take it wherever he thought was interesting.

The illustrator Koren Shadmi was enlisted to draw because I felt his take on Sci-Fi was spot-on for the tone. Just a really great mix of presenting the unexplainable and unreal with a sense of total immersion, helplessness and struggle.

I really couldn’t be happier with how the comic turned out!”

For an early peek at what Adkins is talking about, check out some exclusive first-look pages from Jimmy Eat World’s 555 below. Then read on for more of what the band’s frontman has to say about the Origins of the comic, as well as the music video that inspired it.

Jimmy Eat World have a number of US tour dates set for this summer and fall, with European shows already lined up for next year. Check for tickets at Ticketmaster or here. 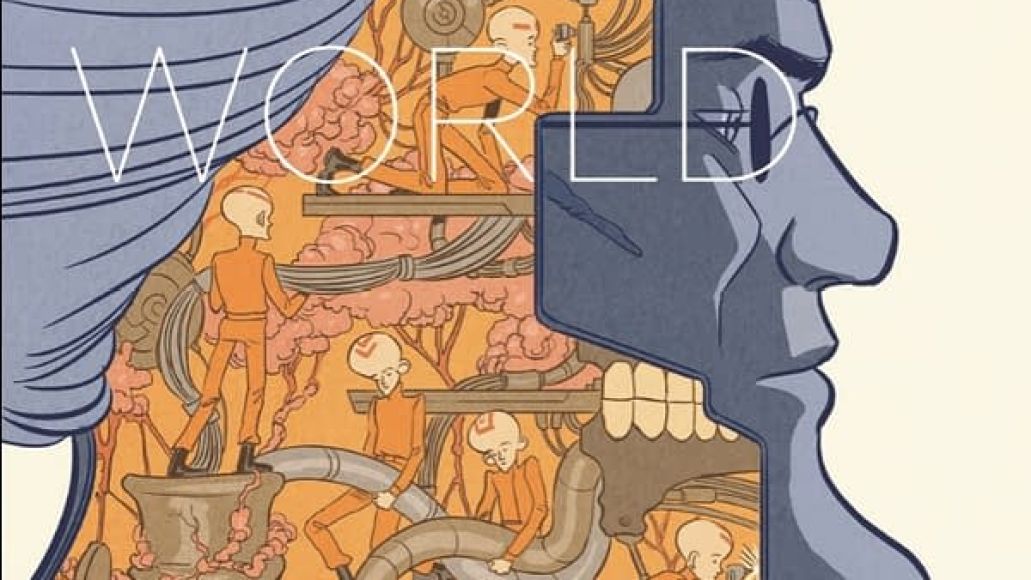 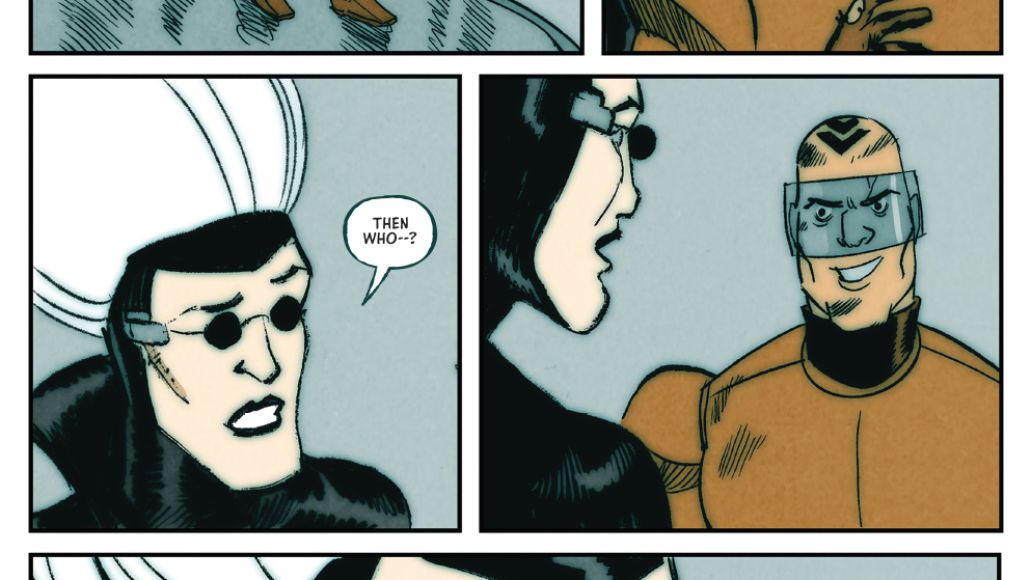 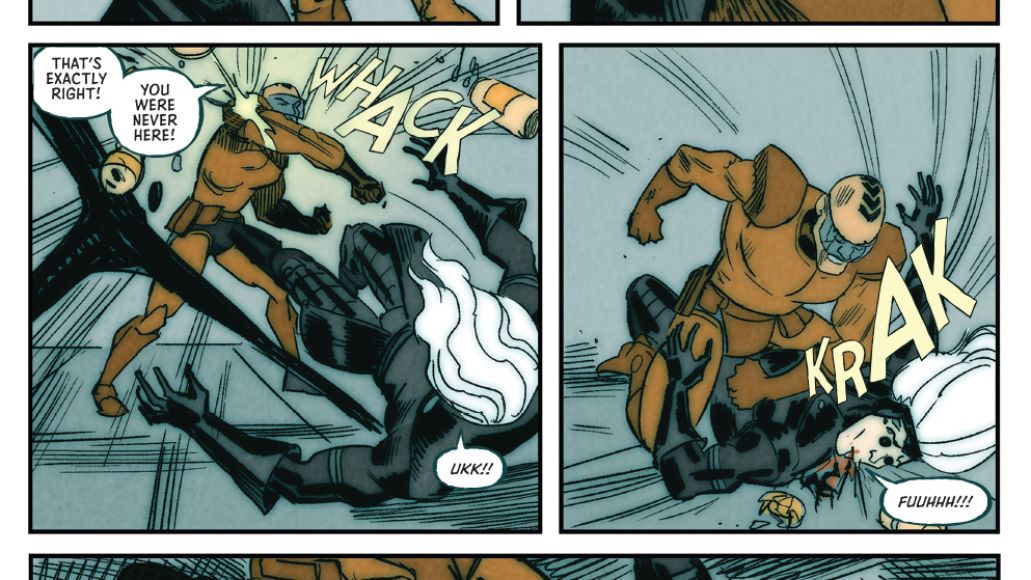 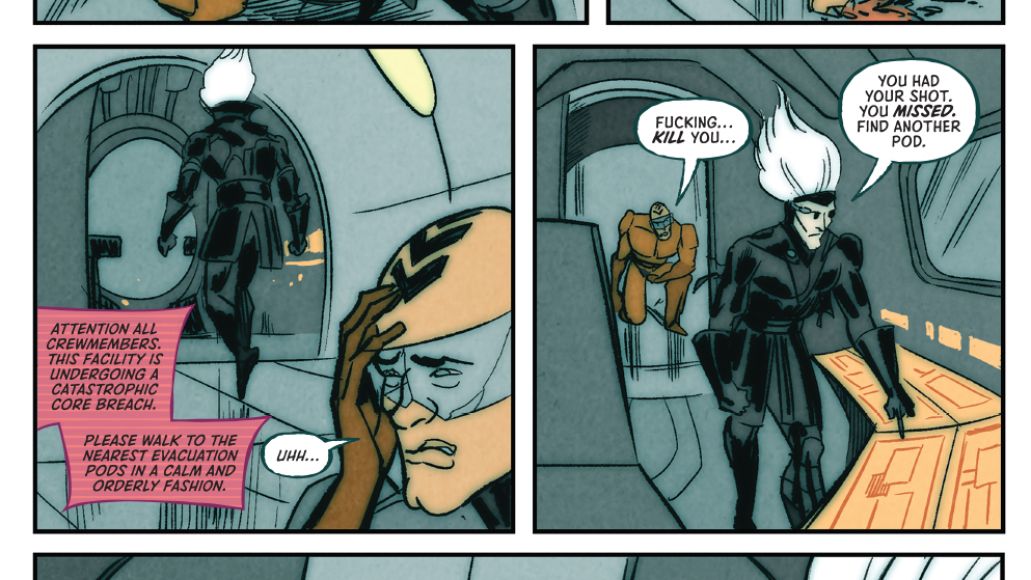 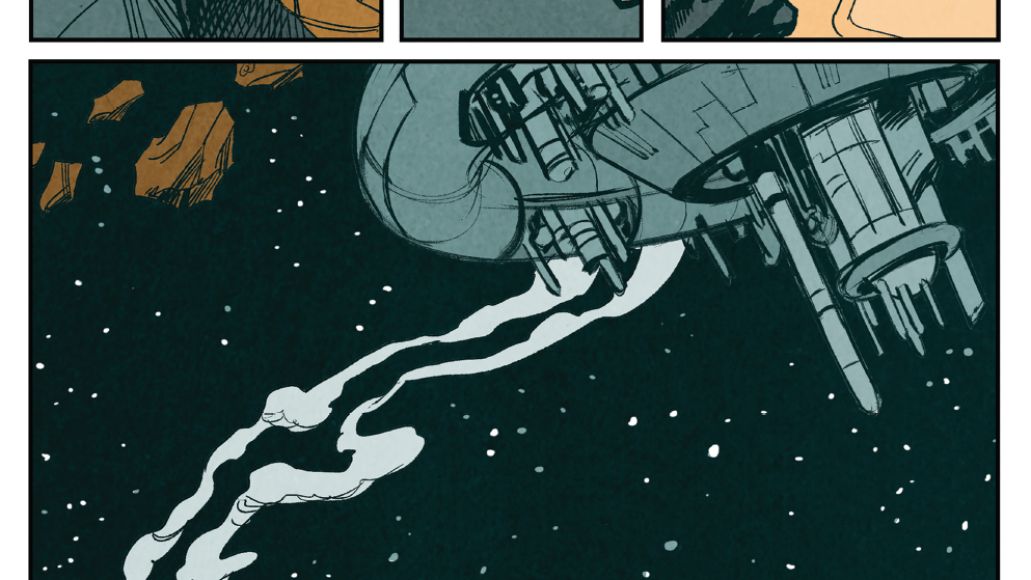 The real origin story starts with us on tour in the UK supporting Frank Turner. We had most of a day off in Bournemouth and while I was walking around in every winter clothing item I had, it started snowing. I was kind of far away from where we were staying so I was forced to make my way through the snow along the water. Somewhere out there the low bass synth chord progression and the beat idea just showed up. When I got out of the weather I used a crappy piano app and made a voice memo. It wasn’t until we got back to Arizona and our studio that I had a min to really work on fleshing it out.

Ready for the World — “Love You Down”:

How the song sounds is due to the fact no matter how many hardcore shows I went to in my teens, I can never escape the influence of pop radio in the mid-early 80’s. Especially the roller-rink slow jams. The music of “555” is basically my version of Ready for the World’s “Love You Down” with a dash of Force MD’s “Tender Love.” Both songs of which I had on our house walk-in music playlist at the time.

The song is about acceptance. When you think your problems are the world against you… it’s mostly something on YOU. 9.997 out of 10 times, yeah… your problems are something you may not be getting honest with yourself about. That defensiveness of your ego to keep trying to control everything is what gets you in more trouble.

Rick Springfield — “Bop ‘Til You Drop”:

Before our album Surviving came out, we wanted to make videos for a few of the songs. People are way more likely to give something a try if there is a video component to it. “555” felt like a special song. It was important for us to make a video but we were mostly tapped out of whatever video budget our label was allotting us. So we needed something we could do on our own, meaning… as cheap as possible.

Thinking of the kinds of videos on MTV during the times of radio playing Ready for the World was an inspiration. Rick Springfield’s “Bop ‘Til You Drop” is one of my favorites. I thought about the intention of the song and then the reptilian overlord keeping the indentured workforce going in “Bop ‘Til You Drop.” From its perspective, that was a pretty bad day. Here it is, just trying to meet its quota of whatever it is the workers are supposed to be doing. Probably feeling overlooked and under appreciated by its superiors. The tunes at work suck. Then when finally someone plays a jam its open rebellion all of a sudden. Great.

Kind of reminds me of the perspective of the executioner in Blazing Saddles complaining about he is so overworked. Or in Team America where the Kim Jong-Il character has the “I’m So Ronrey” number. I thought the “555” video needs an anti-hero who is complaining about their life. A character whose life is making other beings unhappy. And going with a sci-fi direction works with no money because if it looks “budget” it almost works better. 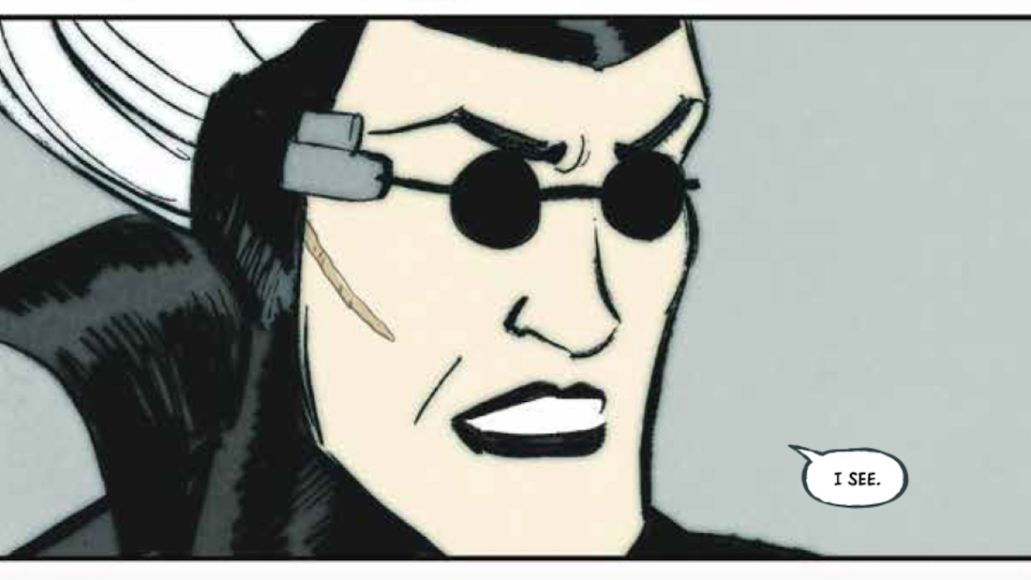 I came up with a basic backstory. It was important that it didn’t feel ironic while the FX level felt lame. That is what will really connect with people. It’s such a huge hook when you have to stop and check yourself if what you are watching is supposed to be a joke or not.

The main character is KLARRG (yes, always all caps). He is based on the reptilian bad guy from “Bop ‘Til You Drop.” Hence one of the only props in the video is a chair that took half of the budget to rent for a day. There is a little DUNE scientist bad guy vibe happening too. He feels way more important than he is within the Borg-like evil galaxy conquering empire he is a small figure in. Overseeing a cloned workforce producing… I don’t know, energy units or some junk. In reality he is sort of an embarrassment. Not nearly as evil or powerful as he thinks. 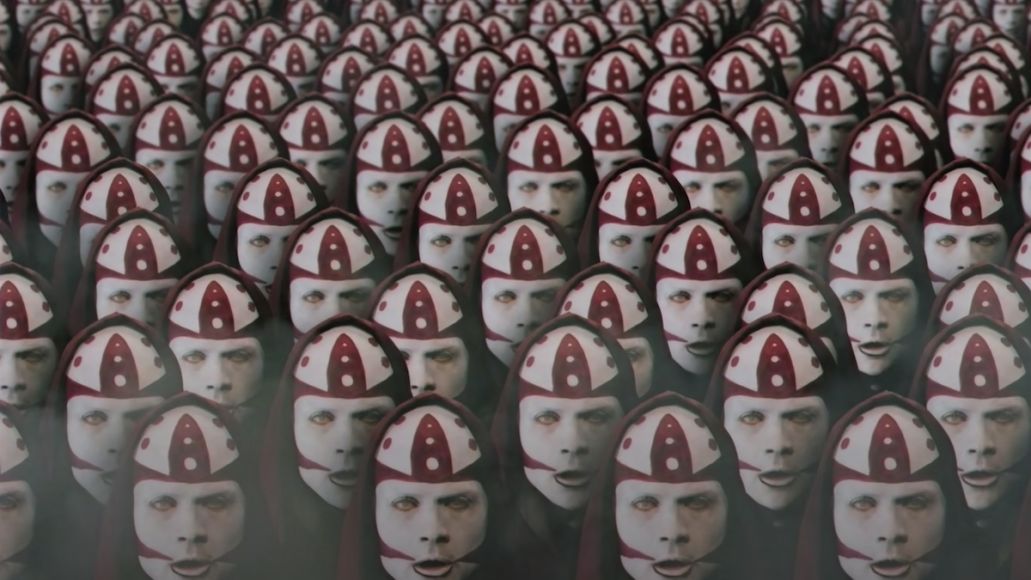 The workforce came from a super-powerful civilization who were extreme pacifists. They were taken over pretty easily but KLARRG’s bosses knew they could rise up at any moment and rebel. As a kind of governor measure they took the most slacker and least powerful individual and made all their clones him, destroying everyone else. So KLARRG’s minions are all called Kudj Kram, which is the the name of the one individual they kept to clone. Mike Gill, the producer and co-director of the “555” video thought of that name by accidentally misspelling the backward name of the actor who played KLARRRG’s minions, Mark Jude Sullivan.