Let’s face it: comparing the first Space Jam to its new sequel, Space Jam: A New Legacy, is a bit like the tagline for Alien v. Predator — whoever wins, we lose. It’s a battle of competing corporate synergies, the ultimate showdown of a series dependent on the scintillating synthesis of family-friendly franchises and merchandisable brands.

Few good things come from properties adapted from the cocaine-addled musings of corporate ad executives (Ted Lasso being pretty much the sole exception), but the 1996 feature-length followup to the 1993 “Hare Jordan” commercial, in which Bugs Bunny and His Royal Airness Michael Jordan team up for a little b-ball, scored $250 million dollars on an $80 million budget. So it made money, at least, even if it rotted the respective brains of ’90s kids everywhere (myself included).

Now, 25 years later, the long-dormant sequel is out, the Malcolm D. Lee-directed Space Jam: A New Legacy, starring the closest thing we have to a modern MJ: LeBron James. And this time, the kid’s-film canvas extends beyond the loopy slapstick of the Looney Tunes to the vast, all-encompassing breadth of WarnerMedia’s umbrella of franchises, from Game of Thrones to Hanna-Barbera and beyond.

It’s bad in many of the same ways as the first (and several new ones), making its own mistakes while attempting feebly to address the many shortcomings of its predecessor. But in what specific ways does it falter? And in what ways might it actually improve on the rock-bottom expectations of the first? Let’s lace up, hit the court, and find out. 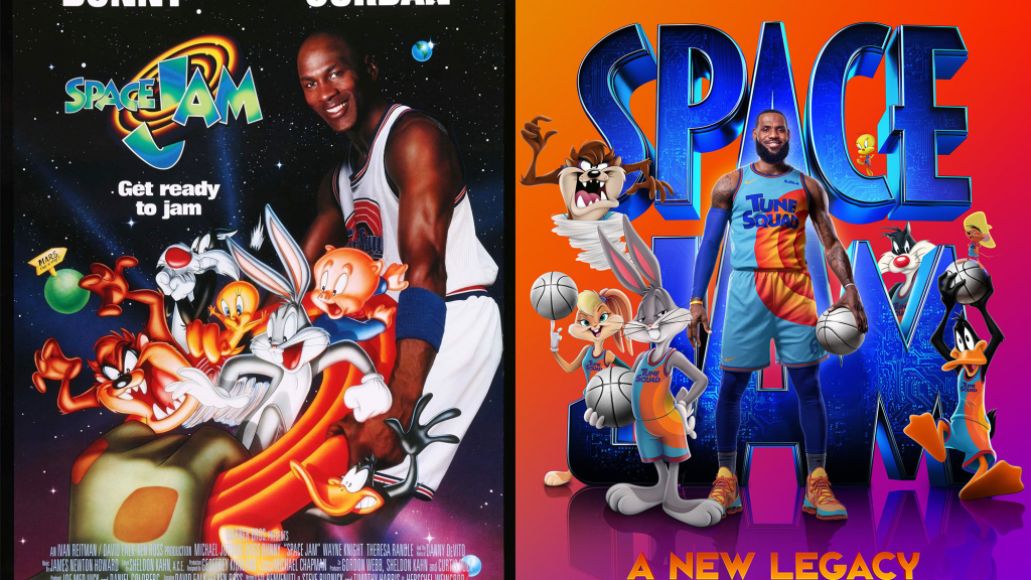 The skeleton of a Space Jam film is so deceptively simple, it hardly needs to be adapted from the cocktail napkin on which it was first scribbled: Take a popular athlete, dump him in a world of branded characters (preferably American icons the Looney Tunes), and have them play basketball. It’s an innately cinematic sport (when done right — see Hoosiers and Coach Carter), and theoretically lends itself to the kind of slapstick antics the Tunes made their stock in trade.

Here’s the problem: with few exceptions, athletes can’t act. And in the case of Michael Jordan (bless his heart and his hops), he really can’t act. Much of the 1996 film sees him staring blankly at one tennis ball after another, mumbling one stilted line after another with little to bounce off beyond the court. In a lot of ways, I feel for the guy: this isn’t his bag, and so much of his appearance here feels obligatory, a contractual hurdle he has to climb in order to get the kind of payday he knows he needs to cash in on before his star fades.

Even absent many non-animated co-stars, MJ is barely a character in this: Space Jam ostensibly has him rediscover his love for basketball after quitting to try a baseball career — a move that so echoes real life that the story feels like a way to launder his eventual real-life return to basketball under more honorable circumstances — but shows us little about how Jordan feels about the situation.

In this respect, A New Legacy shows marginal improvement: LeBron is marginally more comfortable in front of the camera, as his sharp cameo in Trainwreck showed us a few years back. But he’s just as adrift as MJ here, perhaps even more so given the sheer volume of IP he has to swim through just to be seen. That’s partially a consequence of the screenplay (the Frankenstein’s monster of six writers) whittling down his persona into that of a stern, uptight dad who visits his own childhood dedication with focus and perfection onto his son (more on that later).

Sure, he gets more to do, and has slightly more of a twinkle in his eye, but both Space Jams let down their respective protagonists.

The Tunes vs. Warner Bros.

As with so many things about A New Legacy, the biggest problem with the sequel is its dedication to its own hollow pursuit of brand recognition. Where the first was content to simply mash together Popular Sports Star with Popular Kids’ Entertainment Franchise, Warner Bros. decided to essentially turn Space Jam: A New Legacy into a commercial for itself.

Space Jam, Original Recipe tosses Michael Jordan into the Looney Tunes-themed Tune Land for some simple, straightforward contrast between the reality-warping buffoonery of cartoon animals and the straight-laced human ability of one Air Jordan. It’s simple, and stupid, and still pretty corporate, but the mashup makes sense.

In A New Legacy, we move from Tuneland to the whole of Warner Bros. extended franchise collection thanks to the “Serververse,” the company’s repository of digitally-stored characters and properties, all living out Matrix/Ready Player One-like lives on their respective “worlds.” And while the core of the film is still Baller + Tunes, A New Legacy eats up a heaping helping of screen time with LeBron and Bugs zapping around the Serververse, going from world to world to collect all the various Tunes who’ve spread themselves out among the company’s vast portfolio.

Admittedly, this montage is the most dopamine-producing segment of the two-hour monstrosity; try not to guffaw when you realize that, yes, we’re going to rescue the Road Runner and Wile E. Coyote from Mad Max Fury Road, of all things. But that feeling of “hey, I recognize that!” quickly gives way to confusion and exhaustion, especially by the time the actual game rolls around and the stands are packed with a murderer’s row of Warner characters both popular and obscure.

Who Is This For?

With so much IP-laden baggage thrown at you for the sequel, A New Legacy ends up simply exhausting you, deadening your eyes as you realize you’re merely a puppet in a different kind of game, one Warner Bros. is playing on your soul and your kids’ sense of imagination.

Much like Ready Player One before it, Space Jam: A New Legacy is simply committed to stretching the confines of brand synergy as far as it will go. It’s not a story about LeBron James learning how to listen to his son and lighten up a little, or of Bugs Bunny realizing he’s pushed away the only friends he’ll ever have. It’s the story of a company trying to see what it can get away with, hoping to rest its fortunes on the endorphin hit of surface-level recognition that will light up Twitter threads and breathless YouTube reaction videos.

Suddenly, going back to the original 1996 Space Jam feels downright quaint, its premise deceptively simple and delightful. That film, for all its capitalistic origins, at least occasionally pretends to be about Michael Jordan’s career aspirations (and the flood of people who surround him, human and toon alike, who yearn for any kind of proximity to his light). And when it’s not about that, it at least throws in an endearingly strange subplot about fellow players Charles Barkley, Muggsy Bogues, Patrick Ewing, Shawn Bradley, and Larry Johnson wandering aimlessly in the wake of having their basketball talents stolen by evil aliens.

No one understands the assignment in A New Legacy like Bill Murray in the first one, sauntering onto the movie like an agent of chaos because (as he openly admits) he’s friends with producer Ivan Reitman. There, the best we can hope for is Don Cheadle, smiling gamely through his role as an overbaked, underwritten algorithm (named Al G. Rhythm, natch) who sets the plot in motion for ill-defined reasons.

Let’s face it: today’s kids don’t want Space Jam: A New Legacy — they didn’t grow up with the Looney Tunes in general, much less the first film. No, like many a kid-oriented studio film these days, this one’s aimed squarely at credulous parents who saw the first Space Jam when they were a kid and are eager to show it to their own children. This way, they can at least coast on their own nostalgia while their brats stay quiet for an extended period of time. (That’s the only reason I can grok for A New Legacy‘s punishing two-hour runtime.) After all, I highly doubt that kids are going to point and grin in recognition at the droogs from A Clockwork Orange or the horny nuns from Ken Russell’s The Devils. Those colors don’t run.

It’s honestly difficult to pick apart the differences between each Space Jam — budget and scope excepted, they’re very much the same film with the same structure and the same perverse appeal. But in flying (or rather, believing you can fly) too close to the sun with its overstuffed sequel, Warner Bros. managed to do the impossible: make the first Space Jam feel downright simple, quaint, and comparatively appealing.

Sunrise, Sunset, or Midnight: Debating the Best Film in Richard Linklater's Before Trilogy

Who Was the Greatest James Bond of Them All?