The Pitch: Grizzled, aged truffle hunter Robin (Nicolas Cage) lives a simple life in the wilds of Oregon: he exists in solitude, with no electricity, no showers, and no ambition outside of his prized truffle pig, with whom he hunts and sells the prized fungi to well-dressed Portland restaurant suppliers for a hefty price. But when his porcine pal is heartlessly stolen from him one day, he solicits the help of his snooty young buyer Amir (Alex Wolff) to take him to Portland and track the pignapper’s whereabouts.

You Have No Value. You Don’t Even Exist Anymore: The above logline, along with Cage’s casting (and producing), sounds at first glance like some kind of shitty, low-rent Taken riff, a warmed-over DTV actioner destined to fill Redboxes ’till time immemorial. And for those who want to trust that Pig is, as I’ll explain, one of the best movies of the past few years (and maybe Cage’s career in the last few decades), without further explanation, I’ll ask that you stop reading this review and go in as cold as possible. But believe me when I say that Pig absolutely took me by surprise, and — if your heart is open, and your palate refined enough — it will for you, too.

The baby of writer/director Michael Sarnoski (making his feature directorial debut after the short-lived TV series Fight Night Legacy and Olympia), Pig soaks you in the same kind of moodily-lit culinary lyricism as Kelly Reichardt’s First Cow. He splits each of the film’s expertly-paced ninety minutes into three parts, but they may as well be courses: each “part” is prefaced by text indicating the food that we’ll be seeing (Mom’s French Toast, Wild Mushroom Tart).

Pat Scola’s cinematography soaks us in overcast Pacific Northwestern gloom, whether we’re in the dense foliage of Robin’s encampment or the cloud-covered streets and restaurants of Portland. Alexis Grapsas and Philip Klein’s sparse, folk-infused score aids the innate mournfulness of Sarnoski’s camera: even in its occasional lighter moments, Pig is suffused with the smoky air of tragedy. 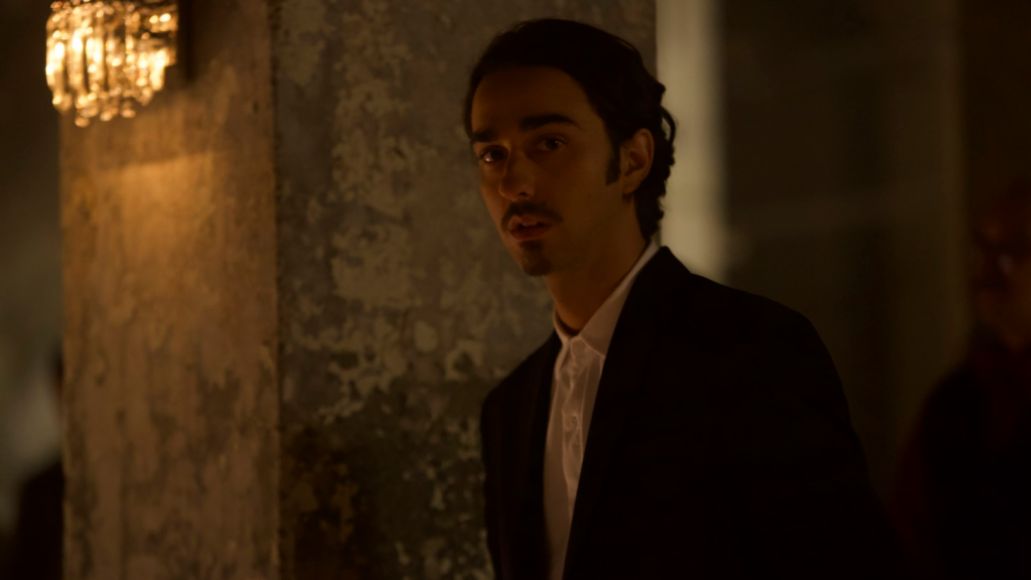 And that’s what Pig slowly but surely instills in you, its first act slightly teasing the kind of ball-busting revenge picture you expect before giving way to something more melancholy and existential. Just when you think the film is going to go the way you think (read: underground top-chef fight clubs), a bloodied, beaten Robin sits quietly with a shocked Amir and some of his underwhelming homemade French toast, the two commiserating about what shadows they’re both running from.

For Robin, it’s the loss of his wife, whose memory is only alive in the form of cassette tapes he listens to ad nauseam; for Amir, it’s the pressure of a rich, cold, restaurant-supplier father who won’t let him enter the family business, forcing him to go off on his own to seek his approval. The two men, previously bonded by convenience and commerce, now start to understand each other in ways they couldn’t imagine otherwise.

Suddenly, that’s what the film is capital-A About: Sarnoski using the guise of a stolen-pig picture to explore the ways we shape our sense of meaning in a meaningless world. For some, it’s the trappings of class: Gucci belts, fancy cars, the antiseptic pretension of Michelin-star gastronomy. For others, it’s the honor of a dish well-cooked, the emotions it brings out in the eater, the ways we give of ourselves so that others might find happiness. And naturally, the needs of the former inevitably require exploitation of the latter, economic considerations overwhelming our obligations to others, even ourselves.

Our respective hurts ripple out onto others, who either withdraw from the world or pass it on to someone else. Characters frequently remind Robin that he “doesn’t exist,” made more remarkable given the glimmers of history Sarnoski peels back about Robin as the film progresses. Who are we, if not the things we create? And if we stop doing those things, are we still us? The ways Pig explores those issues within such an easily exploitable premise is just one aspect of its unexpected genius.

We Don’t Get A Lot of Things to Really Care About: Much like Pig subverts your expectations of it, so does Cage, ironically serving less ham here than he has in a solid couple of decades. Don’t get me wrong, the Meme of Cage Rage has always existed in tandem with somber, more layered Cage, a man who’s long since earned his status as one of the greatest actors of his generation. But Sarnoski puts the brakes on Cage, denying us what we expect of a pig-revenge story starring the man, instead letting him lean into the actor’s late-fifties realities.

In most of his recent flicks, Cage is de-aged, wearing a moppy wig and feigning youth to increasingly feeble results: Pig decks him out in long johns, a scraggly beard, and a pot belly, both actor and filmmaker leaning into Cage’s true years. He’s a man of quiet intensity rather than bug-eyed mania, which makes his determination all the more impressive (and his vulnerability hit all the more acutely). 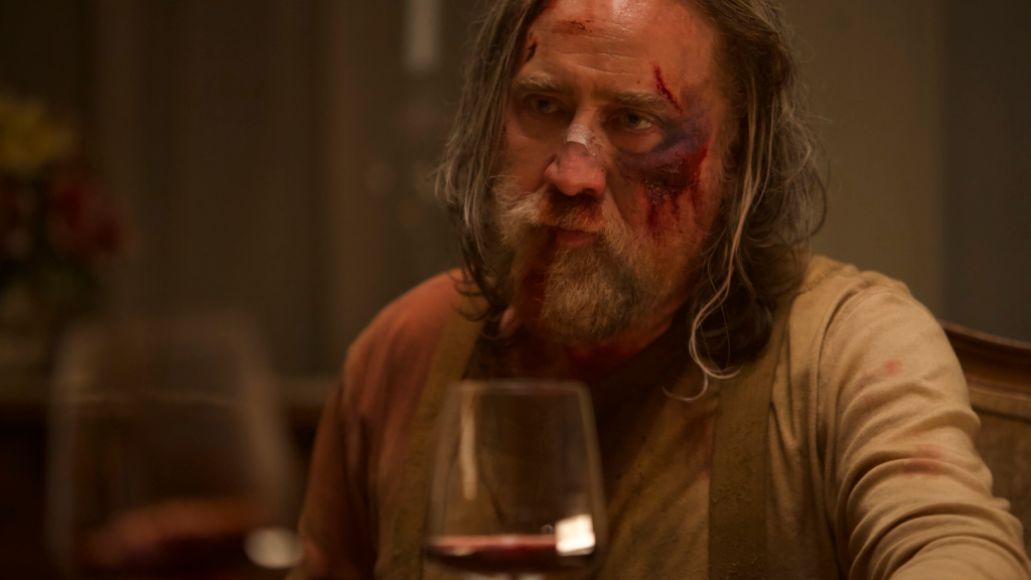 Don’t get it twisted: this is not Nic Cage in Action Mode, but the kind of Cage we could have had this whole time if The Rock and Face/Off hadn’t derailed him into thinking he was an action star for decades. This is the Cage who won an Oscar for Leaving Las Vegas, who dug his way into our cerebellum with Raising Arizona and Vampire’s Kiss. There’s a place for Cage Rage, but it’s not here, and its absence paradoxically makes Pig all the more entrancing. (That this film comes out the same year as the abysmal Willy’s Wonderland makes for the most stunning of contrasts for an actor whose highs are as remarkable as his lows.)

It helps that he’s paired so adroitly with Wolff, who perfectly calibrates between Amir’s surface douchiness and the wounded tragedy that drives it; the same goes for Adam Arkin, who steals the show with two pivotal scenes near the film’s end, a masterclass in menace giving way to the agony of reopened emotional wounds. Everyone gets stellar material to work with here, and Sarnoski’s subtle approach brings out unexpected flavors in everyone.

The Verdict: In one of Pig‘s most delectable heartbreaking scenes halfway through the film, a bloodied Robin dresses down a pretentious restaurateur who used to work for him, one who gave up his dreams of a neat little gastropub in favor of cold, deconstructionist haute cuisine he’s not passionate about making. “None of it is real. The critics aren’t real. The customers aren’t real,” he says. All that matters is your passion, and following it no matter the demands of the market, or others, or external stakeholders who couldn’t give a damn about you.

It’s a mantra Cage might as well be telling himself: Pig, along with later career stunners like Mandy and Color Out of Space, feel like a Cage who’s slummed it in sophomoric action dreck for decades reawakening to his true purpose. But even outside of his revelatory, reigned-in performance, Sarnoski’s debut is a scintillating tone poem about the inextricable links between love, creativity, and commerce, and what happens when the latter encroaches too much upon the former.

Where’s It Playing? NEON serves up Pig with a subtle reduction of Cage and a well-balanced deconstruction of the revenge film in theaters on July 16th.