The Pitch: Josh (Keegan-Michael Key) and Melissa (Cecily Strong) have hit a roadblock in their relationship: he’s too aloof, she’s too controlling, and the pair are steamrolling towards an abrupt end. But on a last-ditch backpacking trip to rediscover their bliss, they stumble upon something stranger: A mysterious, brightly-lit town called Schmigadoon, where everything looks like a colorblind-cast version of a ’40s villa and the townspeople burst into song at the drop of a straw hat. Soon, they discover that they’re trapped in the cloyingly musical town until they can find “true love” — love that it seems they don’t have anymore (if they ever did). Will the two patch up and get out? Or will they have to find a way to adjust to this new, toe-tapping normal?

Corn Puddin’, Corn Puddin’, Corn Puddin’! The musical comedy has had a long, difficult road on television — for every Crazy Ex-Girlfriend, there’s a Cop Rock, after all. Galavant and Zoey’s Extraordinary Playlist enjoyed passionate cult followings before being cut off at the knees far too soon. That may be why Schmigadoon! feels so much like a one-off experiment; by and large, it’s a self-contained, six-episode story that’s committed to not wearing out its welcome. That fleet-footedness, like the fly-by-night town of Brigadoon from which the show gets its basic name and concept, is both its greatest strength and greatest weakness. It doesn’t want to waste your time, but it also leaves you feeling a bit short-changed.

At its core, Schmigadoon! wants to be a show about the complexities of modern relationships, how the hustle and bustle and complexity of the modern world clashes with the simple, uncomplicated positivity of film and theater’s (and, by extension, America’s) Golden Age in the 1940s. Before they enter Schmigadoon, Josh and Melissa are two well-off doctors years into a stagnant relationship, deeply aware of the other’s flaws while being unwilling to change themselves. Each of the series’ episodes flashes us back to a moment “before Schmigadoon,” reminding us of their rough spots — a constant, if slightly repetitive, reminder that their relationship woes existed before they entered Schmigadoon. 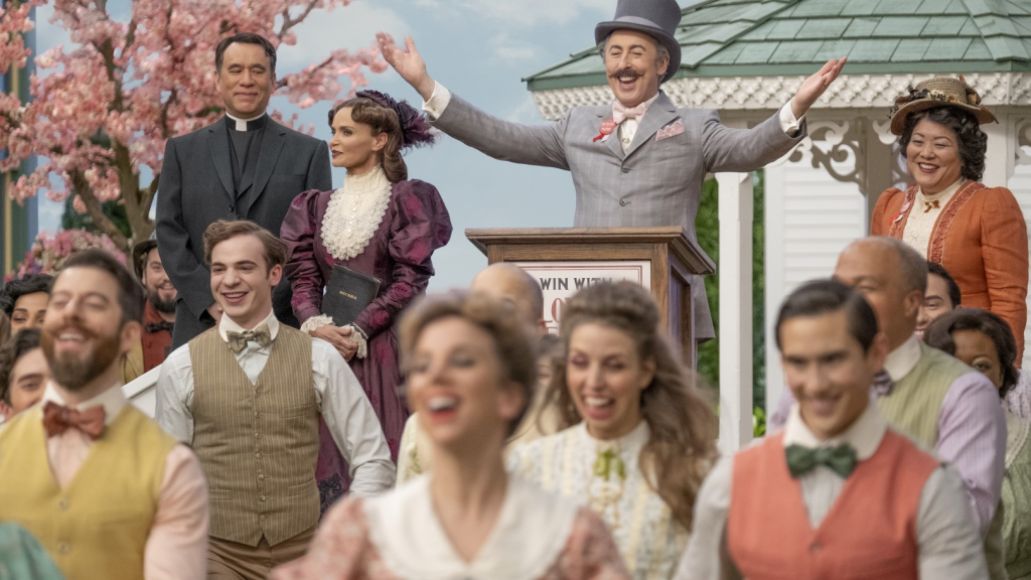 Contrast that with the titular town, an unholy blend of The Music Man, Carousel, Sound of Music, and Oklahoma!, replete with colorful musical characters dead set on irritating Josh (who hates musicals) and delighting Melissa (who loves them). It’s a place overseen by the oh-so-effete Mayor Menlove (Alan Cumming) — three guesses as to his big secret — but secretly ruled by the judgmental biddies of the Women Against the Future, led by preacher’s wife Mildred Layton (Kristin Chenoweth). There are flat cap-wearing bad boys (Aaron Tveit’s rakish Danny Bailey), waifish, ambiguously-aged waitresses (Dove Cameron’s Betsy McDonough), and sprightly, lisp-sporting newsies (Liam Quiring-Nkindi) who pop into frame to announce any and every character’s entrance.

Schmigadoon! spends most of its time using Josh and Melissa as vehicles for wry commentary on the old-fashioned tropes of old-school musicals, but it’s a bit frustrating that the show doesn’t do more with them. Key and Strong excel both in and out of their musical setting, though Key is saddled with the straight-man role for far too much of the show’s runtime. I know it’s his role as a character to be closed off and scornful of musicals, but it seems a shame to waste talents that The Prom and Jingle Jangle have proven he has.

Still, it’s Strong’s show all the way through, and she takes nicely to the musical numbers and jaundiced musical commentary alike (even if most of the jokes amount to pointing out when a reprise is starting, or the fact that no one — no one — likes dream ballets). But they spend so much of the later episodes of the show apart, each pursuing potential avenues for “true love” in Schmigadoon so they can escape, that it’s hard to get a read on them as a couple either before or during their adventure.

Still, they’re capably aided by the supporting cast, a veritable who’s-who of musical theater vets who preen their way through number after number like they’ve been doing it for a thousand years. Cumming is a joy as the welcoming mayor, Tveit’s aging-bad-boy routine is full of smarmy bluster, and Chenoweth delights with her shrieking villain. Ariana DeBose and Jaime Camil are saddled with the duller work of being romantic foils for Josh and Melissa, but boy howdy can DeBose carry a number. The stageyness of the more musically experienced cast clashes believably against Key and Strong, who often find themselves naturalistically swept up in Christopher Gattelli’s playful choreography with little to do but go with the flow. 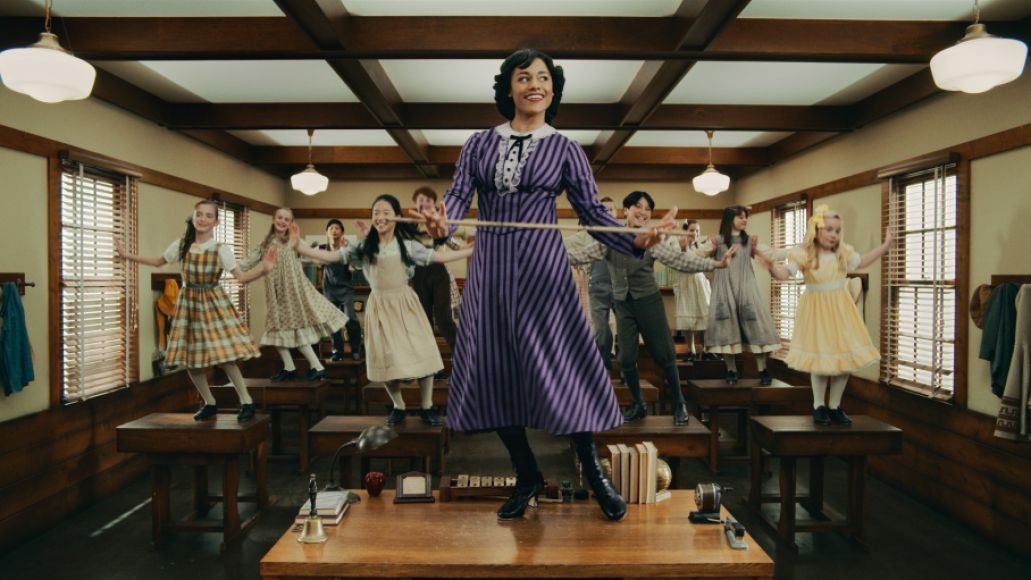 Pushing Ditties: Of course, any good musical parody has to be a good musical in its own right, and Schmigadoon! does…. fine in that department. The songs come courtesy of series co-creator Cinco Paul (who, along with longtime writing partner Ken Daurio, wrote the Despicable Me series), and they’re capable enough as rousing homages to the musicals of old, even as few stick with you after you finish watching them. There’s a great number in episode two about the town’s love of “corn puddin'” (an adoration that grows increasingly absurd and borderline pornographic), and the title track in the premiere is a nifty blast of musical mayhem for our dog-eared protagonists. But unless a song is more explicitly cribbing from an established standard (riffs on “Do-Re-Mi” and “Trouble in River City” are to be expected), the songs of Schmigadoon! blend together after a while.

What helps, admittedly, is Barry Sonnenfeld’s commitment to the bit, bringing with him the kind of offbeat visual whimsy he parlayed in Pushing Daisies and A Series of Unfortunate Events. In his hands, Schmigadoon looks appropriately stagey and vibrant, leaning into the kind of proscenium framing you’d expect of a filmed stage production — which serves to heighten the unreality of the town. Get ready for lots of ambitious long-take musical numbers, and one gasp-inducing split-screen-that-ain’t near the end of one episode. There’s always a sense of storybook charm to his visual eye, and that works in Schmigadoon‘s favor.

The Verdict: Despite its hiccups (and the thinness of even its non-musical characters), there’s a lot to like about Schmigadoon! Musical theater nerds get to see perennial favorites like Chenoweth and Tveit camp it up in delightfully stagey numbers, and the show seems a pleasant showcase for Strong’s musical and dramatic chops. If the show gets a second season, though, here’s hoping they up their song game, give some of the more under-served characters their moment in the sun (especially Fred Armisen and Ann Harada), and keeps its giddy energy.

Where’s It Playing? Schmigadoon! comes sweeping down the plains and onto Apple TV+ July 16 with two episodes, with new episodes every Friday.