The Pitch: Officially, they’re known as Task Force X, the reluctant team of dispensable, imprisoned supervillains roped into service by the unscrupulous Amanda Waller (Viola Davis) to do the jobs no one else will take in exchange for time off their sentence. But unofficially, they’re known as The Suicide Squad — mostly because the members’ list has a higher turnaround than a suburban Wendy’s. (Plus, if you disobey, Waller can just detonate the bomb she’s planted in your brainpan.)

This time around, the latest assemblage of the Squad has its most dangerous mission yet ahead of them: infiltrate the hostile Central American country of Corto Maltese and destroy a mysterious weapon of mass destruction known as Project Starfish. But as one thing after another goes horribly wrong, and the roster gets smaller and smaller, the remaining squaddies learn there’s a lot more to Starfish than they thought — and that the fact of the world may well depend on them shutting the hell up and stepping up to the plate.

Get Your Gunn: It’s amazing to recall the bizarre set of circumstances that brought James Gunn into the DC universe, and this story in particular. As you’ll recall, Gunn was semi-canceled several years ago by a weaponized far-right misinformation campaign, the kind that pretended that off-color jokes on Twitter about pedophilia made you a pedophile, instead of just an asshole who probably needed to keep his mouth shut. That faux-outrage got him fired from the third Guardians film, but fittingly opened him up to take on The Suicide Squad (and of course, once the dust cleared and Disney came to its senses, it brought Gunn back on for Guardians Vol. 3). So it almost pains me to say this, but… thanks, Jack Posobiec?

Fittingly, The Suicide Squad seems to fit the same trajectory Gunn traveled as a person: Someone with a background in sick, pitch-black comedy (he came up as a filmmaker working on Troma films with Lloyd Kaufman) who, upon age and reflection, softened into someone with no small amount of sentiment. That attitude permeates this film, one which (apart from a few recurring characters) practically ignores the dark, shaggy David Ayer-directed film from 2016. The problem with that film was that it tried too transparently to be DC’s answer to Guardians of the Galaxy; now, they’ve just cut out the middleman, and the results are much more assured as a result. 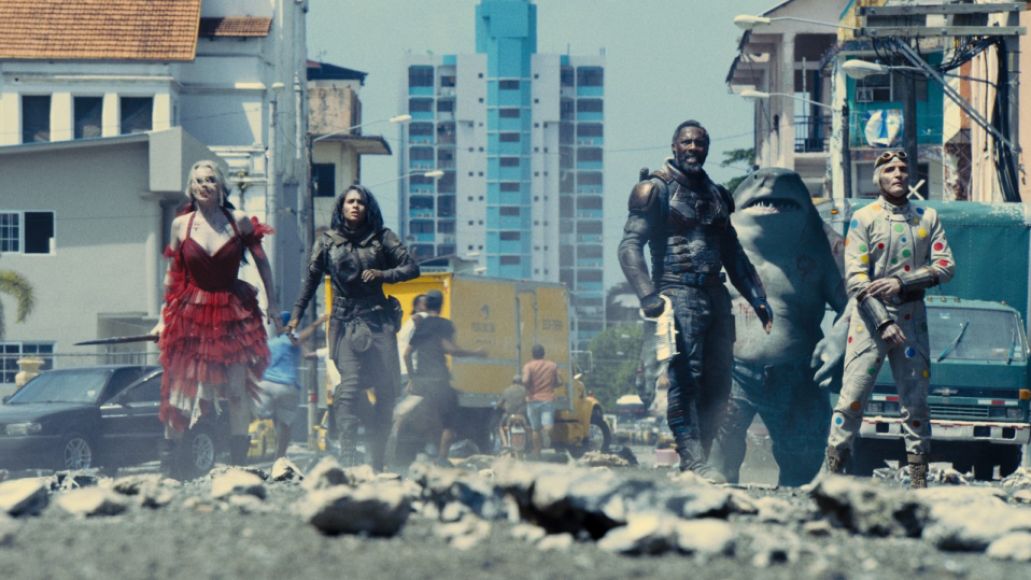 Taking heavy inspiration from the war films of the 1970s (the original Inglorious Bastards, The Dirty Dozen) with a heaping helping of The A-Team thrown in, The Suicide Squad wastes no time throwing the viewer into the muck with its clown car of characters in an uproarious bait-and-switch opener involving the Squad’s initial storm into Corto Maltese. There’s the return of buttoned-down commander Rick Flag (Joel Kinnaman) of course, as well as agent of chaos Harley Quinn (Margot Robbie) and Captain Boomerang (Jai Courtney).

But they’re joined by a rogue’s gallery of increasingly goofy compatriots, including cameos from Gunn regulars Michael Rooker and Nathan Fillion, among others. Fittingly to their name, most of the team doesn’t last very long, and before the dust has settled we’re following another Suicide Squad, practically stepping over the bodies of their forebears to get the real job done.

#SquadGoals: Out of the chaos, a few members of the Squad get the spotlight. There’s Bloodsport (Idris Elba), a curmudgeonly assassin with a suit full of custom weapons and a daughter (Storm Reid) he’s neglected for too long; Peacemaker (John Cena), an America-loving murder machine who acts like Captain America’s raging id let loose; Ratcatcher 2 (Daniela Melchior), who inherited the technology to control rats from her supervillain dad; King Shark (voiced by Sly Stallone), an ancient murderbeast who, ironically, has no chums; and Polka Dot Man (David Dastmalchian), with mommy issues as destructive as the interdimensional polka dots he can wield as terrible weapons. Meanwhile, Flag and Harley have their own problems to solve.

It’s a good thing Gunn knows how to wrangle ensembles of over-the-top characters, because The Suicide Squad would collapse under its own weight in anyone else’s hands. Put any two of the remaining Squad together, and they’ve got deceptively compatible (or conflicting) character trajectories. Bloodsport and Rick Flag? Old military buds and colleagues. Bloodsport and Peacemaker? Two posturing alphas getting on each other’s nerves. Ratcatcher proves the team’s beating heart; when she’s not dozing off like a sleepy millennial, she provides Bloodsport with a daughter figure he can look after and King Shark with a friend who can provide a long-overdue sense of connection.

The real star, as always, remains Harley Quinn. Robbie knows every squeak and nuance of this role like the back of her hand, stealing the show even as the character herself slides back into an ensemble player after her star turn in Birds of Prey. The middle act sends her off on her own little adventure, held captive in a whirlwind romance with Corto Maltese’s devilishly handsome dictator (Juna Diego Botto), which wraps in a way that’s both surprising and, upon further reflection, deeply reflective of Harley’s compulsion to be a fly in the ointment. Robbie’s as deft a comic actress as she is an action star, and she calibrates Harley’s wild-eyed unpredictability with expert precision. The rest of the ensemble is just as fun, but The Suicide Squad remains firmly The Harley Quinn Show. 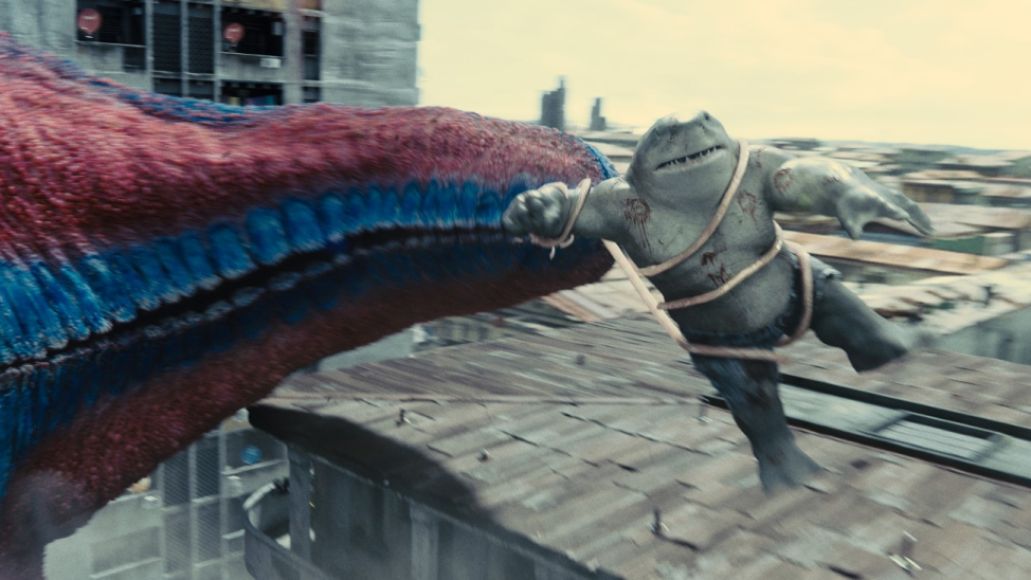 The Corto Maltese Falcon: While Gunn’s characters work, and the giddy inventiveness of the premise holds so much fun, the broader Corto Maltese backdrop suffers a lot by comparison. Apart from Peter Capaldi as the pragmatic mad scientist The Thinker (stealing his too-few scenes with an energy that combines The Doctor’s idiosyncracies with Malcolm Tucker’s mouth), the “war-torn Latin American dictatorship” doesn’t get much of a chance to establish itself as a distinct place. There’s the push and pull between Botto’s fresh-faced pragmatist and an older, war-hungry general (Joaquin Cosio), not to mention a revolutionary group led by a thankless Alice Braga. But they suffer mightily in comparison to the weird, off-kilter antiheroes Gunn pits them against.

Occasionally, Gunn’s love of excess threatens to undo the film’s sense of momentum; its visual inventiveness loses some steam in the latter half, especially in a concrete-and-ash coated finale blissfully punctuated with the neon-bright intervention of a luminescent interstellar starfish. Thankfully, Gunn keeps throwing enough inventive kills and comic-book antics at us (aided by the wildly disparate skills sets of our antiheroes) to keep the R-rated mayhem from getting too repetitive. There are even some digs at American intervention in foreign countries that feel relatively radical for a big-budget superhero movie, and they even drive some important wedges in the team dynamic.

The Verdict: Gunn seems enamored of misfits and the way even the lowliest of creatures can find purpose and meaning in each other. That ethos shines through in the Guardians films, and it does the same here too (albeit with more shredded bodies and, yes, full frontal male nudity). The Suicide Squad is probably the closest we’ll get to a big-budget Troma film released by a major studio, and it’s high time we treasured it, warts and all.

Where’s It Playing? The Suicide Squad dumps you on a beach with a bomb in your brain and prays for the best in theaters (and HBO Max) August 6th.