Anthrax are topping off their 40th anniversary celebration with the new Anthrax XL signature whiskey. The band has also low-key announced a 2022 US tour.

The thrash legends teamed with Hillrock Estate Distillery for the new Solera-aged, single-barrel bourbon. The mash was aged for 40 days in a 20-year-old Oloroso Sherry cask, adding to the complex flavors.

Anthrax’s Scott Ian and Frank Bello were among the first to taste the signature whiskey, traveling to Distillery for a series of tastings to find a bourbon worthy of the “Anthrax XL” name.

“I sampled eight different whiskeys from Hillrock’s rickhouse when I was there to pick one for our 40th-anniversary bottle,” Ian said. “It’s a difficult task in that they’re all so great, thieved from the barrel and into my glass. Every time I’ve had to choose a whiskey, I wait for the juice to tell me that, ‘it’s the one.’ This barrel spoke up loud and clear. On the nose, there is an explosion of caramel, toffee, and butterscotch with hints of dried cherries and fresh herbs. The palette has a rich texture of bright red fruits, baking spices, and toasted almonds. I’m drooling just reading that back. Get yourself a bottle, you deserve it!”

Added Bello: “I’m very, very happy with our ‘Anthrax XL’ whiskey. It’s smooth, has a great aftertaste, and creates a great vibe. Right after my first taste, I wanted more.”

As Ian said, only one barrel was chosen, yielding 400 hand-numbered bottles at 115 proof (SRP $155 USD). In addition, 40-limited edition numbered will be available, priced at $350.

The limited editions include a black velvet drawstring bag and a “Golden Ticket” granting the purchaser (and a plus-1) admission to an upcoming Anthrax headlining concert in the purchaser’s area. This also includes a personal meet-and-greet with the band, to take place during Anthrax’s 2022 US tour — the first official mention of the tour.

“This ‘Anthrax XL’ anniversary cask is the band’s fourth Hillrock Solera-Aged Bourbon selection,” Hillrock’s owners said in a joint statement. “Over that time, we have become very close with Scott and have enjoyed getting to know all of the other band members, either up here with us in person or virtually. We hope to have Scott and Frank, as well as Charlie [Benante], Joey [Belladonna], and Jon [Donias] all up here together soon to taste, create and finish more beautiful craft whiskey together for many more years.”

Purchase a bottle of “Anthrax XL” via 120 West 58 Street Wine & Liquor. See a close up of the bottle design below. 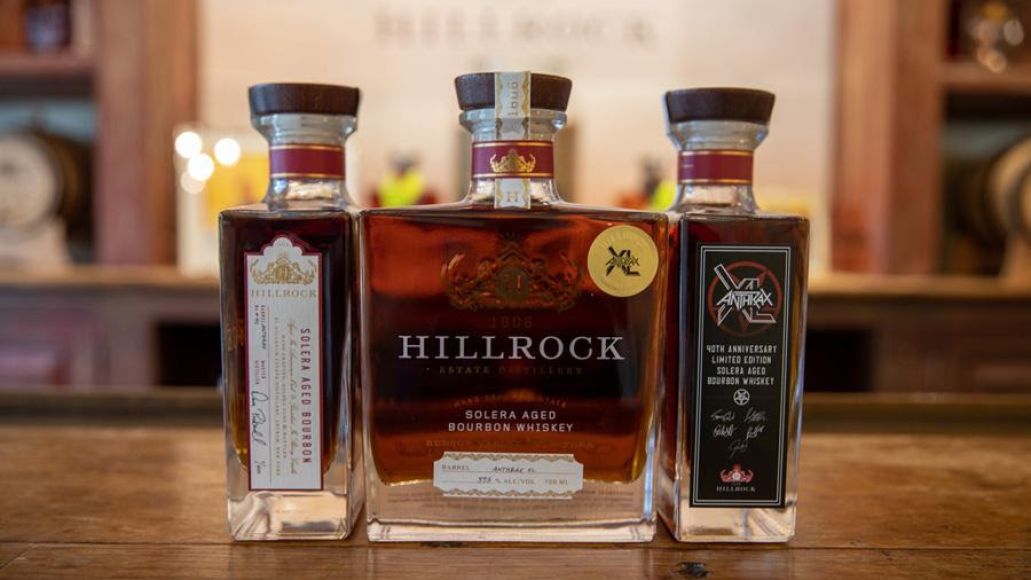