Netflix has shared the first images from its upcoming live-action adaptation of Cowboy Bebop. Additionally, the streamer has confirmed a November 19th premiere for the series.

Based on the beloved space Western anime, Netflix’s Cowboy Bebop stars John Cho as Spike Spiegel, Mustafa Shakir as Jet Black, and Daniella Pineda as Faye Valentine, who together hunt down the solar system’s most dangerous criminals — for a price. Check out images of all three characters in action down below.

Shinichirō Watanabe, the director of the original Cowboy Bebop anime, serves as a consultant on the new series, while original composer Yoko Kanno is providing the score. André Nemec leads the series as showrunner in addition to executive producer.

The premiere of Cowboy Bebop on Netflix coincides with the 20th anniversary of the original anime series broadcasting on Adult Swim in 2001. 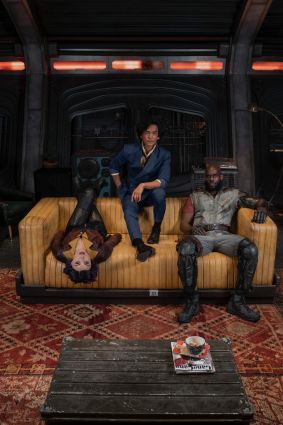