Cradle of Filth have announced a fall 2021 North American outing, dubbed the “Lustmord and Tourgasm” tour. During the run, the UK extreme metal band will perform the 1998 concept album Cruelty and the Beast in its entirety, as well as a “lengthy encore of hits.”

3Teeth and Once Human will provide support for the 20-show tour. It kicks off on October 1st in Dallas and runs through an October 26th date in San Francisco. Cradle of Filth then heads to the Monterey Metal Festival in Monterey, Mexico, for a performance on October 29th.

“It’s been far too long America, but soon we will return to haunt your shores again,” frontman Dani Filth said in a press release. “We, as a band, are very much looking forward to coming back to the States and performing Cruelty and the Beast in its entirety (plus some firm fan favorites), which was our earlier intention before the pandemic reared its ugly head.”

Dani added: “To say we’re very excited about this, plus the support of 3Teeth and Once Human, is an overwhelming understatement!”

Cruelty and the Beast was a seminal record for the English extreme metallers. Its narrative is based on the legend of the Hungarian “blood countess” Elizabeth Báthory, who was known torture and execute young females under the superstition that their blood would extend her youth and beauty. The countess is listed in the Guinness Book of World Records as the most prolific female killer in history.

Cradle of Filth are also set to release a new album, Existence Is Futile, on October 22nd. The band recently detailed the upcoming LP and offered up the brutal lead single, “Crawling King Chaos.”

See the band’s full list of 2021 North American tour dates and the poster below. Get tickets via Ticketmaster. 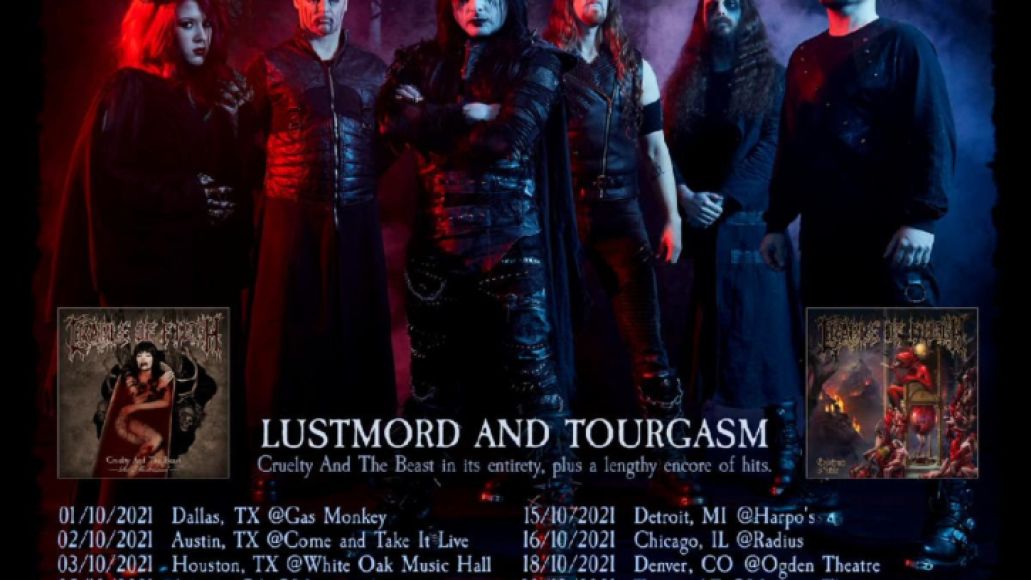