In the fall of 1970, nearly eight years before Dhani Harrison was born, his father George released the seminal All Things Must Pass. The former Beatle’s third solo album would be deemed a masterpiece almost instantly, and 50 years later, it still has more to say.

At the helm of a special anniversary Super Deluxe reissue project — where the triple album has been expanded into 8 LPs, with 47 demos and outtakes — is Dhani, who went “digging through mountains of tapes” to create the best version possible of his dad’s most commemorated album, down to the very last detail. From the design of the literal box, to the iconic cover, to using new technologies to create the sound George would have wanted, the younger Harrison took the time and care to oversee the process to “showcase how great [the] project was,” as he puts it.

The box set, out today, August 6th, is available in three versions and includes a ton of extras that will deeply satisfy even the biggest of George Harrison fans. Particularly exciting is the extremely limited Uber Deluxe version, which comes in a box that was built from the wood of a fallen oak tree at his home, absolutely full of behind-the-scenes materials. Furthermore, some of the versions feature scrapbooks curated by George Harrison’s wife and Dhani’s mother, Olivia.

The ambitious project first needed its guide to come of age; it wasn’t until the mid-to-late ‘90s that Dhani Harrison took the deep dive into his father’s work for the first time. “When I was a kid, it was like Traveling Wilburys, Cloud Nine, Gone Troppo, you know what I mean?” he tells Consequence by phone. “That was the era we were in — the ‘80s and ‘90s.”

He spent more time listening to his father’s supergroup with Tom Petty, Bob Dylan, Jeff Lynne, and Roy Orbison than he did listening to the LP he would later remaster and reissue. Around 1997, that all changed. “I went to kind of the beginning of my dad’s career and started listening from there,” he says. Despite his father’s illustrious career, both solo and with The Beatles, All Things Must Pass has “always” been Harrison’s favorite. For him, the album is as personal as it can get: “For me, it’s as if that whole album is about my home. And my garden. And my dad and his friends.”

The unmistakable album cover (which pop singer Lorde recently declared is the greatest one ever) was photographed at Friar Park, the vast property and home George Harrison purchased in Henley-on-Thames, England in early 1970. It’s the house where Dhani grew up, and it’s what inspired the All Things Must Pass song “The Ballad of Frankie Crisp.”

Frankie Crisp was a real person: Sir Frank Crisp owned the property for a few decades during the turn of the 20th century. On the LP cover, Harrison’s father, wise beyond his years in his late 20s, sits contentedly in the midst of a group of gnomes, which still exist today. In fact, Harrison sees the gnomes all the time. “They’re my friends,” he jokes. “I was with them yesterday. You know, they live in [a] part of the house. Sometimes we have lunch. But you know, they’ve been around for 100, 130 years.” (The gnomes have a special home in the Uber Deluxe version of the box set — they’ve been 3D printed as keepsakes. Because you can’t keep them separated, a figurine of George is included, too.)

As for the friends Harrison is referring to, that would be all of the fellow musicians who played on the album, including Ringo Starr, Eric Clapton and the band that would eventually become Derek and the Dominoes, Billy Preston, and Peter Frampton. There’s also pedal steel guitar player Pete Drake, who lent his talents to tracks like “Behind That Locked Door” and “Ballad of Sir Frankie Crisp (Let It Roll),” giving the LP an “almost Nashville-y” sound that Harrison is particularly fond of. “I always loved the album Oh Mercy by Bob Dylan, and Pete Drake played on that,” he says. “It’s almost a country record… If you wrote [All Things Must Pass] in Nashville this year, it would make sense.”

For the 50th anniversary edition, Harrison and three time-GRAMMY Award winner Paul Hicks painstakingly left no stone unturned as they remastered the set. “When we remodeled it in 2001, it was remastered from the master tape, the actual master,” Harrison says. “When we did it this time, we took everything back to the original multis and went as far back… as far, far, far, far back into separation of instruments as possible. [It’s] an entirely different process that’s like opening Pandora’s box, you know, because you’re going back to the original to recreate the original mixes.”

Separating and dissecting worked out, because now, according to Harrison, the message of the album is more apparent than it’s ever been. “It’s funny that the messaging of this record was almost so strong, but you couldn’t hear the message clear enough, I guess, in his vocals,” he explains. “When you hear it now, it’s like we’re ready to receive it.”

Harrison says his father would be happy with the clarity in the sound of the anniversary edition. “I think he really would have enjoyed the small amount that we can pull off the reverb of vocals without changing what the fans would know as being the sound of the record,” he notes.

As far as what “extra” the elder Harrison would enjoy the most? “He’d love the gnomes,” says Dhani. ”I did that for him. Because, you know, we have to have a sense of humor about all of this and my dad loves having a good joke.”

Despite living and breathing All Things Must Pass in preparation for the super deluxe edition, Harrison hasn’t grown tired of the album. “Everyone keeps asking me if I’m sick of it,” he jokes. Due to the pandemic, he’s been unable to return home to Los Angeles. “I’ve been stuck out in England, just dying to put this on on my record player in LA.”

“I’m going to have to buy a new record player, I think,” Harrison adds. “We’ve been out here so long now… but you know, it’s good, because this is where the record originated. And you know, I’m in the garden where the gnomes live.” 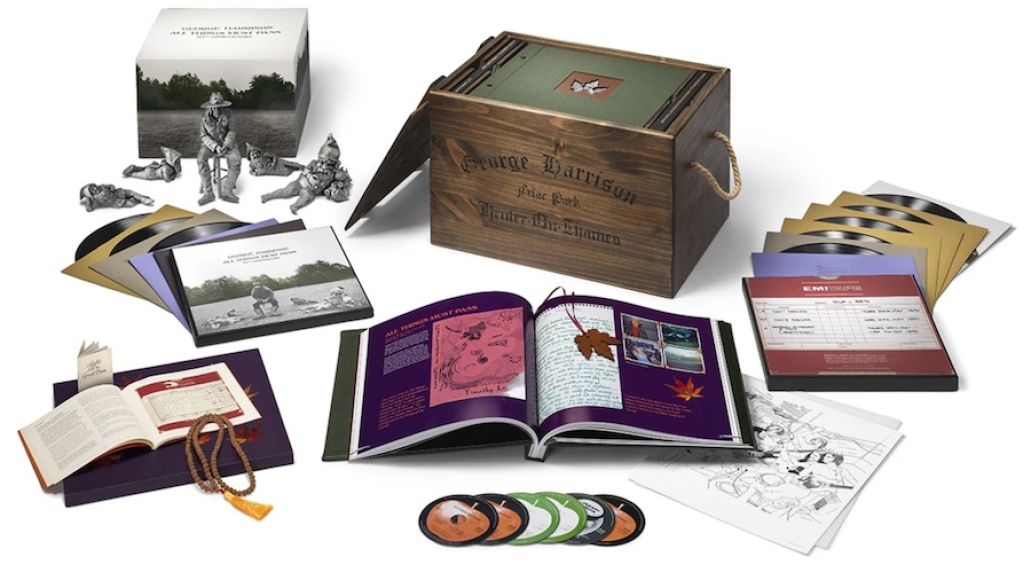