Nothing is off the table for Indigo De Souza. In the music video for “Kill Me” — the lead single from her stunning new album, Any Shape You Take — the North Carolina singer-songwriter indulges in a fetish known as cake sitting, in which the participant sits in (you guessed it) an otherwise-perfect cake. “It feels amazing,” De Souza tells Consequence from her home just outside Asheville. “Your whole life, you grow up going to birthday parties and baby showers and weddings, and everybody always has these perfect cakes that they daintily cut into.”

For those who didn’t immediately leap on the De Souza bandwagon after her under-the-radar debut, 2018’s I Love My Mom, “Kill Me” is a bold introduction: “No one asked me to feel this fucked up, but here I am fucked up,” she croons over a garage-pop riff. But the track and its icing-filled video summarize the typical tenets of De Souza’s music, which is whimsical, gruesome, and sexy — often all at once.

On Any Shape You Take, De Souza’s first release for Saddle Creek, she builds off the lo-fi jangle of I Love My Mom in pursuit of a wider array of subgenres. Tracks like the grungy “Way Out” evoke straightforward ‘90s indie rock, while opener “17” is an AutoTuned-soaked master class in synth pop. But whichever mode she operates in, Any Shape You Take feels authentically De Souza, with each track trademarked by her unguarded lyrics.

To celebrate today’s (August 27th) release of Any Shape You Take, Consequence talked to De Souza about everything that went into the making of the record.

Can you tell me a bit about the timeline of Any Shape You Take?

So this album spans over about six years. It’s a hodgepodge of old songs that are from the I Love My Mom era, and then also some new songs that are more recent. I think the newest one is “Pretty Pictures,” and that was a last-minute addition. I felt like a lot of the songs that had been sitting around for a while deserved their time to be heard before, so I could better move on from that era of my life. I think that the next thing I put out will be a better representation of where my writing has been going recently.

How does it feel to have these songs that are years old see the light of day?

It feels right. I honor all the iterations that I take in my life, so it feels really good to be able to express past feelings, because I still relate to them.

You’ve talked a lot about how you’ve been a musician since you were a kid. What was it like growing up with that goal of making music for a living?

I had a sparkly idea of the future. Since a young age, I’ve battled mental illness in a real way, and I think that if I hadn’t had music to look forward to, and pour energy into, and express myself through, it would have just been a lot harder to process. It’s always been the grounding aspect of my life, and kind of like a best friend. Music is a space where I can connect with myself, and actually hear my thoughts and feelings and honor those things instead of ignoring them.

Your lyrics are obviously really unguarded and vulnerable. How do you see people typically respond to your songs?

I think my music gives people a space to process their own emotions and feel like they’re connecting to someone. It’s always been really special and the responses from people always feel really tender and personal. It makes me feel like I’m doing something right, so it’s like a symbiotic relationship.

Do you wear your heart on your sleeve in your personal life, too?

For sure — I’m a very open and connective person. I do have boundaries with people to keep myself safe from bad energy, though.

That checks out. Any Shape You Take feels a lot more sonically diverse than I Love My Mom — was that just a result of better recording equipment?

I Love My Mom was a living room recording, and the difference really is that things just kind of took off. I came into this world where I started working with many different people, then signed to Saddle Creek, and then gained so many more resources than I’d ever had in my life. I finally had all the tools to execute all my ideas. But I also think I’ve developed as an artist. When I made I Love My Mom, I had just started playing with a band, and it was very new to me to flesh out those songs into something more than just me and a guitar. And now I get to think about every instrument and what to do with the production of each song.

What were you listening to while making Any Shape You Take?

I don’t really listen to a lot of music. I do sometimes, but especially when I’m making an album, I don’t like to be influenced. I’m just so obsessed with what I’m recording, and sitting with them, and thinking about what I’m going to do next. I’ve never pulled influences from other things actively while recording.

You’re not afraid to speak very directly at certain people in your songs. When you write, do you think more about other people or about yourself?

One of the coolest parts of the album is the screams on “Real Pain,” which you sourced from fans. How did it feel to sort through all those recordings?

I wanted to hear all of them. A lot of them came with paragraphs written about where the recording was coming from, or what the person was feeling when they created it, or what they were going through. It was heavy, but it felt good. I just like to take on other people’s emotions. It’s a human thing to do, and it feels good when I can do that or give someone space to scream.

How do you balance being a super empathetic person who absorbs others’ emotions, while also maintaining your own mental health?

I value alone time. If I’m around other people, then I will absolutely go out of my way just to be a vessel for whatever they’re feeling. It becomes really important to take time alone and rest and reflect by myself. It’s also important to have boundaries if someone is being overbearing towards your energy, or they’re taking too much for you. It’s good to have boundaries if someone isn’t able to give space to you as well.

I think “Pretty Pictures” is one of the most poignant songs on the album. When, if ever, do you think it’s OK to get back with an ex?

I don’t think there’s one answer for that. I think it would just vary depending on the situation. I think if it’s a healthy thing, I think it’s totally OK to morph in and out of people’s lives. Sometimes you feel romantic, and sometimes you don’t. And I think that’s OK.

Is there a song that you’re proudest of on Any Shape You Take?

Proud is a funny word. I’m proud of the whole album, so it feels funny to pick one out and hold it above the rest. But I really, really like “Real Pain.” I think just because of the recordings, it feels really special, and I’m excited for that kind of collective energy.

You also reference your mother a lot, and how she urged you to pursue music. Where do you think you’d be now if your mother hadn’t pushed you towards music?

Maybe at massage school. I like to do massage. Or maybe I’d be doing visual art — I used to make it so much more, and then I stopped because I became so busy with music that I felt like I had to put all my artistic energy towards music. In high school, I remember coming to this point where I was like, “I love making visual art so much. And I love making music so much. Which one should I pursue?” And then I just kind of realized that I was much better at music than I was at visual art.

That makes sense, because the “Kill Me” video feels very artistic.

I worked on that video with two really, really close friends of mine, Jordan [Alexander] and Emily [Costantino], and they came up with the concept for that video based on what I asked for, which was something messy and nihilistic and vibrant.

Why do you think people enjoy watching cake sitting?

What do you hope people take away from the album?

I hope it feels cathartic for them, and that they feel like they’ve been given space where it’s OK to feel a full spectrum of emotions. I hope they come away with a broad idea of love, and all the different kinds of love, and how they can better love people in their lives or love themselves. This album will always be about giving people a space to feel everything as big or small as they want.

Where do you find that space for yourself?

For me, it just comes from my community. I have a very beautiful friend group, and a lot of people around me that are just very accepting and non-judgmental. Also, dancing together has been really important. The feeling of celebrating our bodies and moving around and dressing up and doing each other’s makeup has been a really important way to feel like I’m allowed to express myself.

Any Shape You Take Artwork: 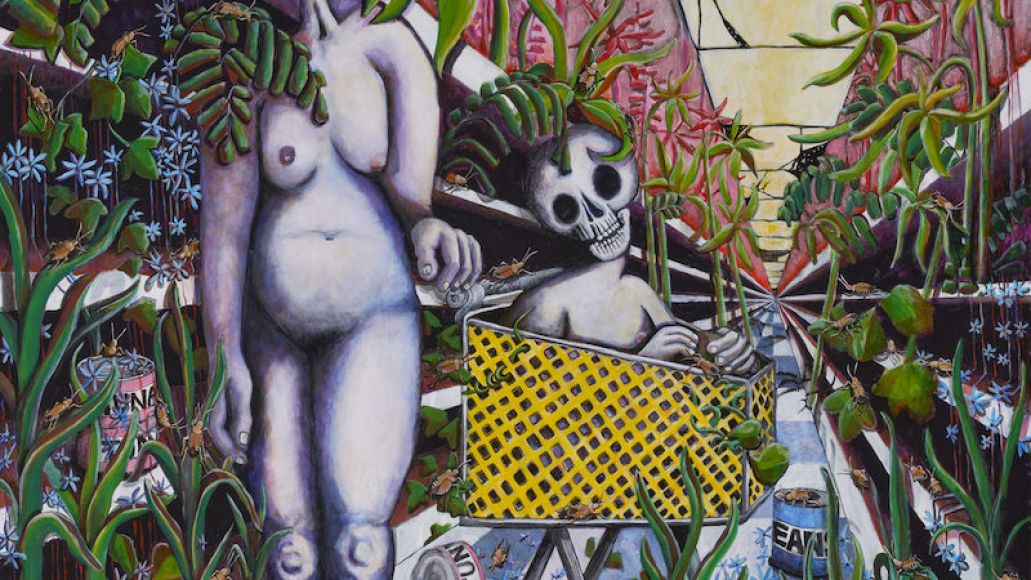 Indigo De Souza on the Love, Tears, and Cake That Went Into Any Shape You Take: "Everything Feels Like a Reflection of Myself"