In many ways, Aretha Franklin seems like the role Jennifer Hudson was born to play. Ever since her American Idol audition in 2004, where she brought the house down with a rendition of the Queen of Soul’s “Share Your Love With Me,” the Oscar- and Grammy-winning actress and singer has long had a deep stylistic and thematic connection with the renowned gospel artist.

It’s a connection Franklin herself must have recognized, given that she hand-picked Hudson to play her in her own biopic before her passing in 2018.

In our review, Carys Anderson highlights Hudson’s performance, noting that “with Hudson’s vocal talent and dramatic diligence, her portrayal of an inimitable musician somehow manages to cast a spark of a light now burned out.”

Ahead of Respect’s August 13th premiere, Consequence sat down with Hudson for a quick chat in Chicago to trace the origins of Aretha’s influence in her life, from childhood memories to American Idol to the ongoing mystery of why Aretha chose her.

We also broke down the work she did to get into the mindset of a Black woman in the music industry during the Civil Rights Movement, and the hard work it took to understand Aretha’s unique instrument (and how Hudson could train herself to emulate it).

Check out the conversation with Hudson, which has been lightly edited, below.

What was Aretha’s presence as a cultural and musical figure in your childhood?

You know what’s funny? I know now that she was even more present than I realized, especially once I started doing my research for the film and discovering her many albums. I didn’t even realize until the project that, growing up in church, the renditions of “Amazing Grace” I heard were from her, and the gospel blueprint she laid down.

Was there a track or an album of hers that your research dragged into focus for you? Do you have any new favorites?

Oh, all her singles, for sure. I had no idea she’d had eight studio albums before “Never Loved a Man,” or her other hits, as she called them. And now I’m so in love with them, oh my God. I can’t wait to sing them now. I’m so inspired by them as well. 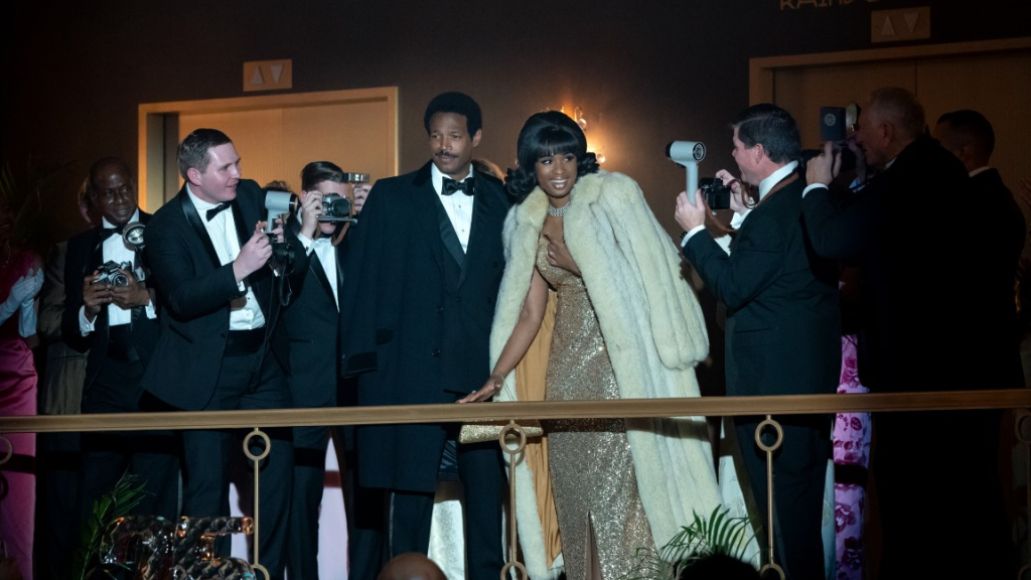 As I understand it, Aretha hand-picked you for this project. What was that moment like? What were some of the conversations you had with her about why she wanted you to take on her life story?

You know, that’s the one question I never asked! I can’t believe it. She never exactly said, and I never exactly asked. So I had to piece it together for myself. Obviously, everyone automatically thought it was a case of, “Oh, Jennifer sings and acts, you know, play me,” that kind of thing. And it was my dream as well.

Then I go back to my American Idol audition, where I sing “Share Your Love With Me” by Aretha Franklin. I knew she was a fan of the show, too. I don’t know, I’m kind of piecing it together for myself right now, but that is one question I wish that I’d asked her.

This is Liesl Tommy’s debut as a film director, coming off an acclaimed career on Broadway, where she’s known for having very detailed, involved rehearsal processes. Did that carry over into Respect?

Yes, she definitely brought her theatre background into it, which was really cool. The pre-production phase was completely different from any musical or biopic I’ve done. We had a workshop, which started very early on, before production, where we got to play with different things and get a sense of the character, and play around with the music.

Almost everybody in the cast is a musician on one level or another, so that played a huge role — to the point where I’d get confused about whether to think of them as musicians first or actors first.

What were some of the points you and Liesl wanted to cover about your conception of Aretha?

The most important thing, obviously, was respecting Aretha’s legacy, but also maintaining her gospel roots and her faith throughout. Even musically — yes, she ventured off into many genres, but the base underlying it was always the gospel. That was key to me, and I’d make that clear on set. I wanted to bring that presence of hers as well; she was a woman of faith. Liesl has her conception of Aretha, and I’m sure Tracey [Scott Wilson, screenwriter] has hers as well.

But what was most important was her faith, because my faith and my church is just as important to me as well. 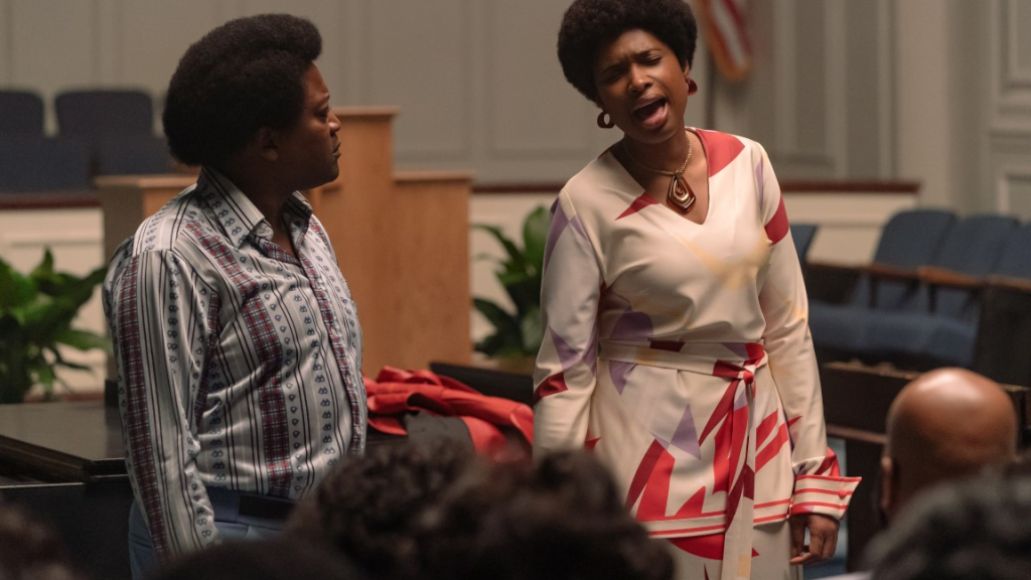 And of course, it’s a story about finding your power — so much of the movie sees Aretha being pushed back and forth by these two different male presences in her life [Whitaker’s C.L. Franklin and Wayans’ Ted White]. There are scenes where you have the pressure of being the focal point of a scene while also being the quietest person in the room.

That was a challenge, and it goes hand in hand with [Aretha and I] coming from two different eras, especially as women. Reading the script, I noticed that Aretha’s character wasn’t very expressive, and definitely not verbal. So I realized that I was supposed to tell the story with few words and minimal expressions, which was a challenge.

But thankfully, Liesl was there, as was my acting coach, who was very on the dime of how Aretha exists, how much space she takes up, how much she’s allowed to take up, her circumstances. I had to work hard to understand the era of the 1960s, and what it was like to be a woman, especially a Black woman, during that time. What was it like to be an artist, a mother, a preacher’s kid?

There are also the factors of respectability politics that play into it too, especially amid the rise of the Civil Rights Movement and the pressures Aretha is under to behave a certain way as a Black woman, while wanting to be more radical.

It was key for me to get an understanding of that time, and put myself in that position. Aretha obviously passed during the time we were making it, but I was supposed to sit with her and shadow her. But I knew I needed a reference for a woman of that time, and I ended up thinking, “Patti LaBelle.” So I reached out to Patti, since she was also a woman and an artist at that time, I felt she was the next closest person to be able to speak to Aretha’s experience. I needed clarity on what it was like to be all those things during that time — to know how to exist, the circumstances, what a woman’s place was.

I found a new respect for Aretha after that. To think: How bold was it for a woman to take a man’s song — Otis Redding’s “Respect” — in an era like that, and make it an anthem for so many women. You can’t help but respect that! And what it cost to do that. If you did that today, it’d be like [shrugs] “Okay, so what? You sang the song.” But to do that in a time like that, it makes you love and respect it even more. 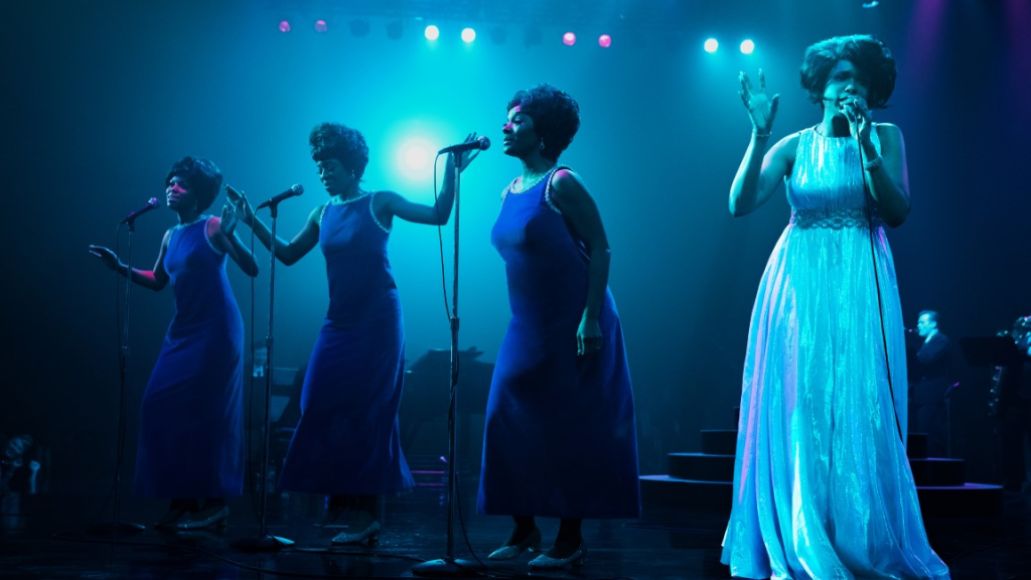 One of the biggest challenges, I’m sure, was locking down Aretha’s distinctive voice. You’ve got your own signature sound, but so did she. What kind of research and training did you do to emulate hers?

You know what? A lot of her inflections still stick with me in my singing. And obviously, I’m going to keep them [laughs]. But I worked with Thom Jones, who was the dialect coach, and one of the first things we did was look at her instrument and mine. Keep in mind that in this, Aretha starts singing in her teen years, so you have to build a vocal arc. I’m 39, and I have to sing as a woman who starts singing at 17 and then grows older. So we had to focus on how to place our instrument and how it’s built. “How can we make this different from Jennifer Hudson doing a tribute to Aretha?” Of course, it’s already different because you’re telling a story, with music as the narrative.

What we found was that our range is pretty much the same, but the way we use our instruments is very different. Thom said Aretha sings from the top of her head, which means that I would have to switch my placement. I asked him, “Where do I sing from?” He said that I sing from my feet. What does that mean? I didn’t even know these things about myself. But I had to learn those things to be able to channel her as well.

It’s not meant to be copying or an interpretation of her, but paying homage — allowing the influence she already had on me since childhood to come through. And at the same time, using her approaches, techniques, and signature riffs that she’s so well known for.

There’s a phrase that bookends the film — “Music will save your life.” Do you feel like that applies to you?

Oh my God, it has, yes. It’s my blueprint. That’s how my kids find me in the house. The music is playing, they go, “Mommy?” It dictates my every emotion. And it’s all I’ve ever known.

Jennifer Hudson on Bringing Aretha Franklin (And Her Voice) to Life in Respect: "I Grew Up Singing" Those Songs