A recording of Joni Mitchell’s 1969 debut performance at New York City’s Carnegie Hall is receiving its first-ever commercial release on November 12th. It will be available as a standalone LP and as part of the upcoming box set, Joni Mitchell Archives Vol. 2: The Reprise Years (1968-1971), due out the same day.

At 25 years old, the folk legend took the stage at the iconic venue on February 1st, 1969, one year after the release of her debut album, Song to a Seagull. Taking in the acclaimed performance was a sold-out crowd including luminaries such as Graham Nash, who was Mitchell’s partner at the time, and Bob Dylan.

To open the show, Mitchell played “Chelsea Morning,” a song about her apartment on West 16th Street in Manhattan’s Chelsea District. The singer-songwriter also performed the Song to a Seagull cut “I Had a King” and several tracks destined for future albums like Clouds (“That Song About the Midway”), Ladies of the Canyon (“Blue Boy”), and Blue (“Little Green”).

In addition to being included as part of the aforementioned box set, the performance will be released separately on 3xLP. An exclusive 180-gram, white vinyl version limited to 3,000 copies is solely available on Mitchell’s official website. The sixth side features an etching of the American eagle that adorned her skirt at the Carnegie show.

The vinyl liner notes include a backstage story Mitchell shared with Cameron Crowe:

“I flew my parents [Bill and Myrtle] in for the show. We walked over to Carnegie Hall from the Plaza Hotel. Graham was wearing a floor-length maxi coat, black velvet, but with a pink-and-white chiffon tie-dye scarf. And I was wearing a green-and-white plaid coat. I’ve still got it. It looked like something from a Dickens play. My mother was embarrassed to be seen with us!”

Nash added, “Joni had bought a long vintage skirt that was made for a parade. On the front, in colorful sequins, was a large American eagle, and on the back was… a large artichoke. At some point earlier in the evening Myrtle said, ‘Oh, Joan. Is that what you’re going to wear at Carnegie Hall? They look like rags.'”

To finish the story, Mitchell said, “My father came forward and said, ‘Oh, Myrt, she looks like a queen in those rags.’ I loved him for that. Thank God for Papa. He gave me back myself.”

Watch a video of the “Chelsea Morning” performance below. Earlier this year, Mitchell released a massive reissue of her classic album Blue, called Blue 50 (Demos & Outtakes). 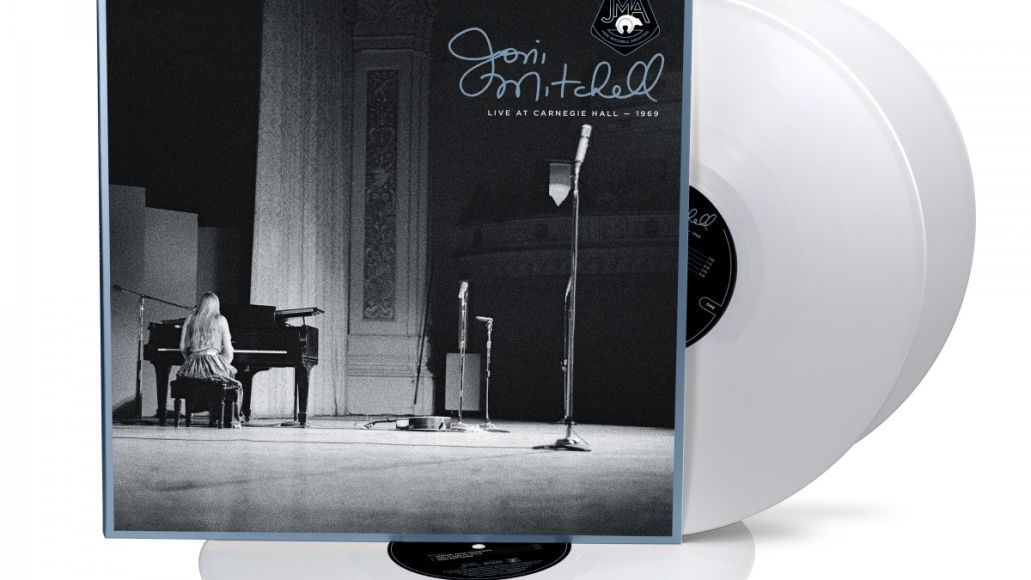