The Pitch: Raised by a brutal father who leads the centuries-old Ten Rings criminal organization, Shang-Chi (Simu Liu) escapes his home and takes refuge in San Francisco. He builds a life for himself with a steady if unglamorous job, friends (such as Awkwafina’s Katy), and relative peace. Ten years after running away, his father (Tony Leung’s Wenwu) sends his foot soldiers to return him home, drawing Shang-Chi back into a world he’d tried to leave behind — and reuniting him with his estranged sister (Meng’er Zhang).

Convinced there’s a way to bring his late wife (Fala Chen’s Jiang Li) back from the dead, Wenwu is prepared to stop at nothing to reunite his family. Shang-Chi is forced to confront his past and his heritage to prevent his father’s potentially world-ending plans.

MC-FU: Marking the 25th (!!) film in the Marvel Cinematic Universe, it’s impossible to take Shang-Chi and the Legend of the Ten Rings at face value. For context, there have only been two introductory solo stories in the MCU’s last five years: 2016’s Doctor Strange and 2019’s Captain Marvel. (Black Panther and Spider-Man were both well established in 2016’s Captain America: Civil War before their respective standalone pictures.) Shang-Chi, then, is arguably the best Marvel movie to welcome a purely new character into the universe since 2014’s Guardians of the Galaxy.

As is often the case with these heroes, a lot of that has to do with the stars who portray them. Simu Liu carries the charm and presence — with just enough troubled history under his soft countenance — to make us care about Shang-Chi almost immediately, despite the comparatively little time spent in his “normal” life before the plot takes over.

Leung’s Wenwu delivers a masterclass in relatable, motivated villainy, worthy of what could be the most screen time of any MCU antagonist besides Thanos. His love of his family, warped as it may be, triggers every plot detail of the film. Furthering that already compelling family drama are the parallel performances of Zhang as Xialing and Yeoh as Jiang Nan — one hardened by estrangement, the other strengthened by sacred duty, both utterly captivating and badass.

Much of these plot and character points are revealed in flashback, a technique director Destin Daniel Cretton uses judiciously and masterfully. Working from a script he co-wrote with Dave Callaham and Andrew Lanham, Cretton patiently broadens the world of Shang-Chi and the Ten Rings through constant trips to the past. Motivations are revealed well after actions are taken, and even Shang-Chi’s martial arts skills aren’t explained until we’ve already seen him literally tear apart a bus in an incredible close-quarters action piece.

Yet it’s never clunky, and seeing our hero’s abilities before learning how he acquired them allows us to readily accept them without a rushed training period (see: the indeterminate timeline for Doctor Strange’s rise to Sorcerer Supreme). Whether it’s an interpersonal relationship or a subtle hand movement, Cretton beautifully lays out the details of the story in ways that not only keep the plot moving, but elevate it. (The same could be said for how the larger MCU is inserted into Shang-Chi. We’re well past the point where we need to remind viewers what the MCU is, and can simply place references and characters as part of the story’s natural flow.) 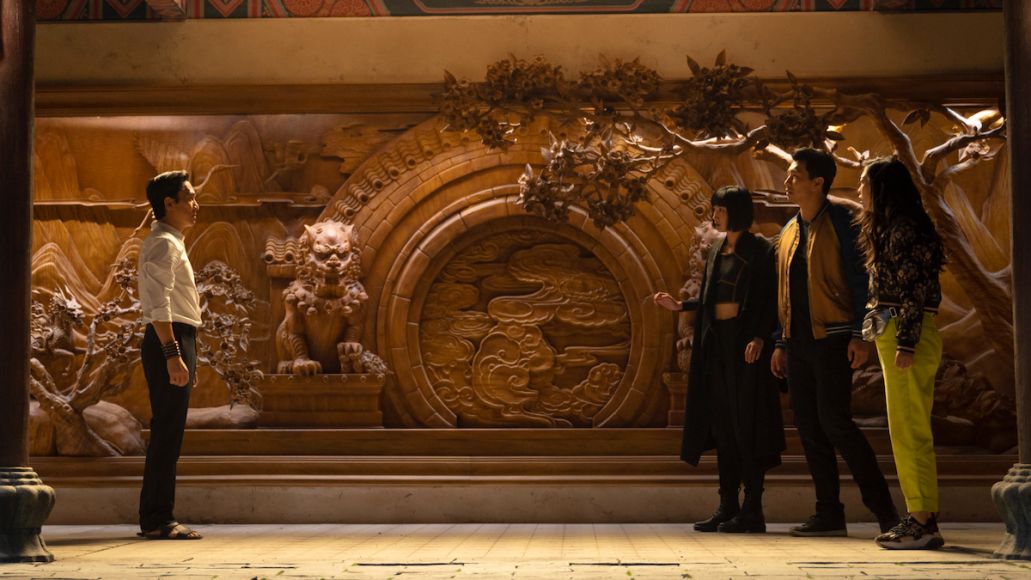 Shang-Chi and the Legend of the Ten Rings (Marvel)

A New Legend: Undoubtedly, Shang-Chi is going to make Liu a certified star, and Cretton’s Hollywood stature should rise right alongside him. Having established himself with a handful of well-received independent features, Cretton’s work on this superhero blockbuster should earn him plenty of big budget esteem. From the Jackie Chan and Dragon Ball Z-inspired fights (some of the best the genre has seen) to the wondrous mystic and naturalistic settings, the film’s visual language is gorgeous. There are sequences in the final act that are so absolutely outrageous they’d slip into parody with a less thoughtful director; aided by a stunning score from Joel P. West, these wild visuals end up some of the most powerful in MCU history.

And let’s be clear: There is some outrageous MCU stuff in the back half of Shang-Chi. The switch from grounded mysticism to straight up dragons is swift, and although it’s not the most evenly keeled jump, Cretton keeps it from going totally off the rails. (As does a shocking cameo that Marvel has done an impressive job of keeping under wraps.) Once the story lands in Ta-Lo, the mystical home of Shang-Chi’s mother, we meet some visually striking creatures that look like more realistic Pokémon (with one in particular a clear ploy to stock stuffed Disney toys). Whereas the War Rhinos in Black Panther felt like a stretch, these things at least feel like they belong.

Which, again, is thanks to Cretton. After building a largely physical superhero movie with the powerful Ten Rings as the only comic-y element, the third act dives into a supernatural world that makes Doctor Strange feel practical. To its credit, the movie doesn’t completely trip on the finale transition the way something like, say, Wonder Woman did, save for a few, quick sloppy beats. 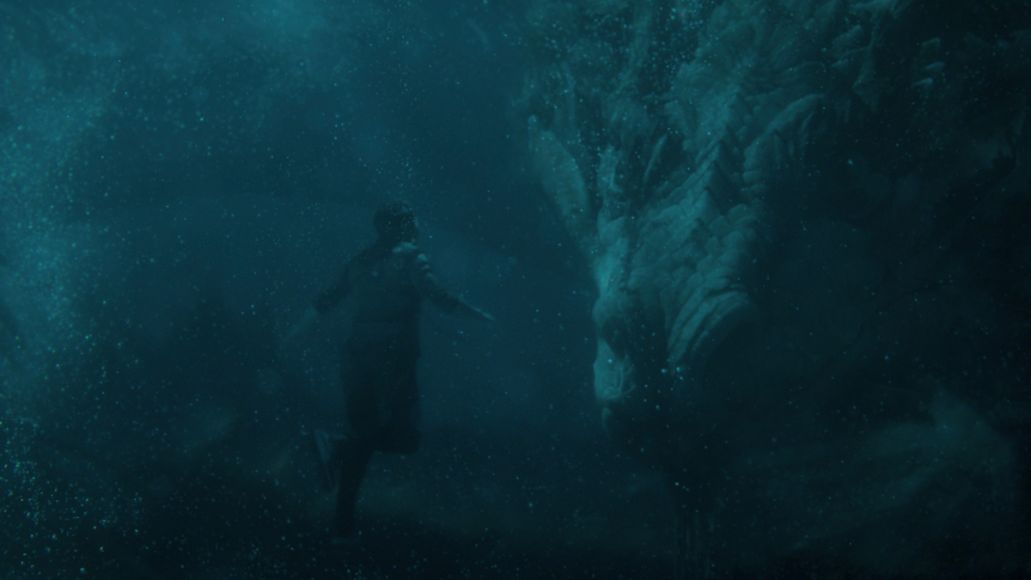 Shang-Chi and the Legend of the Ten Rings (Marvel)

Awkwardfina: Unfortunately, a lot of those less taut beats come from Awkwafina’s Katy. Leaving aside the (valid) controversy that popped up on Black and Asian Twitter ahead of the movie’s release, Awkwafina does a fine job as Katy. She’s funny, likable, and the brief look at her home situation provides a realistic view of Chinese-American family life. But the character also serves as the audience’s vantage point: the normal outsider dragged into the epic, magical story of her friend/loose-romantic-interest, Shang-Chi. At that, she at times feels incongruous, her comic relief as jarring as it is humorous, her amiable shock putting the breaks on the plot’s more serious trajectory. And then, of course, there’s her participation in the final battle, something that fits as character arc but feels cheap even by comic book movie standards.

Still, at least there’s a point to her being there; Wenu has no reason for having two top assassins by his side. Andy Le’s character is mainly set dressing, a cool costume as a viable sparring partner for Shang-Chi, but the fact that we never learn his name is Death Dealer until the credits shows how valueless he is. Florian Munteanu’s Razor Fist is less compelling as a character, yet has far more to do. It would have been better to settle on one or the other, as the ancillary villains are disjointed from one another as well as Wenwu, leaving neither one feeling particularly necessary.

The Verdict: If Shang-Chi is the best MCU introduction since GotG, it’s also the best standalone adventure since Black Panther. There’s a storytelling maturity that demonstrates Marvel is still willing to go back to basics — even as it gets more fantastical. It’s also a visual feast, with some of the most outlandish SFX scenes in any MCU entry. And yet the third act works better than your standard superhero movie, holding up to its own story as well as the interconnected universe (keep an eye on the color choices of some of the powers… just saying). With abundant talent in front and behind the lens, it leaves doors wide open for a post-Infinity Saga Phase Four that — believe it or not — is unlike anything we’ve seen before.

Where’s It Playing?: Shang-Chi and the Legend of the Ten Rings punches into theaters on September 3rd, landing on Disney+ after a 45-day release window on October 18th.

Shang-Chi and the Legend of the Ten Rings Kicks Off Marvel's Phase Four with Renewed Originality: Review