Trivium have announced their new album, In the Court of the Dragon, which arrives October 8th. The band has also unveiled the video for sophomore single “Feast of Fire.”

The new song is a technical gem, seamlessly blending elements of thrash and melodic metalcore as only Trivium can. Hooky vocals give way to heavy breakdowns and shred soloing, as the band cover all its extreme-metal bases.

According to bassist Paolo Gregoletto, the song actually originated from the bridge of an existing composition. Apparently, the bridge section was just too good, so the band made an entirely separate song around it, which became “Feast of Fire.”

“There’s always that one song you aren’t expecting when you begin writing a new album,” Gregoletto said via a press release. “It could be a riff written on the spot in the rehearsal space, a lyric that pairs just right with a melody, or in the case of ‘Feast of Fire,’ sitting right there in front of us in the middle of a demo that [guitarist] Corey [Beaulieu] brought in.”

He continued: “We were well into pre-production at Full Sail [in Orlando] when we all decided that something about the demo we had tracked was good but could be even better. Our producer Josh Wilbur even had in his notes: ‘Bridge is special, maybe so special it needs its own song.’ We tore the song apart and began again on the spot.”

In the Court of the Dragon was recorded and mixed by Wilbur at Full Sail University in Orlando during fall of 2020, in the midst of the pandemic.

“We went into this album knowing we had time to consider everything and anything that came about during this period,” Gregoletto said, “and if need be, we could start again if it didn’t feel right given that no touring was on the horizon.”

We previously heard the title track for the new LP last month, but with today’s announcement, Trivium have finally revealed the full album details and artwork — a remarkable original oil painting by French artist Mathieu Nozieres.

“While the music of In The Court of the Dragon was taking shape, we knew we needed epic artwork of the type that you might see on the wall of an important museum from a long dead renaissance master,” said Trivium frontman Matt Heafy. “After extensive research, we found one of the few living artists who is capable of creating artwork like Caravaggio and Gentileschi — painter Mathieu Nozieres.”

Trivium are set to support Megadeth and Lamb of God’s upcoming “Metal Tour of the Year.” The trek kicks off August 20th in Austin, Texas, with tickets available via Ticketmaster.

Pre-order Trivium’s new album In the Court of the Dragon here. Stream “Feast of Fire” and check out the artwork and tracklist below.

In the Court of the Dragon Artwork: 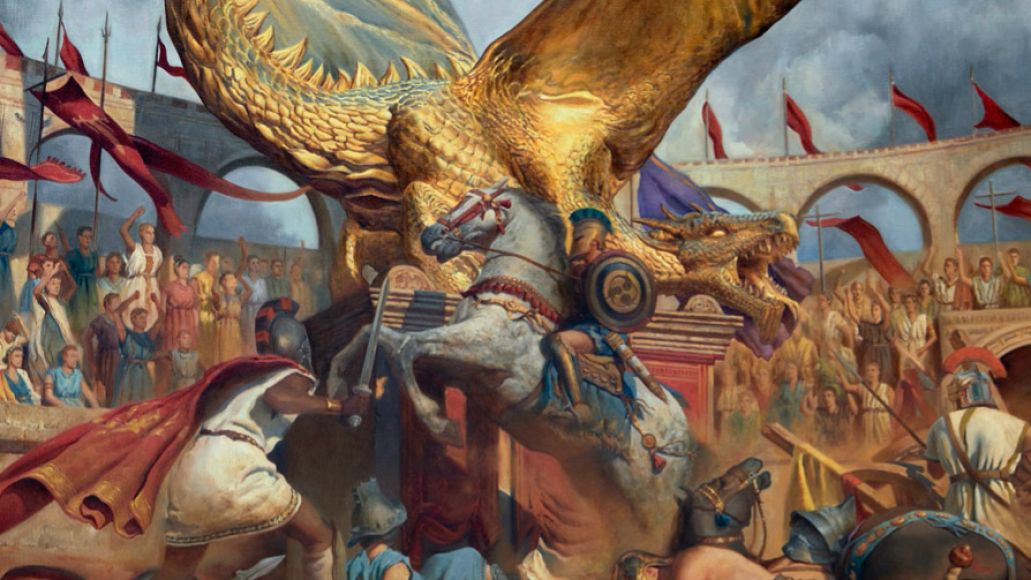 In the Court of the Dragon Tracklist:

Trivium Announce New Album In the Court of the Dragon, Share "Feast of Fire": Stream