As the Governors Ball Music Festival turns 10, we’re taking a look back at the inaugural 2011 event. You can check out everything we’ve published around the anniversary here.

One decade ago, a couple of untested twenty-something best friends set out to create a little music festival just off the island of Manhattan, putting on a one-day event on June 18th, 2011. In the 10 years and nine iterations since, Governors Ball has become an indelible part of the East Coast’s music landscape, morphing into New York’s answer to Coachella, Bonnaroo, and Lollapalooza; a place where the buzziest acts in music and its biggest fans converge into one memorable weekend. Here, founders, staff, and artists who played the very first Governors Ball reflect on how everything came together without nary a hiccup. This is the oral history of the first Governors Ball Music Festival.

HUMBLE BEGINNINGS: A BALL IS BORN

It all begins with two best friends with a dream: Tom Russell and Jordan Wolowitz.

Tom Russell: Jordan and I knew each other from high school. We’ve been best friends since sophomore year.

Jordan Wolowitz: I was working for Marsha Valasic, a legend in music at ICM. Tom was at Superfly.

Russell: I had been with Superfly in 2010 since 2005. Jordan was at ICM. At Superfly, I was overseeing operations and product management, and working on festivals like Bonnaroo and Outside Lands. I had the operational knowledge of festivals and large scale events and Jordan over at ICM had knowledge on all things talent.

Wolowitz: In 2010, a friend of mine was starting a website [BroBible.com] and he wanted to throw a big concert to promote his brand. So I went to Tom, my best friend, to help plan it. We rented out New York’s Terminal 5. I booked a great little bill with some artists around our age, including Pretty Lights. The show ultimately sold out, and that helped us gain a good relationship with the Pretty Lights team. Eventually, they were looking for their next show in New York. That’s when Tom and I were starting to get the idea for Governors Ball.

Russell: We saw it was a unique time in the music industry, when all of these festivals were becoming an important part of the cultural landscape. Meanwhile, New York City, our hometown, didn’t have one. So we decided to do our very best and launch one. We spent 2010 trying to figure out how to make that happen while also doing our full-time jobs. Once we knew we were a go, we quit our jobs in December 2010.

Eventually, the ragtag duo zeroed in on the 172-acre Governors Island. Located just 800 yards south of Lower Manhattan and only accessible by ferry, the island’s unique apostrophe-less moniker dates back to the British colonial era. The US Army were its main inhabitants in the first half of the 1900s, while the Coast Guard took up residency in the latter half, resulting in plenty of infrastructure being left in place. While a casino was mulled over in the ’90s, it became public property in 2003.

Russell: By the summer of 2010, there were a ton of events on Governors Island. Bowery Presents had some success booking some events there, and it became another great outdoor venue. We went and saw the Rock the Bells festival and knew it’d be a great location for what would become Governors Ball. We ended up working with a production company who had worked with those concerts. We were in a bit of a time crunch, so we wanted to do whatever we could to get the greenlight on Governors Island. We went to a production team who knew Governors Island the best.

Wolowitz: I think Girl Talk was the next phone call I made, to [agent] Sam Hunt, and we just built out this lineup from there.

Alan Palomo (Neon Indian, performer): I can’t recall the first time I heard about it, but if I had to take a wild guess, my manager asked me, “Hey, do you want to play a fun show in New York?” and my immediate answer would have been, “Yes!”

A roster slowly began to coalesce, with the team recruiting a group of rising artists bubbling just under the mainstream.

Wolowitz: We were 26 and somehow had the foresight that we had nothing to lose. We were young, had no money [personally], and no one relying on us in our personal lives. So it was the right time to do it.

Josh Guss (Box office manager, designer): Originally it was Tom, Jordan, and Yoni Riesman. I grew up with Yoni, he was a childhood friend in Atlanta. I was very close with him and I knew Tom and Jordan. When it came up they were doing a website and needed design help, that’s when I initially [joined the team]. So they asked me to come up to New York to help out with design and website stuff. I was living in Atlanta at the time.

Wolowitz: We started the festival on such a small level that we really didn’t get too much pushback. It was mostly people joking with us, saying, “Good luck, haha. No one’s ever been able to do this.” But if you look at the lineup from that first year, a lot of the artists were either around our age, or just a little bit younger or older. Our three headliners were Girl Talk, Pretty Lights, and Empire of the Sun. We also had a very young artist named Mac Miller.

We didn’t go that big at all that first year. We saw around that time that a lot of festivals were trying to [do that]. I guess we were responsible in a way, where we didn’t go too big with talent. Our capacity was 20,000 instead of the usual 50 or 60,000. So we didn’t get too much criticism going into it. Additionally, we were working with young agents, as well in terms of [now-top UTA agent] Jbeau Lewis, who gave us Empire of the Sun.

Guss: I wasn’t in a position to invest, but even if I was, the idea of doing a one day event in New York City [was risky]. It was like, who knows how this is gonna turn out? But I was happy to support and be hired to help and go from there.

Wolowitz: Compared to other festivals that had crashed down, whether Fyre or Woodstock, this wasn’t nearly as expensive. Our headliners were making, in hindsight, nothing like the headliners who got booked for the big festivals that start out. It was on a totally separate playing field.

Luke Steele (Empire of the Sun, performer): For me, 2011 was an incredible time. A few years earlier I got married and the week the Empire record dropped [2008’s Walking on a Dream], my daughter was born, and it was like a blessing for the album. It was a moment that changed my life forever. After that, we toured the whole world, and Governors Ball was one of the highlights. Doing these ginormous festivals and living that childhood dream: I was in a band that plays on stages all over the world.

Gregg Gillis (Girl Talk, performer): 2011 was an extremely busy year for me — I was playing a lot of festivals and shows. At that point in my life, I was living in Pittsburgh, but all of my friends were living in New York. So after a whirlwind year, I thought it’d be fun to go to New York, play a show, and hang out with a bunch of people I came up with.

Palomo: In 2010, I was finishing our second record and was just back from Helsinki. At the time it was a sensation of anxiousness of getting a sophomore record out. Back then there was this idea of the elusive sophomore record. There’s this thing where you hit a little bit of a slump, so I was trying to combat that as voraciously as I could and just put in the hours to try to make that record sick. Thankfully, I got songs like “Polish Girl” out of it.

The only thing missing was a name.

Russell: The name was completely crowd-sourced.

Guss: I think one of the names that was first thrown around was Kick Step.

Russell: We sent an email out to dozens of friends asking them to give us some ideas. As soon as we saw “Governors Ball,” we knew that was the winner.

Tickets became available on February 24th, 2011 and started at $75. Billed as “a massive midsummer dance party of epic proportions,” as Gothamist presciently noted, “This summer marks the first in what is hopefully an annual event dubbed the Governors Ball.”

Russell: Our hope the first year was to not lose money. When you’re planning a first year event, you start with a budget but as you get closer and closer you realize how off-base it was. As it got closer, we saw our expenses getting larger, but once we got to May, we knew we were going to be in the black. At that point, our focus shifted from financial to execution. There were so many unknowns and we wanted to make sure we nailed it.

Guss: At some point, they realized they needed someone to run the box office. It was one of those first-year event decisions and a lot could be improved on, I guess. They asked if I would do box office and credentials. I said sure, but I didn’t have any idea what that entailed, so that’s how I wound up getting thrown into that world during that event.

Russell: At one point the week of the show, our ticket sales were so much stronger than we had anticipated that we had to get approval from Governors Island to sell more tickets. That was a stressful conversation, but we were lucky enough to get a greenlight for that. Another issue was credentials — there were a lot of late nights in our apartments and bedrooms trying to pack credentials for artists, guests, patrons. It was truly a family operation.

I remember we started loading in the show the Monday before. We had five full days to build the festival and had done a number of site visits leading to the event. Governors Island is not open [all] year, and the area where we did the festival was not open at all. So we didn’t actually see the venue very closely in advance of the event. That Monday was our first time there [aside from seeing events in the past]. But Governors Island is tricky and there are only so many ferries that can service the island, especially larger ones bringing over production equipment. 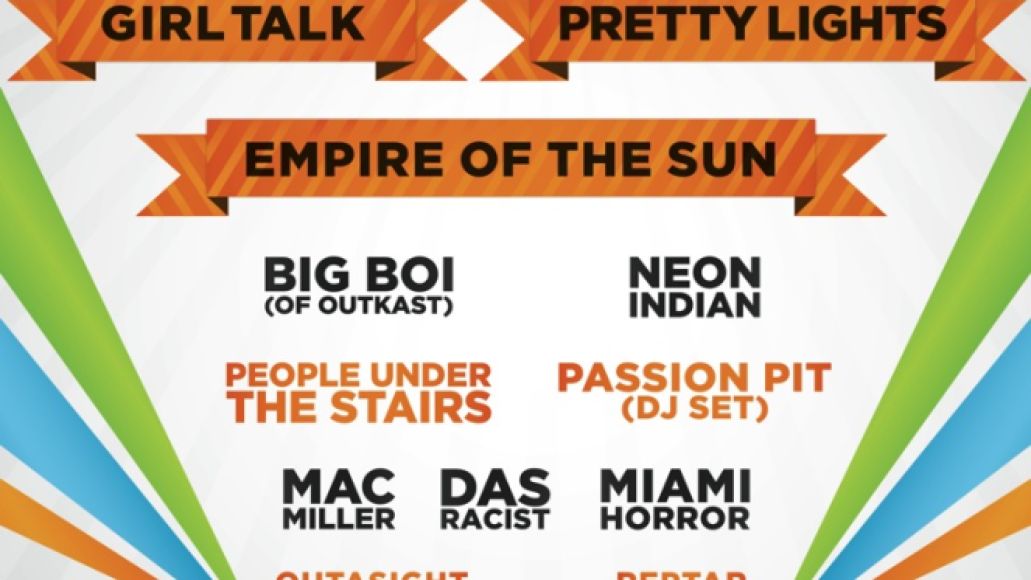 With a sunny forecast on their side, everything was in place.

Russell: The night before the festival, there was no sleep to be had. We were on the island until the very last ferry left, which was around 2:00 a.m. There was seemingly an insurmountable list of things that needed to be done before doors at noon the next day. Everyone was hunkered down in the trailer, tending to everything that needed to get done.

The weather forecast was good and people were really excited. Everything seemingly was coming together at the last moment and we were all trying to make it through. Everybody was so tired and so overworked and using the excitement as motivation and energy to get us through. I think it was just pure adrenaline that got us over the finish line…