The Pitch: Twenty-five years after its release, Jagged Little Pill remains one of the most indelible albums of the last several decades. It opened doors for female artists to stand on their own without having to be defined next to male acts, and catapulted young Alanis Morissette to untold heights of fame and fortune after a decade of languishing as a teen-pop wannabe.

In Jagged (yet another film in Bill Simmons’ Music Box series of music docs for HBO, alongside Woodstock ’99 and Listening to Kenny G), Alison Klayman (The Brink) sits down with Morissette to talk about her early career, how the album changed her life (and the music industry as a whole), and the impact that her notoriety had on her in the wake of the album’s explosion.

Isn’t It Ironic? In the leadup to the film’s premiere at TIFF, Morissette confessed to Rolling Stone that she would not be supporting it, blasting it for including “implications and facts” about her life “that are simply not true.” Watching it, though, it’s difficult to imagine what the issue could be; if anything, Klayman’s doc is too fawning, too uncritical of its subject, unwilling to dive deeper into the demons that plagued Morissette throughout her time in the spotlight.

At its heart, Jagged is a by-the-numbers music doc to a fault, a pleasant-enough hagiography of the artist in question that nonetheless fails to give us anything more than warm fuzzies for 100 minutes.

What could Morissette’s objections be? We can only guess. Perhaps it’s related to her implied sexual assault and abuse by music executives in the early years of her career — subjects she’s broached both implicitly and explicitly, especially in the musical made from the album itself. But those events solidify her as the victim of a system we all agree to be odious and in need of radical reinvention (“Women don’t wait,” she snaps, when discussing the age-old rejoinder to accusations of sexual assault. “The culture doesn’t listen.”).

Or perhaps it’s the revelation that her all-male backup band is filmed giggling about how they’d leverage Morissette’s fame as a girl-power icon to lure groupies into sleeping with them. But Morissette makes clear that she was disgusted when she found out what they were doing, and also felt powerless as someone thrust into such a position of responsibility to assert herself in that way. 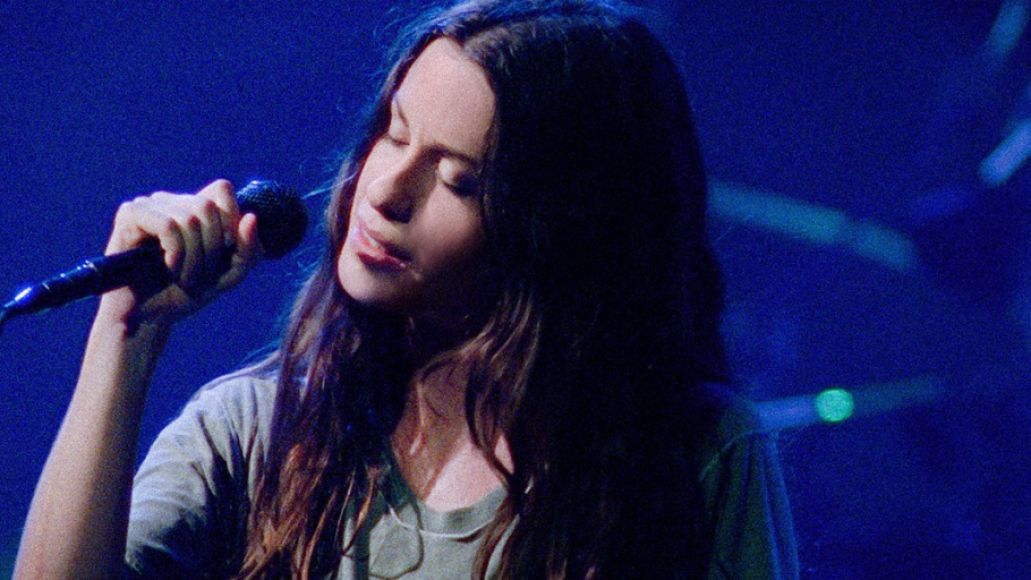 Maybe the bigger issue is that, in Klayman’s doc, those issues don’t get the real estate they deserve, instead glossing through a Behind the Music-style romp about Morissette’s climb to the top of the music business in the mid-’90s. Friends, bandmates, and colleagues crop up to talk about her genius, and other female artists, like Shirley Manson of Garbage, gush about the door she smashed open to bring other great female acts into the spotlight along with her. Without her, they claim, Lilith Fair wouldn’t exist.

Hand in My Pocket: Oddly enough, it’s the sections relating to Jagged Little Pill‘s meteoric success that drag the most, offering few surprises to anyone but the most casual neophyte to Morissette’s music (and if that’s the case, what are you doing watching this?). There’s little spice to the proceedings, with interview after interview extolling Alanis’ genius, as Klayman treats us to the same clips from a handful of live shows, with cursive lyrics to the songs letting you hum along to the tunes.

Some stretches teeter perilously close to feeling like a music video compilation for the album itself. Yes, the album is an unimpeachable masterpiece, and maybe that’s the problem: Too few people disagree with that statement, whether then or now, to give the journey to its chart-topping success any conflict or heft. (We don’t even find out who she’s talking about in “You Oughta Know!”)

The Verdict: What it all comes down to, really, is that Alanis Morissette’s life is gonna be fine, fine, fine. Jagged doesn’t have enough meat to chew on to really compel as a doc, preferring instead to focus on Morissette’s pleasant, self-effacing demeanor and deserved success, stopping only occasionally to discuss the obstacles she had to overcome as a woman to make it as a musical artist. If you’re looking for a heartwarming, affirming doc about how yes, you’re right to love Alanis Morissette, it’ll probably work for you. But don’t expect to learn anything new, or be wowed by its presentation.

Where’s It Playing? Jagged premiered at TIFF on September 14th, in advance of its debut on HBO November 19th.