Machine Gun Kelly’s headlining set at Louder Than Life festival in Louisville, Kentucky, on Saturday (September 25th) was certainly an eventful one. The rapper turned pop-punker was heckled throughout the gig, and at one point threw a punch at a fan who jumped the barricade to confront him.

It’s safe to say that the fans turned on MGK due to his recent feud with Slipknot singer Corey Taylor. While Slipknot weren’t on the bill for Louder Than Life, a lot of bands on the Saturday lineup share fans with the masked metal act, including Disturbed, Volbeat, Code Orange, and more.

Video footage shows Machine Gun Kelly performing to a chorus of boos, with festival goers flipping him the bird. At one point, when the singer made his way down to the photo pit, a couple of fans jumped the barricade to charge at MGK. While security got between them, MGK clearly throws a punch at one of them, although it’s hard to tell whether it landed.

At his recent Riot Fest show, Machine Gun Kelly commented onstage, “You all want to know what I’m happy that I’m not doing? Being 50 years old wearing a f**king weird mask on the f**king stage.”

Corey Taylor had previously criticized MGK’s move from hip-hop to pop-punk. And then it turned out that Taylor was supposed to guest on MGK’s album, but it didn’t pan out over creative differences.

Fan-filmed video shows Machine Gun Kelly taking a swing at a fan in a gray shirt, as well as the audience’s reaction to MGK’s set. In addition, Heavy Consequence‘s photographer captured images of MGK’s set, including a confrontation with a shirtless fan. Check it all out below. 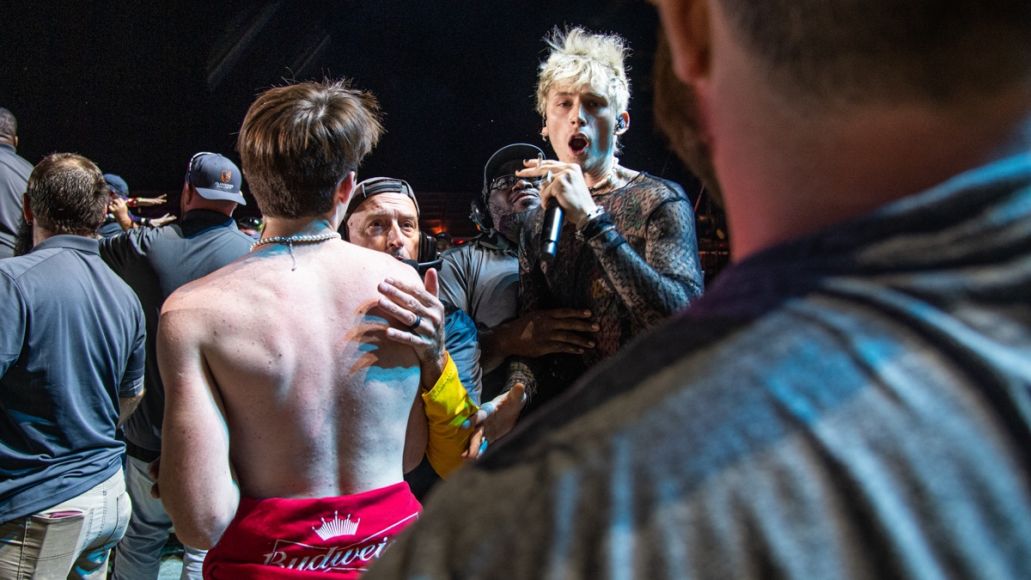 All photos by Amy Harris (@thefirst3songs)