The Pitch: In 1996, Oasis was riding high off the success of their second album, (What’s the Story) Morning Glory?, and an entire generation of British fans were entranced by Noel and Liam Gallagher’s earnest, po-faced lyricism and catchy acoustic tunes. They were big, to be sure, but their decision to host a two-day gig at Knebworth House in Hertfordshire on August 10th and 11th, 1996, was a surprise both to fans and organizers. Knebworth, after all, was the kind of venue that hosted legends like Led Zeppelin and Queen.

Even so, the event became one of the biggest concerts in English history, drawing nearly a quarter-million people to Knebworth’s stages between the two days. And, for those die-hard Oasis fans, it would prove to be one of the most pivotal weekends of their lives.

Thank You For the Good Times: Concert docs are, at their heart, a treat for fans and fans only: either you were there, in which case you want to relive the experience, or you’re a diehard fan of the band who wishes they’d been there. Oasis Knebworth 1996 hews closely to that formula — it’s essentially a chronological retelling of the story through archival footage and a few other methods — but through the perspective of the fans who were there, and for whom the weekend still means a lot.

You won’t find talking heads, and director Jake Scott (son of Ridley, an experienced music video director in his own right) keeps the proceedings moving at a manic pace befitting the era. An early fan describes ’96 England as the age of Trainspotting, and Scott’s style certainly replicates the frenetic energy Danny Boyle affected in his seminal breakdown of English lad culture at the time — all grainy handheld and near-subliminal cross-cuts. At the same time, when the concert finally starts and the Gallaghers take the stage, he lets the performances breathe, giving longtime Oasis fans the chance to soak in the energy.

And energetic it is: If you’ve got any kind of affinity for the band, their Knebworth performance sees them at the height of their powers. Liam’s Manchester drawl pours past his John Lennon glasses and cable-knit sweater like molasses; Paul McGuigan’s bass and Noel’s lead guitar power through the band’s simple-but-infectious chord progressions. Scott cuts these songs together capably using archival footage and a few choice words from the fans (more on that later), but mostly lets the songs breathe on their own. He knows Oasis never sounded better than they do here, and he lets us know it. 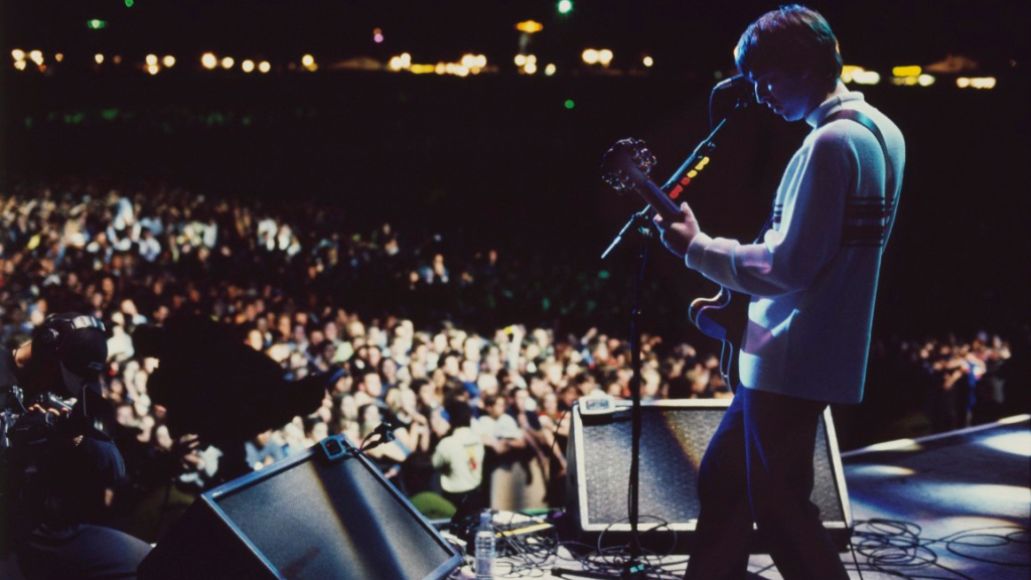 You’re Gonna Be the One That Saves Me: Knebworth 1996 is less a profile of a band at its height than it is the fans, for whom the weekend became one of the most important moments in their lives. We hear interviews from over a dozen fans who regale their at-the-moment feelings of being sucked into the crowd, of feeling the collective energy at Knebworth. Other fans mention Knebworth coinciding with seminal moments that would shape their futures: a brother’s cancer diagnosis, a girlfriend’s pregnancy announcement.

Contemporary footage zooms in on fans, decked out in their finest ’90s British gab (low-rise pants and bucket hats galore), telling the camera what they would give Oasis if they could. (One fannish girl admits that she’d give “Herself”; another lad jokes, “A haircut.”) The only real non-diegetic footage comes in the form of reenactments of one fan’s story to listen to the concert over the radio — Sellotaping their aerial to the ceiling to get the best reception, being lightning-quick on their tape recorder to switch sides before the next song starts. Those bits are quite cheesy and occasionally detract from the in-the-room feel of the rest of the doc, but they’re hardly a great offense.

It’s all very warm and fuzzy, the very opposite of a takedown documentary like Woodstock ’99. Simply put, this is a nice doc about nice people having a nice time outside with their favorite band. There’s very little discussion of Noel and Liam’s famous feuds, or any other controversies that would follow the band around. This single weekend in 1996 was a perfect moment in time, before the world got complicated and the responsibilities of adulthood weighed down on its teenage attendants. If nothing else, Oasis Knebworth 1996 is an ode to that sense of nostalgia.

The Verdict: More than a concert doc and less than an artist profile, Oasis Knebworth 1996 hits that sweet spot of giving misty-eyed Oasis fans what they want: A glimmering look back at one pleasant weekend and the life-changing music that defined it. You’ll find little conflict here, no mention of Noel and Liam’s famous feuds or any debauchery that happened at Knebworth itself.

With its uncensored showcases of Oasis at the height of their powers, punctuated by the fawning recollections of their fans, Scott’s doc is truly a time capsule of nostalgic Millennial memories from the time we thought was “the end of history.” Good vibes only.

Where’s It Playing? Oasis Knebworth 1996 is gonna be the one that saves you in theaters worldwide September 23rd.