Welcome to Dissected, where we disassemble a band’s catalog, a director’s filmography, or some other critical pop-culture collection. It’s exact science by way of a few beers. This time, we follow Iron Maiden’s legendary career, from their 1980 self-titled debut to their most recent effort, 2021’s Senjutsu.

For over 40 years, Iron Maiden have proven to be one of heavy metal’s most consistent and enduring institutions. They’ve come to define the genre, prolifically releasing albums and touring relentlessly. Their music is a world language, with the British band garnering dedicated audiences on practically every continent.

The Maiden fanbase can be obsessive to the point of zealotry, dissecting the nooks and crannies of every song and collecting the band’s T-shirts and records with fervor (the red Iron Maiden logo and their skeletal mascot, Eddie, remain timelessly metal). Better yet, the band feed the frenzy, continuing to serve the fans with new material and merchandise. If Maiden’s not making a record, they’re on tour. If they aren’t touring, they’re releasing a live album or filming epic music videos or documentaries. The Legacy of the Beast cannot be disputed, nor can the band’s intense work ethic.

Maiden would follow that up with Killers in 1981 before Di’Anno was replaced by ex-Samson singer Bruce Dickinson, with Harris, Burr, and guitarists Dave Murray and Adrian Smith rounding out the five piece. 1982’s The Number of the Beast introduced the epic songwriting and literary lyricism that would become the band’s trademark. It also provoked controversy with its hellish cover art, resulting in the cultural misconception that Iron Maiden and its fans were Satanists.

Drummer Nicko McBrain would replace Burr the same year The Number of the Beast was released, and more legendary albums would follow in the 1980s, as the band incorporated more progressive influences and dynamic production. Always savvy on the commercial end, Iron Maiden made to sure to cut a few widely heard singles (“The Trooper,” “Wasted Years”) for the casual headbanger while also delivering colossal full-length albums that play out with cinematic grandeur (Powerslave, Seventh Son of a Seventh Son).

Changes would affect the band beginning in 1990. Smith departed (to be replaced by Janick Gers) and Dickinson began a solo career, eventually exiting after 1992’s Fear of the Dark. British vocalist Blaze Bayley took over for two ill-fated LPs until Smith and Dickinson rejoined the group in 1999, unleashing the excellent comeback Brave New World in 2000. Gers remained alongside Murray and Smith, with the band now boasting a potent triple-guitar attack.

Since then, the band has released five more studio albums, the latest being 2021’s Senjutsu. It’s one of the most diverse Maiden records in years, often recalling the band’s ’80s material, and it got us thinking about the entire Iron Maiden discography. How do the albums measure up against one another? Take a trip through Maiden’s iconic discography below. 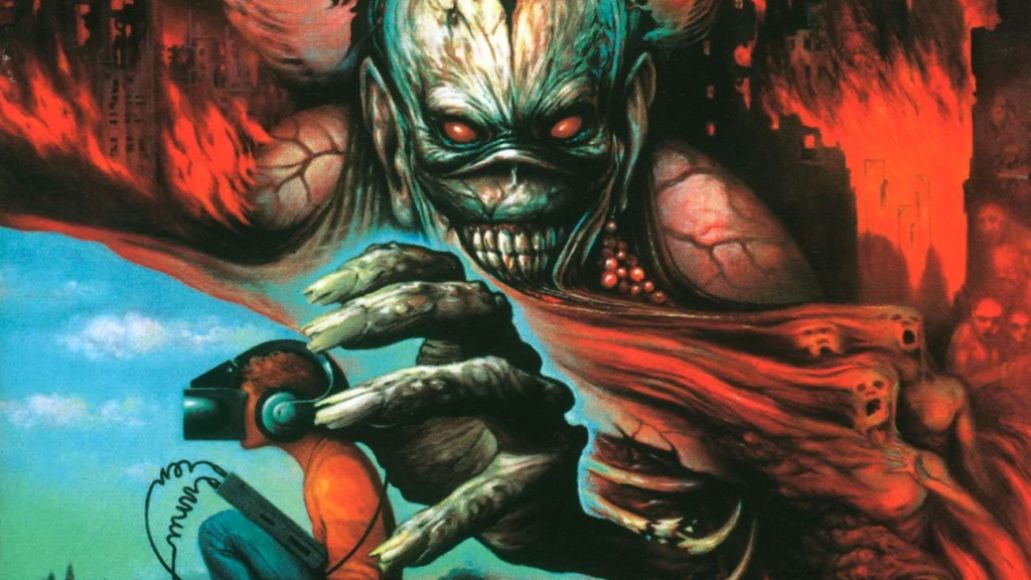 The Essence of the Beast (Analysis): The ’90s found Iron Maiden flailing. The band’s popularity started to plateau, due in no small part to the departures of vocalist Bruce Dickinson and guitarist Adrian Smith, not to mention the rise of grunge and nü metal. Though the group soldiered on, it was with increased desperation, attempting to court fresh fans via a video game (1999’s Ed Hunter) and lashing out at critics in “Virus,” a song recorded for a best-of compilation.

Then there was Maiden’s creative nadir: 1998’s Virtual XI. Working once again with former Wolfsbane vocalist Blaze Bayley, the band cranked out a sluggish and uninspired batch of material weighed down by strained lyrical metaphors and arrangements that mistake repetition for complexity.

Those musical choices feel redolent of peak CD-era hubris — an irresponsible mindset that convinced many artists to pad out their albums with lesser tunes, and, in Maiden’s case, unnecessarily epic material. Here, the band let the underwhelming “The Angel and the Gambler” and “Don’t Look to the Eyes of a Stranger” drag on and on and on, with Bayley endlessly repeating lyrical phrases to no logical end. Not even the occasional spark of guitar fireworks (the dueling solos on “The Educated Fool” are particularly heated) can pull this album from the brink of oblivion.

Hallowed Be Thy Tune (Best Song): Inspired by Mel Gibson’s 1995 opus Braveheart, “The Clansman” is founding member Steve Harris’ ode to Scotland’s fight for independence in the late 13th century. It’s the kind of fist-pumping triumphal epic that Maiden can do so well, and actually benefits from Bayley’s rigid vocal bark. This tune has the dual honor of being one of the only Bayley-era songs to remain in the band’s setlists after Dickinson’s return and being sampled by megaproducer Timbaland for R&B artist Brandy’s 2004 album Afrodisiac.

Wasted Minutes (Worst Song): For the better part of nearly 10 minutes, “The Angel and the Gambler” sticks in a dull groove of power chords and strained lyrics about addiction and risk-taking. Leaden enough for the first few minutes, the song is completely submerged as Bayley spends an interminable amount of time repeating the chorus at various volume levels. It’s a drag on the senses and, as it is the second track on Virtual, a bad omen for the rest of the album. — Robert Ham 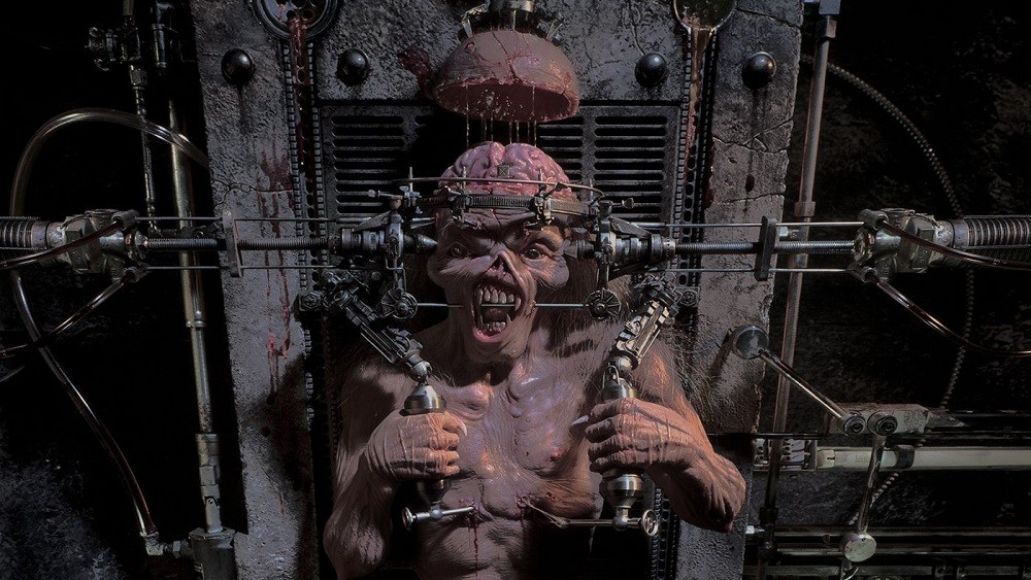 The Essence of the Beast: Iron Maiden’s 10th studio album, appropriately titled The X Factor, introduced Bayley as the new frontman in place of Dickinson, who had left to pursue his solo career.

Bayley was a bit of an unknown, hailing from an underground UK street metal act called Wolfsbane. For all intents and purposes, he fit the Maiden mold, despite a courser bark to his voice.

But the ’90s were a strange time for classic metal bands, and Iron Maiden weren’t spared. The tides were shifting toward more industrial and groove metal styles, away from traditional metal production and songwriting. Meanwhile, the band were in a creative bind of trying to sound recognizably like Iron Maiden without too much rehash or prog meanderings. Lacking the charismatic familiarity of Bruce Dickinson’s voice, Bayley-era Maiden fell into an identity crisis of sorts. Suddenly, one of the most influential metal band’s in the world sounded… kinda generic.

Hallowed Be Thy Tune: The 11-minute opener “Sign of the Cross” might sound sluggish and drawn out on an immediate cursory listen, but repeat plays unveil the moody masterpiece that lies within. Bayley’s vocals are rough yet passionate, and the guitar playing has an almost doom-metal voicing at times. The track opens to more prog turnarounds and fast shredding on the back half, as the arrangement careens through various tempos and segments. A reimagined version with Dickinson on vocals highlighted the band’s Rock in Rio live album — a testament to the song’s longevity and compositional integrity.

Wasted Minutes: If you heard “2 A.M.” without knowing it, you might just think that’s Bruce singing. Here, the band attempt to replicate the classic Maiden sound, but in doing so, expose the faults specific to the X albums. The energy and performances don’t stand up to those of a decade prior, made more obvious by the redundancy of the song. — Jon Hadusek

Pick up The X Factor here. 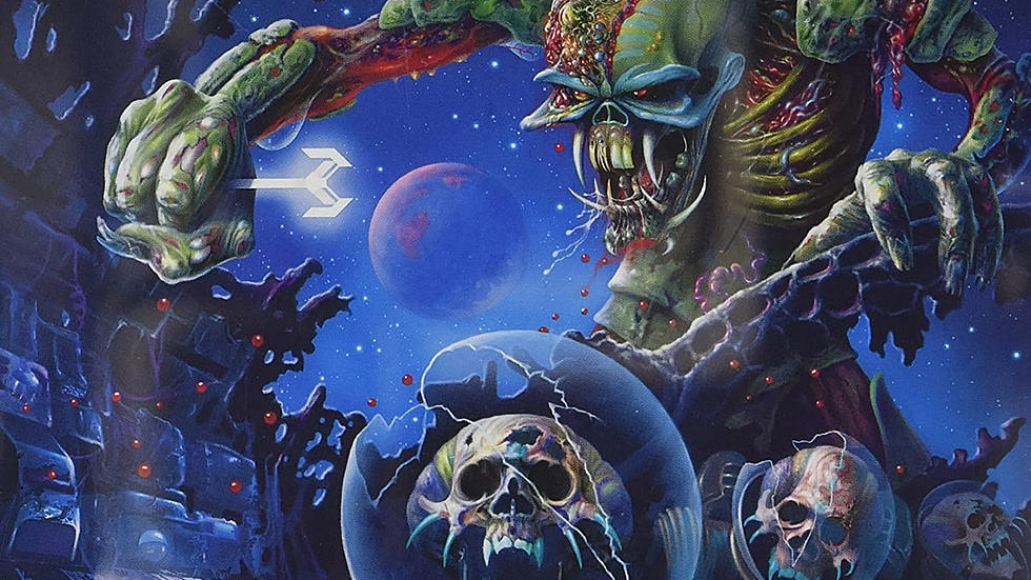 The Essence of the Beast: The rumor mills started churning soon after Iron Maiden announced the name of their 15th studio album: It was going to be the band’s last stand. Every detail pointed in that direction. It was called The Final Frontier and was packed solid with over 76 minutes of music. If Maiden was going to go out, they seemed to have every intention of doing so in a blaze of glory.

The reality was a little less dramatic. The finished album is a fascinating mess made up of some strong material surrounded by a ton of meandering arrangements, padded-out interludes, and some of the most pinched production in the group’s catalog.

The highs on Frontier are still fairly dizzying for a band that had been together for 35 years by that point. “Coming Home” and “The Alchemist” tear out of the gate with force and dynamism, and the epic closer “When the Wild Wind Blows” manages to not waste a single one of its 11 minutes. Elsewhere, though, Maiden settles into their modern formula of long quiet intros leading into heavy rockers and somewhat stodgy lyrics reflecting on Celtic myths, the plight of kings, and other leather-bound folderol. This is the product of a band at cruising altitude and taking no chances.

Hallowed Be Thy Tune: “The Alchemist” remains one of the more perfectly balanced songs in Maiden’s latter-day catalog. The music sets off on a steady gallop, set with swinging intention by McBrain and Harris, that gives the three guitarists plenty of room to harmonize and explode. It’s the perfect backdrop for Dickinson’s florid ode to John Dee, a 13th century mathematician and astronomer who also dabbled in sorcery and apparently tried to communicate with angels.

Wasted Minutes: The candlelight opening moments — an acoustic guitar melody and Dickinson’s folksy croon — should be enough to ward you off of “The Talisman.” But from that extended intro, the band cranks out a by-the-numbers prog-metal endurance test all about the plight of Old World refugees seeking a better life on other shores. The intentions of songwriters Harris and Gers are good, but they get lost in the sea shanty lyrics and musical dramatics. — Robert Ham

Pick up The Final Frontier here. 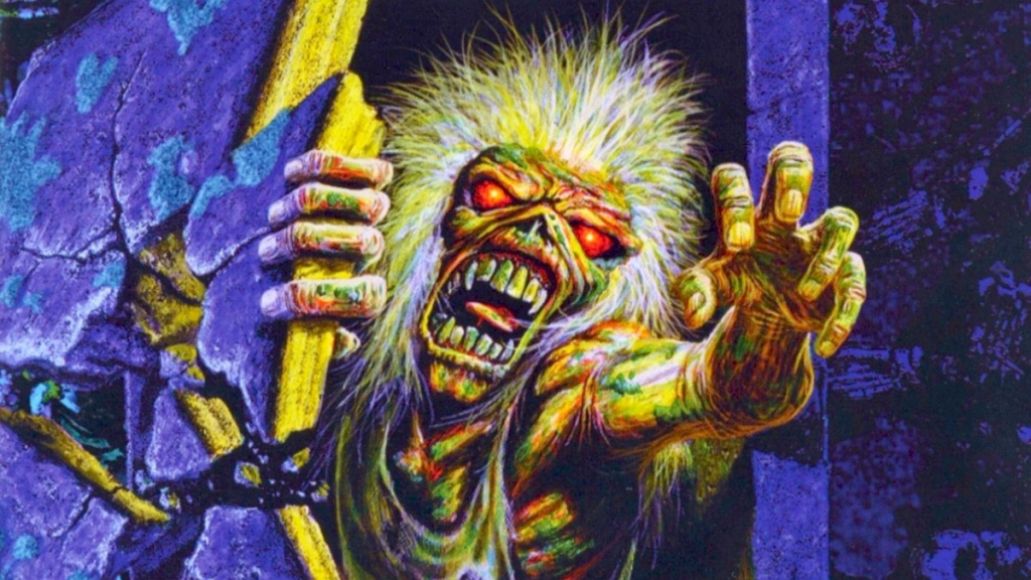 The Essence of the Beast: For most bands, a record like No Prayer for the Dying would be considered a solid effort. But that’s the problem with creating genre-defining classic albums — when you misstep, it’s blatant.

No Prayer was a glaring downgrade from Seventh Son of a Seventh Son. The clunky arrangements and corner-cutting production choices are perhaps more indicative of the somewhat faceless era of heavy metal that was 1990, but other exterior circumstances could have also influenced the creative process. At the time, Dickinson was working on his debut solo album, Tattooed Millionaire; Smith was replaced by Gers. One can assume some distractions naturally crept in, and after the amazing string of albums in the 1980s, some writer’s block or burnout wouldn’t be out of the question.

Hallowed Be Thy Tune: Opening track “Tailgunner” actually offers a bit of hope at the beginning of the album, kicking off like the bastard sequel to “Aces High.” Dickinson loves those aerial military combat stories, and he again conjures that imagery against the songs stadium chords and generally upbeat, melodic riffing.

Wasted Minutes: The bar band riffs and cowbell hits that open “Hooks in You” should be a fair warning for the clunker to come. True enough, there are no hooks here, only some forced gravely vocals from Bruce and a lackluster hard-rock pose. There’s a reason they haven’t played it since the 1991 tour. — Jon Hadusek

Pick up No Prayer for the Dying here.