“If this is the end, I want a boyfriend,” Lana Del Rey sings on “Black Bathing Suit,” one of the standout tracks on her eighth album, Blue Banisters. The pop balladeer has long mooned over romantic apocalypse, but with this collection, she gets to set explorations of doomed relationships against the backdrop of global crisis. At their best, Del Rey’s ruminations in an emergency extend her range on all levels — lyrics, vocals, dynamics, and candor.

Throughout her prolific, decade-long career, Del Rey has leaned into nostalgic fantasy with a faded silver-screen sheen — writing Gatsby cosplay, tragic Hollywood heroine apologias, and references to the unhinged end of the 1960s that make it sound like it happened yesterday. (Didn’t it?)

But on Blue Banisters, Del Rey weaves the relatable banal aspects of our present moment into her sad-chic tapestry. “Grenadine, quarantine, I like you a lot/ It’s L.A., ‘Hey’ on Zoom, Target parking lot,” she sings on “Black Bathing Suit,” before clever and moving lines about lockdown weight gain and the tension and comfort of insulation/isolation. The song opens with cawing crows and ultimately spins out with a ragged, black-humored call-and-response that wouldn’t be out of place on a Fiona Apple record. “The girls are runnin’ ’round in summer dresses/ With their masks off and it makes me so happy,” she later sighs on “Violets for Roses.”

Perhaps the tenor of the outside world finally matches the drama of Del Rey’s interior. Whatever inspired the shift, the inclusion of the current day has expanded the songwriter’s scope beyond obsessive straight romances and “sometimes submissive or passive roles” of women in those relationships (a source of much distress and discourse).

On tracks such as “Text Book,” “Blue Banisters,” and “Sweet Carolina,” Del Rey writes about complicated love relationships with her parents, sister and female friends, and finds compelling nuances in that material. On the outstanding title track, Del Rey narrates both the freshness and fear of breaking old patterns: “There’s a picture on the wall/ Of me on a John Deere/ Jenny handed me a beer/ Said, ‘How the hell did you get there?’/ Oh, Oklahoma…” She goes on to celebrate platonic support systems and her room of one’s own, pressing on both their solace and limitations.

At times, Del Rey’s myopia still inspires discomfort — or at least cringe. On “Text Book,” she reflects on daddy issues and an ex-love (“I was lookin’ for the father I wanted back”), but then inserts this clanger into the chorus: “And there we were, screamin’ ‘Black Lives Matter’ in the crowd… and I saw you saw who I am.”

Are these lines a continuation of Del Rey’s social media posts about racial justice and media, in which her tone is sometimes defensive, sometimes aggressive, but always that of a perceived victim? She has faced criticism for seeming to present a vision of fragile, white-washed feminism that is, at best, stagnant and, at worst, actively harmful.

But when the chorus continues, “All the things I couldn’t wish for him/ I screamed for them,” her tone is as blurry as ever — is she oblivious to her short-sightedness or pointing to it? Are these sentiments subversive or counterproductive?

Similarly, on “Beautiful,” Del Rey defends her depressive creative process — and in the process, compares herself to Pablo Picasso. “What if someone had asked Picasso not to be sad?” she sings, “There would be no ‘Blue Period’/ Let me run with the wolves, let me do what I do.” Is this self-aggrandizement or a self-own?

In terms of album curation, Del Rey seems comfortable with mixing up past and present expressions and experiments. Blue Banisters is her second full-length of 2021 after Chemtrails Over the Country Club. That album and the previous release, 2019’s Grammy-nominated Norman Fucking Rockwell!, were produced by Jack Antonoff, who sat out this round.

Instead, Blue Banisters includes recent compositions with collaborators Drew Erickson, Gabe Simon, and Zach Dawes, as well as a hodge-podge of songs that have been floating around the Del Rey fan community for years. Nearly a third of the songs date back to sessions for 2014’s Ultraviolence and were co-written with former partner Barrie-James O’Neill.

Another two tracks are salvaged from a scrapped collaborative album circa 2017 with British musician Miles Kane (of Last Shadow Puppets), whose uncredited vocals are front and center on “Dealer.” This down-tempo psych-rock jam teeters between hilarity and delirium, and Del Rey gets to let loose rare aspects of her voice — wailing, yelping, rebuking, mercilessly taunting. “People don’t know what it sounds like when I yell,” she told Interview about the song, “and I do yell.”

But the songs with Kane are exciting outliers. Most of the tracks stick to Del Rey’s preferred cinematic piano, delicately plucked guitars, breathy background vocals and her throaty croons front and center in the ear. This collection could have sounded like a disjointed scrapbook, yet its tonal and thematic cohesion are proof of the constancy of Del Rey’s vision.

While her contemporaries recently released albums marking stark swerves — Lorde with her sunny, post-depression satire, and Halsey with their spectral, industrial reclamation — Del Rey remains monogamous to her themes: her West Coast American Gothic, her mash-up of trashy glamour, her doe-eyed “bad girls,” her many shades of blue.

“Do you think if I go blonde, we could get our old love back?” Del Rey sings on “Text Book,” offering a masterful twist on lines from both Bob Dylan’s “Tangled Up in Blue” and Frank O’Hara’s “Meditations in an Emergency.” These days, however, most of us have long given up or rejected the illusion of “going back” or accepting whatever “normal” was.

However impressive Del Rey’s allegiance to her own obsessions — and an artist must be obsessed — the accumulation of these ideas can become monochromatic, meandering, and repetitive; apt background music for loitering in the bath. The most pleasurable and moving, even unsettling, moments on Blue Banisters arrive when Del Rey breaches, however gently, her own boundaries. 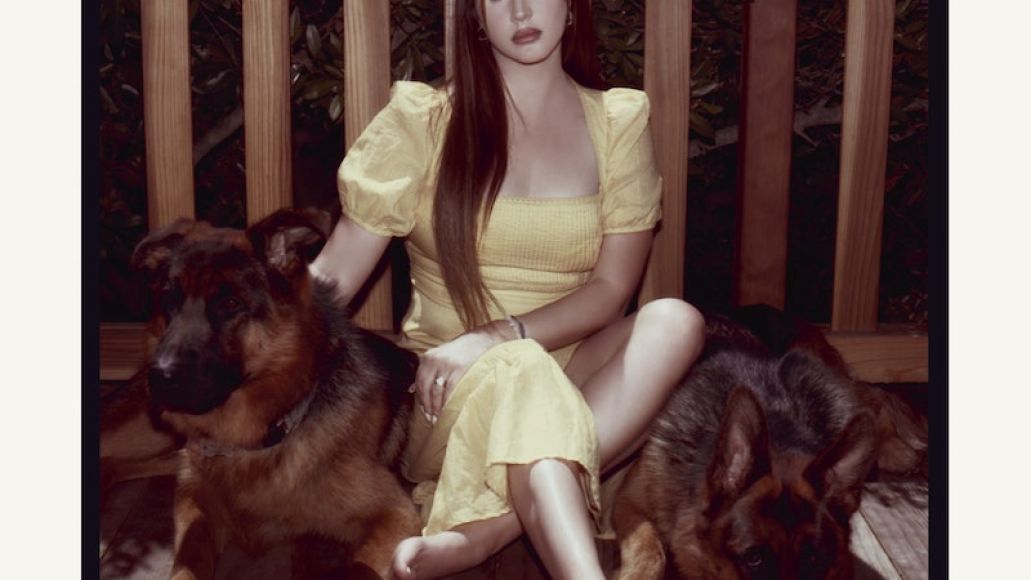