A viral TikTok video of a high school marching band drummer performing inside a gyroscope has impressed the master of stunt drumming, Tommy Lee. The Mötley Crüe drummer has praised the young musician for “refusing to play drums the way they were intended to be played!”

A TikTok user by the name of Meredith Sanders posted the clip on Monday. The video, which has racked up 7.5 million views as of this posting, shows a young woman named Kenzie Conner playing drums in the Westfield High School marching band in Virginia while spinning around in a giant gyroscope, with AC/DC’s “Thunderstruck” providing the soundtrack.

We here at Consequence shared the video on our Instagram, where Tommy Lee commented, “Hahahahah!!! Yes….Another man refusing to play drums the way they were intended to be played!!!”

The video is shot from a long distance, so Tommy can be forgiven for writing “man.”

After posting the clip with the AC/DC song, Sanders was prompted to share it with the original sound, which featured her screaming in excitement. Funny enough, she was also asked to post it with Mötley Crüe music, and obliged, using “Dr. Feelgood.”

Lee, of course, is known for his daredevil drumming at Mötley Crüe shows, including his drum coaster that sends him in a full 360-degree circle, with him performing upside-down at the top of the rotation.

Next year, fans should be able to see Lee and the Crüe playing their long awaited reunion tour, which has been postponed twice due to the pandemic. The band will head out on a co-headlining stadium outing with Def Leppard in June 2022, with tickets available here.

See all three versions (AC/DC sound, original sound, and Mötley Crüe sound) of the marching band stunt below, as well as a screenshot of Tommy Lee’s comment.

Can’t watch the TikTok videos below on your device? Watch here. 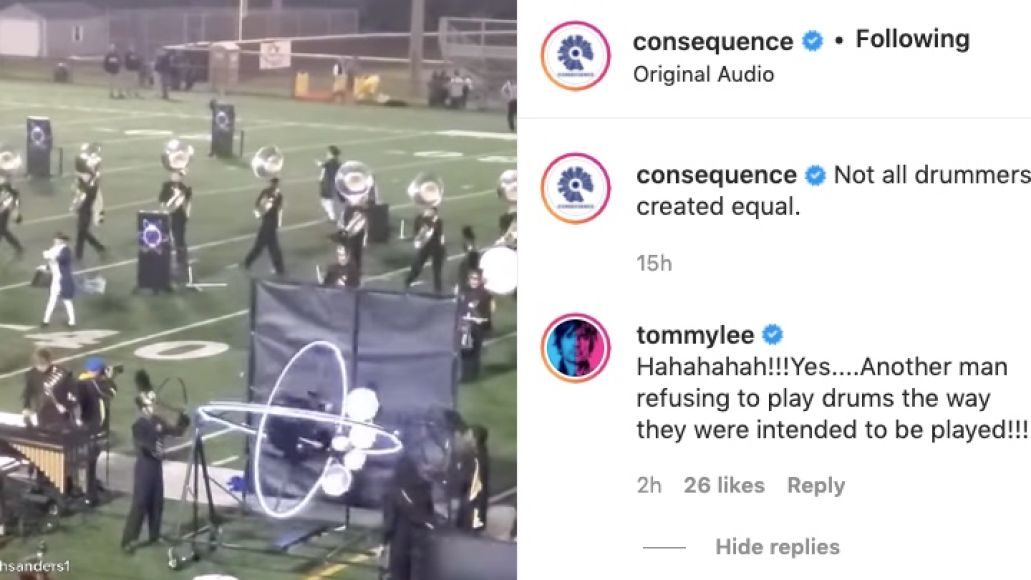