The Pitch: The last official judicial duel in French history fell on December 29th, 1386, when Sir Jean de Carrouges (Matt Damon) challenged squire Jacques Le Gris (Adam Driver) to a duel to the death on horseback. The charge? The rape of de Carrouges’ wife, Marguerite (Jodie Comer) while de Carrouges was away to collect much-needed recompense for his knightly duties.

But what truly happened that day? And what other motivations lie behind the declaration of a duel? What seems like the defense of a woman’s honor at first glance gives way to broader examinations of courtly pride and spurned friendship, not to mention male entitlement to land, honor, and women’s bodies. Prince of Thieves this ain’t.

A Knight’s Rattail: Nobody does it quite like Ridley Scott, who’s juggled Serious Historical Epics like Gladiator and Kingdom of Heaven with as much flexibility and alacrity as slicker, more irreverent works like Matchstick Men. The Last Duel, for all its medieval pomp and circumstance, plays in all of these areas and more, and somehow comes out the other side as insightful about men’s historical (and continued) barbarism towards women as it is winkingly knowing about its period goofiness. 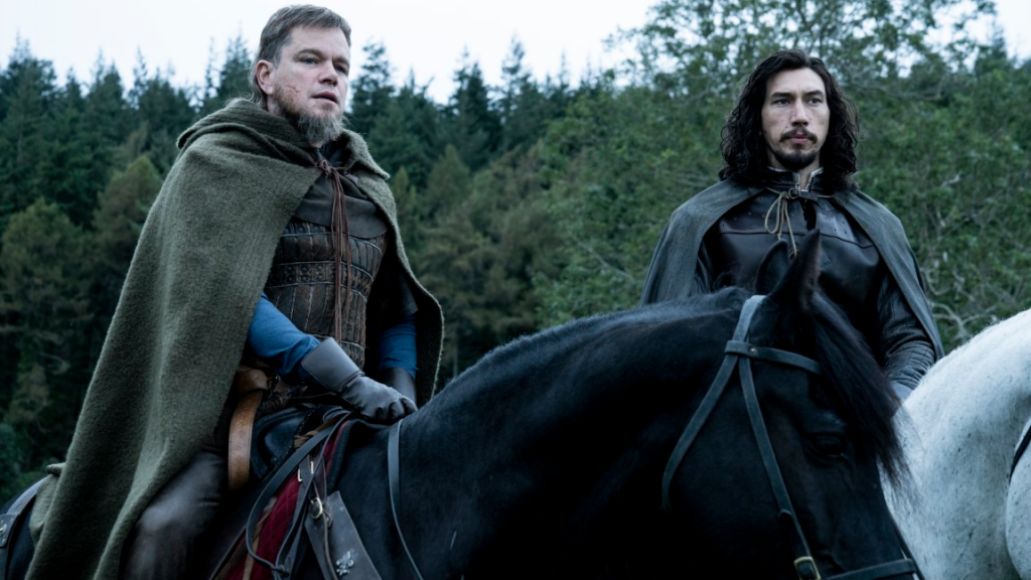 The script, penned by Can You Ever Forgive Me? scribe Nicole Holofcener alongside Damon and Ben Affleck (we’ll get to him), splits its three-pronged tale of the circumstances behind the duel into acts centered around each of our protagonists. First, by necessity, is “The Truth According to Jean de Carrouges,” follows Damon’s brutish knight, a frowny, humorless man with a winding scar nearly as distracting as his freshly-shorn mullet and Fred Durst beard. (He looks at any moment like he’s ready to ditch the Crusades for Ye Olde Tractore Pull.)

It’s best we start with Damon, since his blinkered perspective on events allows us to get the basic gist before complicating his vision of the truth as we see it from other sides of the prism. In his eyes, he’s a valiant hero, robbed of the lands and titles he is owed by the king and the foppish Count Pierre d’Alencon (Affleck, sporting a bleach-blonde pageboy haircut). Le Gris, a man he once considered a friend, sides with Pierre and, as his wife later tells him, rapes her in his home. With upturned chin and valiant declarations, he vows justice for her name.

You Should See the Other Guy: For the first 45 minutes, The Last Duel feels like a miscalculated, warmed-over sword-and-blood drama through the ridiculous hair and Dariusz Wolski’s overcast cinematography. But starting with the second act, when we see “The truth according to Jacques Le Gris,” The Last Duel really gets its blood flowing. The same events are re-contextualized from Jacques’ perspective; now, we see Jean de Carrouges as a half-witted loser, flailing for self-importance and only getting it by dint of his skill in battle (which Scott renders with brief, but bloody intensity early on).

Jacques, meanwhile, is a romantic libertine, his tall stature and good looks — I mean, it’s Adam Driver, after all — getting him no share of female attention. His growing friendship with the equally hedonistic Pierre spurs him on; we get plenty of Affleck’s thick slice of Honey Baked Ham here, thee and thou-ing his way through bedroom foursomes and idiosyncratically modern dialogue (“This fucking guy!” he whines of de Carrouges at one point).

Of course, Jacques’ eye turns to Marguerite, his lust clearly colored by his romantic yearnings for her. We see the eventual encounter, and while it’s still unambiguously a rape, the scene’s point of view shows us the way Jacques (and many men before and after him) can romanticize even such a horrid act as an act of brazen, bold romance. 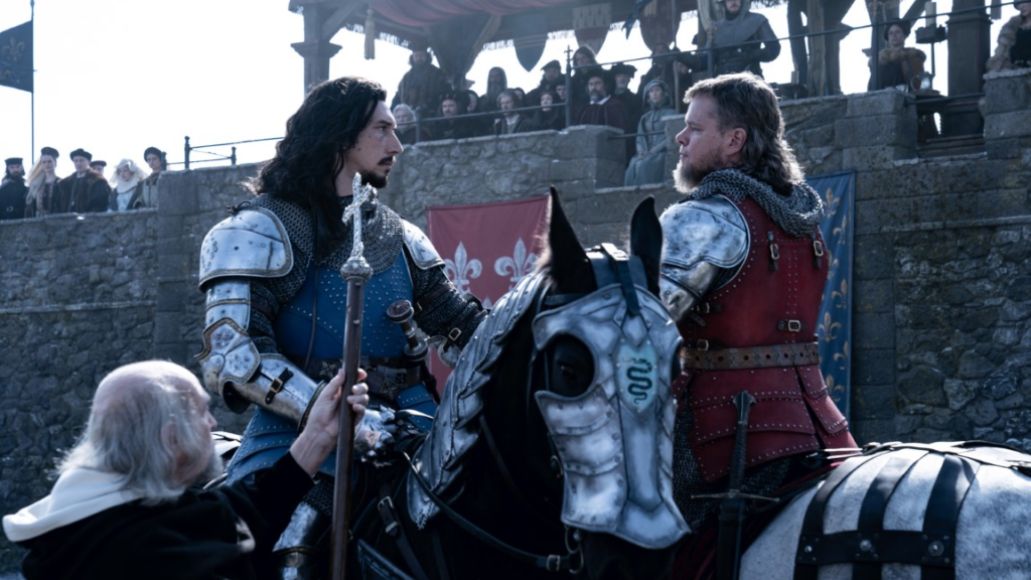 The Passion of Jodie Comer: But once we’ve all had our fun with the goofy hair and the disturbingly modern, ’90s-era performances from American actors playing Frenchmen with nary a change to their native accents, The Last Duel brings the hammer down with a third act that places the historical patriarchy on display into sharp relief. “The Truth According to Marguerite de Carrouges” (the words ‘the truth’ linger a little longer this time before vanishing) is the real punchline to Scott, Holofcener, Damon, and Affleck’s long-form bait-and-switch.

Here, Marguerite’s sheer powerlessness is laid bare, as she’s forced to demure and soothe the egos of two men who want to possess her. De Carrouges is no longer her savior, but her captor; Le Gris isn’t her liberator, but her attacker. And, as she depressingly comes to learn, the whole of 14th-century French society is against her. That goes double for the church, that’s set to burn her at the stake for giving false confession at Jacques’ trial if the duel doesn’t turn in Jean’s favor (since, after all, the outcome of the duel will prove the truth as an extension of God’s will). Comer carries this act on her back, a truly breakout performance filled with expressive glances and barely-contained restraint.

The Verdict: Lurking underneath the grim wit and modernist camp of The Last Duel is a surprisingly effective treatise on the ways rape culture has persisted throughout millennia. As Comer’s Marguerite learns, there’s simply no safe, easy, consistently successful way for women to seek justice in the wake of sexual assault, a truth as horribly applicable today as the Middle Ages. Men will deny what they’ve done (Affleck utters the phrase ‘deny, deny, deny’ in ways depressingly reminiscent of more recent powerful men accused of rape), and the state will back them up to maintain the status quo.

What’s worse, these same men will deny it to themselves, even up to their dying breath; The Last Duel, if anything, is a testament to male self-delusion and self-mythologizing, and the impact it has on the women around them.

That it manages to pack such a hard-hitting message into a film that also happens to treat us to Ben Affleck in tights saying “Come in! Take your pants off!”, alongside a blood-soaked bro fight for the ages in the film’s final minutes, is testament to Scott’s staying power as a filmmaker. It may not be the most complicated, hard-hitting stuff, but it absolutely succeeds in walking its delicate tightrope of tones. If House of Gucci is half as successful, 2021 might just be salvageable.

Where’s It Playing? The Last Duel slicks back its medieval mullet and jousts its way into theaters October 15th.