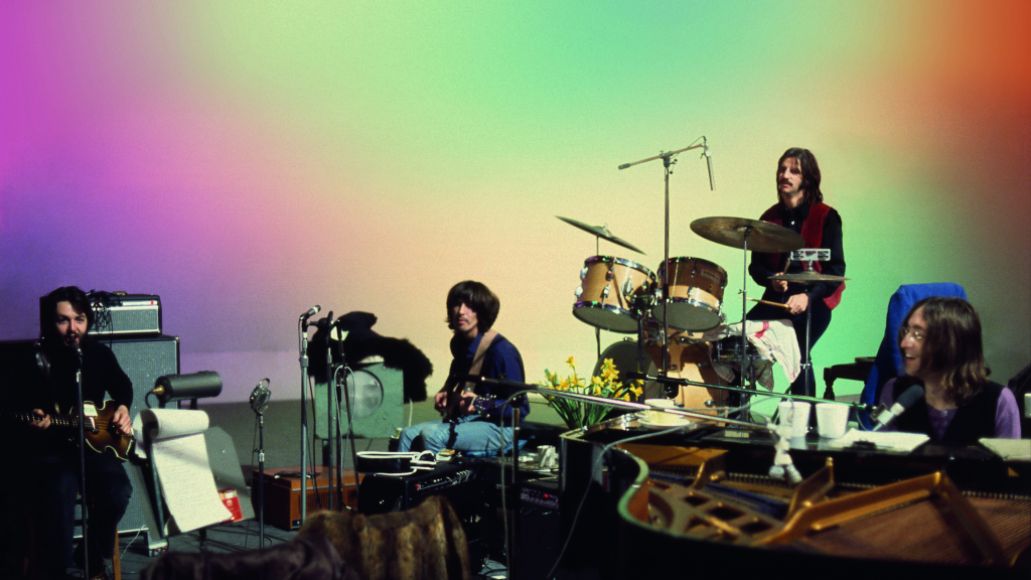 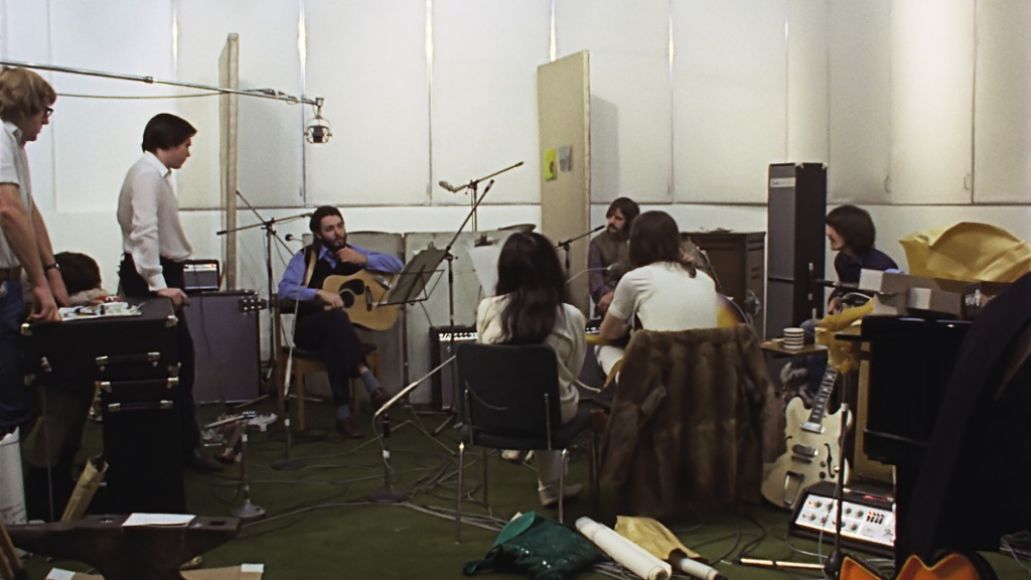 There’s a visceral glee in hearing John, Paul, and the rest break songs like “Two of Us” and “Don’t Let Me Down,” like watching a very stoned Michaelangelo paint the Sistene Chapel. They sing fill-in lyrics like, “Haunts me like a cauliflower,” or break the monotony to thrum through old classics of theirs (or other songs of the time they love from Bob Dylan and James Brown). In real-time, we get to watch Paul strum away idly on a guitar until, like chipping away at a piece of marble, he begins coming away with the central riff of “Get Back.”

It’s in these moments that all the tensions and arguments fade away and they reconnect with why they did this in the first place: the music. Jackson understands that these are the real gold nuggets he’s panned for in all this footage, restoring it to a vivid 4k life thanks to similar restoration techniques he used for his stellar WWI doc They Shall Not Grow Old. It’s remarkable to look at, even as the limitations of Lindsay-Hogg’s 16mm footage (acknowledged on-camera by Paul) led Jackson to tinker a bit too much with the old footage.

This leaves the proceedings looking somewhat smoothed out and fuzzy, like we’re watching deepfakes of the band superimposed on someone else. Still, the sound has been impeccably revived, and every new outtake of a classic Beatles track feels like Jackson recovering some kind of lost artifact.

Helter Skelter: But for as meditative, monotonous, and oftentimes repetitive as the studio sessions can be (you’ll get sick of “Two of Us” no matter how many funny voices Paul and John spin on it), Get Back rewards patient viewers with that unforgettable rooftop concert. It’s here that Jackson’s filmmaking opens up even further, veering from literalized documentation to a thrilling, split-screen ticking-clock thriller as the police attempt to make their way to the rooftop to stop the Beatles from disturbing the peace.

Jackson’s longtime editor Jabez Olssen has a blast dashing from the band’s verve-filled renditions on the roof, to the farcical attempts by the bobbies to get past Apple security, to man-on-the-street interviews during the concert that range from giddy schoolgirls to surly hausfraus (“It woke me up from my sleep and I don’t like it!”).

It’s cut almost like an action sequence, injecting some much-needed excitement into an event we all know is a foregone conclusion. But in Jackson and Olssen’s hands, it feels like an incredible heist our plucky heroes have just barely pulled off.

The Verdict: Honestly, Thanksgiving Day is likely the perfect release date for The Beatles: Get Back. It’s an eight-hour vibe session of joy and tedium in equal measure, one you can throw on in the background as you prepare your turkey dinner and drift in and out of as your heavy eyelids flutter with all the reverie of a tryptophan nap.

It’s less boring than it is relaxed, Jackson keeping us as flies on the wall for every step of the hypnotic process of creativity. There’s no need to keep rapt attention to all eight hours of it in one go; it’s best served by drifting in and out of its charming comforts, soaking in the proximity of pop music’s greatest titans in some of their most intimate moments together.

Watch Paul McCartney and Rick Rubin Vibe Out in the Studio in New McCartney 3,2,1 Clip: Exclusive

The Beatles: Get Back is as much archaeology as it is cinema, a docuseries committed not just to showing us new moments of the band that we’ve never seen before, but to crafting a broader picture of their oft-controversial dynamic. We’ve long had a picture of late-period Beatles as a quartet of squabbling, drug-addled egotists whose self-regard (along with the interference of an abrasive interloper in the form of Yoko) broke up one of the greatest bands in the world.

But in Get Back, the Beatles laugh off accusations of their animosity, giggling at headlines from The Daily Sketch’s Michael Housego that John and George had come to blows. Yes, they’d grown apart, and their priorities differed, and they’re more honest about their creative differences. But when it comes time to sit in a room together and just play, it’s like they never left those early gigs in Hamburg. And that’s the true treasure Jackson unlocks.

Where’s It Playing? The Beatles: Get Back takes the long and winding road to Disney+ just in time for turkey dinner in the States, November 25th.