On Sunday (November 14th), the embattled rapper DaBaby got into a messy fight with singer and rapper DaniLeigh — the mother of his youngest child — that was streamed on Instagram Live. After he called the police on her, the two artists traded posts on their Instagram Stories giving their sides on the unfortunate situation.

Based on a lengthy statement posted by DaBaby that he closed out by promoting his upcoming tour and recent EP, Back On My Baby Jesus Sh!t AGAIN, it doesn’t appear that anyone was detained by the police.

“I would like to swiftly remove myself from any of the ‘hostile’ behavior put on display moments ago, this here thing has gone far enough for shawty to crash out on her own and it saddens me because I still got a queen to raise,” he wrote on his Instagram Story. “This last hour has been documented for my safety and business done based on my reputation. With multiple threats of setting up a internet scheme & a person refusing to not let me go me and somebody else here knew to record her.”

He continued, “I done been beat on and yelled at and chased around like one [of] them fatal love attraction type girls. But I knew to keep it together… End of the day no big deal I don’t want no charges pressed or nothing I just want her peacefully removed… My focus right now is solely on this new project and this LiveShowKillaTour starting Nov. 26th. Hate shawty went out that way but that ain’t my business I’m a father first always, and always will be.”

“This really me typing too no PR,” he made sure to clarify at the end of the statement. Check out a screenshot below, followed by a post from The Shade Room gathering relevant social media clips.

In response, DaniLeigh explained she and DaBaby had been living together for the past three months since their child was born. The 26-year-old artist claimed the incident captured on Instagram Live occurred when DaBaby told her she needed to leave his house after she had cooked him dinner.

She also rightfully called out DaBaby’s “lame ass” for using the situation to promote his latest project and tour. Apparently, the North Carolina rapper wrote the EP’s “Levels” and “Sticked Up” about her.

The aftermath has continued to play out on social media, with DaBaby jokingly comparing it to the movies A Thin Line Between Love and Hate and Get Out. The mother of his eldest daughter has even been added to the mix.

Consequence has reached out to DaBaby’s representatives for comment.

Earlier this month, DaBaby announced a 20-date trek backed by Rolling Loud, the live music brand best known for its hip-hop festivals, and followed up with the aforementioned Back On My Baby Jesus Sh!t AGAIN this past Friday (November 12th).

In a statement defending DaBaby, the company said, “Rolling Loud supports second chances and we believe DaBaby has grown and learned from his experience. Everyone is welcome and we look forward to DaBaby’s fans seeing him live.”

He followed up with a series of insincere apologies and retractions, but was later praised for being “genuinely engaged” during a virtual meeting with leaders from several H.I.V. organizations in late August. DaBaby later returned to the Rolling Loud stage during Halloween weekend, when he was brought on stage during 50 Cent’s headlining set in New York City. 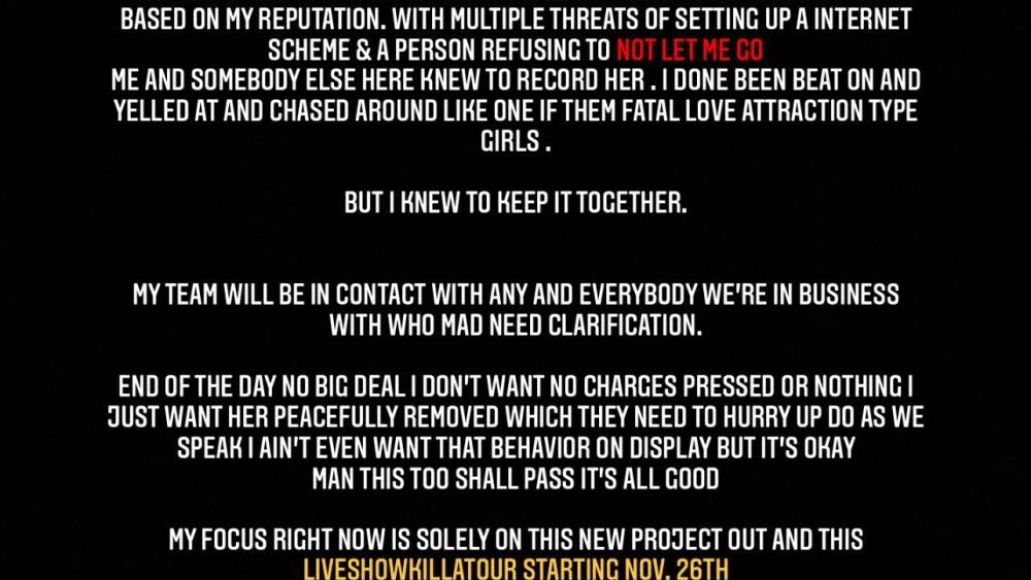 DaBaby Promotes Tour and EP After Calling Police on His Baby's Mother, Who Is Now Facing Assault Charges