“I performed on this stage when I was nine years old,” said H.E.R. on Tuesday, November 2nd, as she reached the bridge of her second song, “I Can Have It All.”

She was referring to performing on a kids’ version of Showtime at the Apollo, a famed variety show at the iconic NYC theater, after her mom submitted a tape to the show back in the day.

“My parents put on a fundraiser to pay for the flights to get us to New York City,” she continued. It all worked out, H.E.R. sang “Freeway of Love” by Aretha Franklin on the show, and the rest is history. 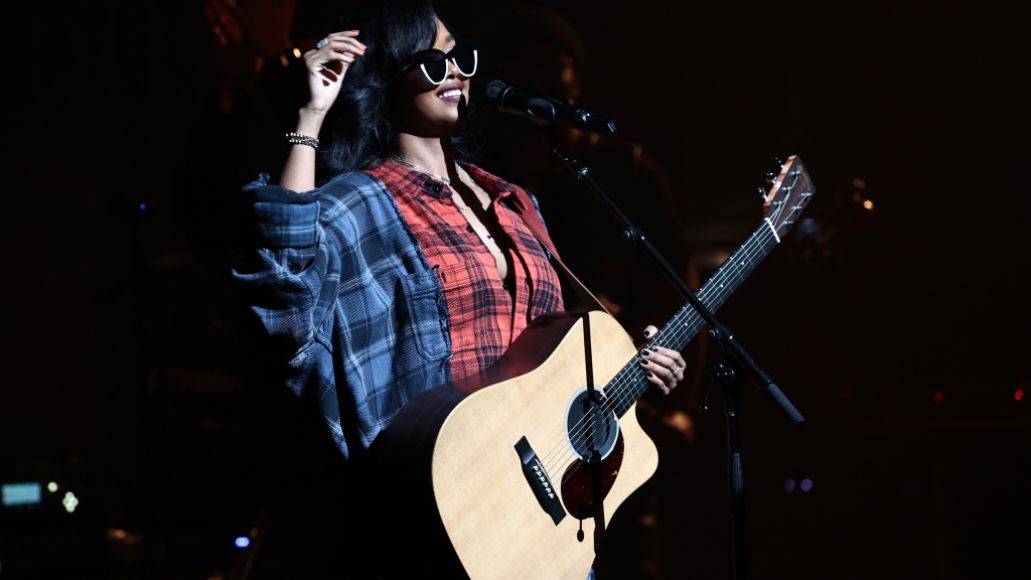 All that is to say, last night was a full circle moment for H.E.R. The wildly talented R&B artist performed for SiriusXM and Pandora’s new Small Stage Series, which allows fans across the globe to hear intimate shows from their favorite artists. And though it was intimate in a Broadway-style setting (as opposed to huge arenas and theaters, which she is now capable of selling out), H.E.R. was seemingly effortless during the special Apollo gig, breezing through her many hits with a career-spanning setlist.

Career-spanning is a bit tricky for H.E.R., as she’s only been releasing music for 5 years — but in that time, she’s released five EPs, two compilation albums, one full-length album. She’s won an Academy Award for Best Original Song, and a Grammy for Song of the Year. Needless to say, her ascent to stardom has been swift, and all of it is due to her mastermind approach to music.

Her live show is no different — H.E.R. was playing every instrument last night, from keys and guitar to bass and drums. This was not an anomaly; she is an absolute virtuoso on multiple instruments, and she very consciously expands her R&B sound to include much more than just synth pads and 808s.