The Pitch: Pam (Ellie Kemper) and Jeff Fritzovski (Rob Delaney) are two down-on-their-luck parents forced to put their house on the market after the economy puts Jeff out of a job. But hope springs again when Jeff discovers a priceless heirloom his mother left him, a deformed porcelain doll worth $200,000; it might just be enough to keep their family in the home they love.

There’s just one problem: the doll goes missing the day after their open house, and the likely culprit is Max Mercer (Jojo Rabbit‘s Archie Yates), a precocious 10-year-old English boy. Determined to sneak into Max’s house and steal the doll back, the Fritzovskis decide to pull a little Wet Bandits action. But Max, having been left behind after the rest of his family — including his mother (Aisling Bea) — fly off to Tokyo for Christmas vacation, chooses to stand his ground and show these prospective intruders what horrible designs his little mind can conjure.

You Can Never Go Home (Alone) Again: Despite what you may think, the Home Alone premise is slightly more durable than its Macaulay Culkin-centered reputation would suggest: in fact, Home Sweet Home Alone is the sixth movie in the franchise to date. But while it’s probably got some of the best production value since the last theatrically-released entry in the series (1997’s Home Alone 3), and is replete with a cast of genuinely funny actors, there’s something rotten at the core of Home Sweet Home Alone that makes it harder to swallow than a pool ball to the kisser.

The script, by Saturday Night Live vets Mikey Day and Streeter Seidell, feels like a parodic sketch of the series drawn out to feature length — the kind of idea they’d spin out one long night in the SNL writers’ room, before realizing they could just turn it into an actual movie. And it’s not a bad one in theory: What if a Home Alone movie placed us firmly in the perspectives of the crooks, who had a good, sympathetic reason to break into the kid protagonist’s house?

To their credit, Kemper and Delaney, both brilliant comic actors, lean into the farce with entertaining elan in the first half. (Kemper, in particular, remains an expert at the kind of confident guilelessness that made Kimmy Schmidt so appealing, and she’s an incredible physical comedian.) There’s something bittersweet about their dynamic, and the first half works mostly by virtue of tracking their reluctant dipping of toes into the world of petty crime: they Google whether their plan constitutes a felony or a misdemeanor and Jeff frets about being put in “gen pop”: “That’s where all the young fishes get got.”

But the problem is they’re too good at making you root for them; all they want is this doll they don’t even know for sure Max has, and they’re hardly ever in a position (or mindset) to do him any actual harm. 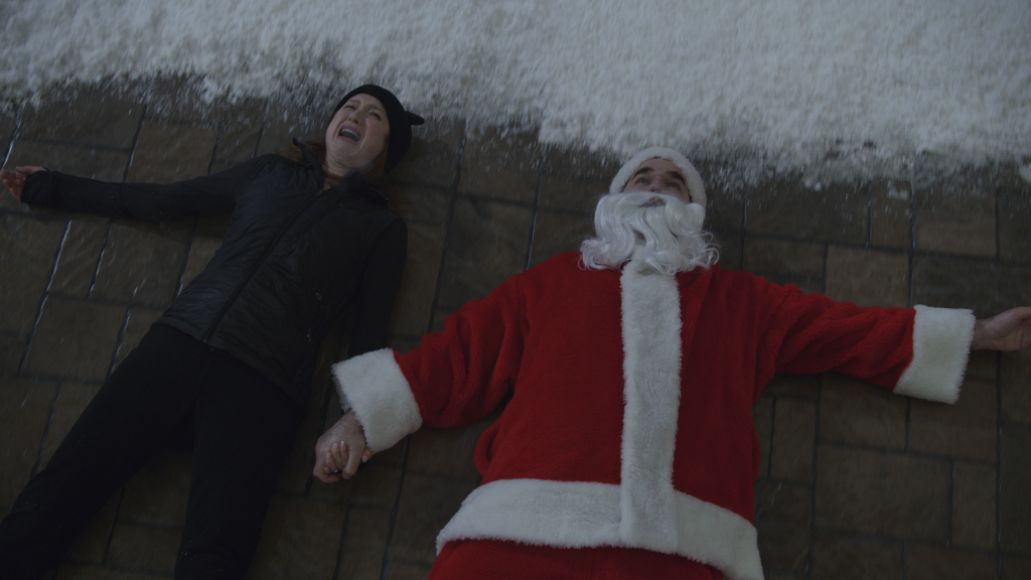 We Need to Talk About Kevin (McCallister): This brings us to the beastly Brit at the film’s center — Max Mercer, a sadistic tyrant whose apple cheeks and squeaky English accent mask an ink-black heart. To his credit, Yates is next-level adorable, just like he was as the sole bright spot of Jojo Rabbit. Day and Seidell’s script is most clever when selling us on Mercer’s deadpan sarcasm, the quality he shares most with Culkin’s Kevin McCallister. But by the time the stakes simmer to a boil, and he’s putting the house in siege mode by icing up the driveway and buttering the stairs, it all feels a bit too far, and Max takes an almost perverse, homicidal glee in every blow he lands on these unsuspecting, desperate people.

If they’d committed wholeheartedly to making Max the villain of the piece, you could actually have something here. Instead, Max’s just a cute, confused, and scared kid whose reign of terror (and the Fritzovskis’ own plans) is predicated on a farcical misunderstanding so transparent it makes the whole thing feel fruitless.

Plus, the traps aren’t nearly as clever or out there as I would have hoped: thumbtack-tipped Nerf darts and pool balls fired from T-shirt cannons are pretty neat, but the ones that work best are the simple gags like slippery driveways and motion-sensor lights. It’s all a bit numbing after a while, compounded by Borat Subsequent Moviefilm and Dirty Grandpa director Dan Mazer’s flat, workmanlike direction.

Stand Your Ground: What’s more, Home Sweet Home Alone sees fit to waste time on a cavalcade of supporting characters who have next to nothing to do. Pete Holmes and Chris Parnell turn up in all-too-brief roles as harried and clueless in-laws, and Kenan Thompson sleepwalks through his role as the Fritzovski’s overly-involved realtor.

Also, Veep‘s Timothy Simons shows up as Jeff’s smarmy, more successful brother, whose dismissiveness drives him even more to criminal behavior. In a flimsy bid to tie this to the original movie, Devin Ratray returns as Buzz, now a slovenly Winnetka cop still stewing about the first film’s events. He’s only in a couple of scenes and disappears completely before the real action starts. Use him, damn it!