Metallica are turning their 40th anniversary into a complete takeover of San Francisco, unveiling a series of events coinciding with their previously announced December arena shows at the city’s Chase Center. A number of club gigs featuring bands related to Metallica (in some cases, literally related), as well as gallery shows, book signings, film screenings, and more will take place over the course of a few days next month.

Of course, the main events are Metallica’s two shows at the Chase Center on December 17th and 19th. Ten years ago, the band commemorated their 30th anniversary with a series of shows at the Fillmore that featured past members of the group (including Dave Mustaine and Jason Newsted), as well as a number of metal luminaries. Hopefully, there will be lots of surprises in store for the Chase Center shows (limited tickets available here).

On the 17th, The Wedding Band (a covers act featuring Metallica’s Kirk Hammett and Robert Trujillo) will play the Fillmore (presumably after the Chase Center concert). In addition, that bill will feature Goodnight, Texas (also on The Metallica Blacklist) and Bastardane.

The 18th is the most jam-packed day, including a few daytime events celebrating Ross Halfin’s photobook Metallica: The Black Album in Black & White — among them a gallery show featuring Halfin’s photos, a book signing, and a Q&A. A Film Fest will also take place a the AMC Kabuki and include a screening of the Cliff Burton tribute home video Cliff ‘Em All, among other works.

The nighttime of the 18th will include three different club shows. One at The Chapel will be a big family affair. The aforementioned Taipei Houson featuring Lars’ sons will play their second gig of the celebration, but this time they’ll be joined by OTTTO, featuring Trujillo’s son Tye. Bastardane will be on that bill, as well. Over at Bimbo’s 365 Club, three Metallica tribute bands — Damage Inc, MotorBreath, and Sandman — will perform. And a third show at August Hall will feature Metallica Blacklist contributor Kamasi Washington along with DJ Dials.

Ticket links for each of the events are posted at Metallica.com, with tickets for The Wedding Band (featuring Hammett and Trujillo) available via Ticketmaster.

See a poster for all of the aforementioned “Metallica San Francisco Takeover” events below. 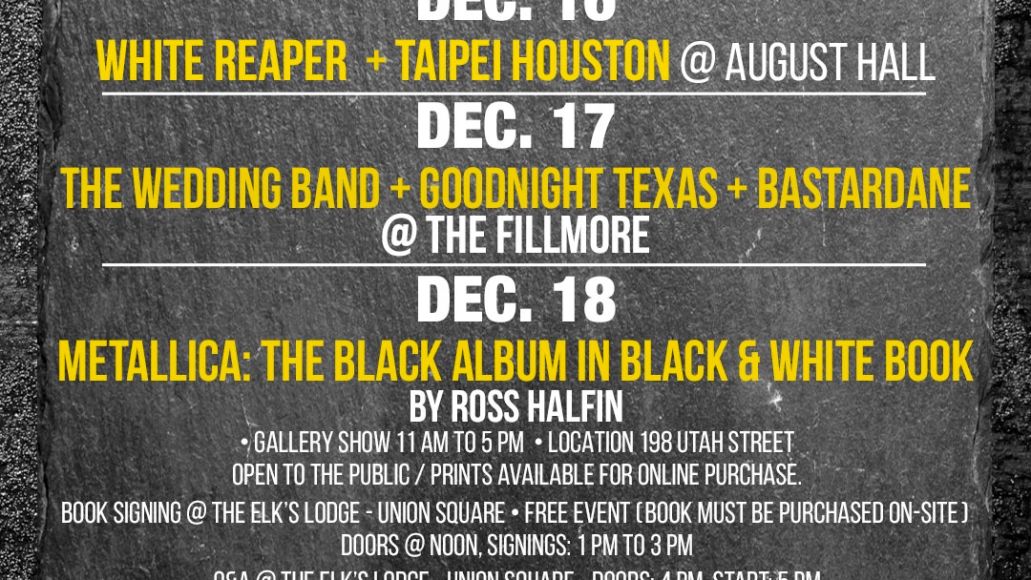