“Do not continue anything in my name if I die. You got this on record,” Tyler, the Creator told XXL in October 2021. “If I ever die, I don’t want people to put my music out… [with] features with people I do not fuck with. The companies are over with. Everything’s done.”

Amid a continuous tide of posthumous releases, where quality and quantity battle against each other in the streaming era, that sentiment is becoming louder. In fact, Tyler’s fellow Californian Anderson .Paak went as far as to tattoo his perspective across his right forearm back in August: “When I’m gone, please don’t release any posthumous albums or songs with my name attached. Those were just demos and never intended to be heard by the public.”

Tyler and .Paak are two of the more outspoken artists on this increasingly common practice; otherwise, it’s largely the fans who aren’t afraid to make their opinions heard. Then there are the label executives, who think they’re doing fans a service by providing closure and continuing an artist’s legacy — or at least, they’d like it to come off that way.

In 2021 alone, several posthumous projects have been released in rapid succession, with some labels only just waiting for the ink on the obituaries to dry.

Barely one month after news of DMX’s death broke, new music was already on the way. “As fans around the world continue to celebrate the life of hip-hop icon DMX,” a press release from Def Jam in May 2021 noted, “his career-long producer and friend Swizz Beatz announces [the] legendary rapper’s posthumous studio album of all new original material, EXODUS.”

However, many consumers have become savvy enough to recognize these efforts as acts of capitalism — attempts to gain revenue on the backs of fallen legends or rising stars that weren’t able to fully see their limelight. “Record companies are vultures,” one user tweeted in response to the EXODUS announcement. “Let the man rest. Unless he expressly wanted this music out soon while he was here, you only see death as dollar signs,” another wrote.

The #DMX legacy continues with the #EXODUSALBUM. Celebrate the life of a legend and tap in now:https://t.co/7WjArkvysk pic.twitter.com/bgtFCaXR0M

The debate around posthumous releases may be about as old as the concept itself, which dates back to at least the 19th century, when composer Frédéric Chopin reportedly had a deathbed wish “that all his unpublished manuscripts be destroyed.” Sound familiar?

Nevertheless, Chopin’s musical executor chose 23 unpublished piano pieces and grouped them into opuses 66-73, which were then published in 1855. (Billboard didn’t start publishing its album chart until 1945, so we can only speculate as to the numbers that Chopin’s posthumous releases might have pulled off.)

The procedure has continued well into our current moment, of course. But as recently as a few decades ago, fans were more willing to open their hearts along with their wallets. The posthumous album, at that time, was still something special — momentous, even — especially within hip-hop.

There are examples, certainly, of when it works. Notorious B.I.G had a short career, yet is still considered among the hip-hop GOATs — in large part for what he delivered when alive, but more so for his 1997 magnum opus Life After Death, released 16 days after he was shot and killed.

The album and its title are especially eerie, but the tracks serve as an autobiographical work that could not have been completed without Biggie’s touch. Diddy or any of his affiliates likely could have told his story well by putting together his unreleased cuts, but it would have never been the same as receiving them directly from the source. As a result, complaints about the 25-track Life After Death, which clocks in at just over two hours, were (and remain) few and far between.

The same cannot be said for 1999’s Born Again or 2005’s Duets: The Final Chapter. Similar to Life, both latter releases were long, but critics could tell they were thrown together as opposed to neatly arranged. Method Man, in particular, felt Duets had “n****s on that album that B.I.G. would have never rocked with, for real.”

Tragedy (and label revenue opportunity) unfolded once again when the 20-year-old Bashar Jackson was killed in February 2020, just 12 days after releasing his second mixtape as Pop Smoke, Meet the Woo 2. The Brooklyn drill leader took the game by storm with his summer smash “Welcome to the Party,” the audacious follow-up “Dior,” and an appearance on the JACKBOYS track “GATTI” alongside Travis Scott.

The good news — or so it seemed upon the announcement — was that his mentor 50 Cent and label executive Steven Victor sought to see his vision through. Pop’s first posthumous release, Shoot for the Stars, Aim for the Moon, was released in July of that same year.

The excitement turned to head-scratching upon the LP’s release, with fans suggesting it felt hurried, unfinished — that it presented as a compilation of major artists featuring Pop, instead of the opposite. Adding insult to injury was the controversy surrounding the Virgil Abloh-designed cover art, and the leaked, since-removed Pusha T verse on “Paranoia” that caused a stir between the G.O.O.D Music President and Young Thug, who was also featured on the track alongside Gunna.

It was hard for some to celebrate Pop Smoke when the moment felt much more about everything else. However, for Victor and Republic Records, any critiques likely paled in comparison to the project’s commercial success. 50 Cent, though forgoing any monetary gain from the album, told Billboard, “As soon as I know that the record positioned itself for No. 1, I feel like I did enough.” SFTS, ATFM had one of 2020’s highest debuts. With 251,000 units moved in its first week, it entered atop the Billboard 200.

Whether it was a genuine appreciation of the music or response to the late MC’s charismatic nature, radio DJs and playlist makers found plenty of material on Pop Smoke’s posthumous release that clearly still resonate today. Everything went well for Republic, who released a deluxe version soon after. The update involved more of Pop’s Brooklyn Drill comrades than heard on the initial offering.

Then there are the surviving family members, and their range of input and involvement, to consider. Gustav Åhr, who recorded as Lil Peep, died from an accidental fentanyl overdose in 2017. The music that followed was soured by the fact his mother, Liza Womack, was initially excluded from the album-making process. “A twenty-one-year-old boy doesn’t have a will,” she told The New Yorker, “So I didn’t have any legal right over anything.” She went on to bring a lawsuit against Peep’s label and management, First Access Entertainment, citing their culpability in his death. First Access denied any responsibility in the matter and continued on with their business, rolling out a video with Marshmello, and a Ty Dolla $ign remix of the previously-unreleased Peep track “When I Lie.”

Another instance of a posthumous collaboration gone wrong occurred when the late XXXTentacion was added to “Falling Down,” a track Peep had written with his friend ILoveMakonnen. Just four days after XXXTentacion’s passing, Womack learned Columbia sought to compile a posthumous collaboration between the polarizing rapper and her son, but she recalled Peep denouncing any ties to the “Look at Me” artist and fought it.

The XXXTentacion version of “Falling Down” was released anyway, and Peep’s posthumous album Come Over When You’re Sober Pt. 2 was finished and released in 2018. From then on, Womack vowed to be more heavily involved.

Presumably, Womack had had conversations with Lil Peep that did not translate when it came to his label’s actions after his death. She felt she knew what songs sounded finished, as opposed to the label deeming them demos that needed features. She essentially A&R’d 2019’s EVERYBODY’S EVERYTHING, and Columbia executive Ron Perry seemingly wanted to make things work for the both of them by suggesting the album accompany a documentary about his life.

Fans received both projects cautiously, and many were aware that the label still got what they want; it was simply packaged in a different way. It’s befuddling to consider the aspects of this mess that likely would not have occurred if he were still alive.

The unfortunate reality is that fans will always prefer the music’s originator be around to deliver it. The difference between an original album from the source and one released by an affiliate is a lot like the distinction between eating food in a restaurant versus ordering that same meal through a third-party delivery service: Some ingredients are bound to be lost in translation.

There are instances where the middleman gets it right. Mac Miller’s Circles, DMX’s EXODUS, and MF DOOM’s Super What? were carefully handled by creatives who worked closely with the artists while they were alive, and aside from the instant commercial success, they were hearty offerings that stayed true to each artist’s nature.

Jon Brion assisted in the making of Mac’s Grammy-nominated 2018 record Swimming, and along the way, he and the rapper conceived Circles. He was equipped to execute what the Point Breeze, Pittsburgh musician would have wanted, because he actually spent time with him in the studio and received his family’s blessing. The album debuted at No. 3 on the Billboard 200 with 164,000 equivalent album units earned.

The same goes for EXODUS, which was finalized by legendary producer and longtime DMX collaborator Swizz Beatz. The two began working on EXODUS back in 2020, after Dark Man X’s heart-warming Verzuz battle against Snoop Dogg. Despite the aforementioned backlash surrounding the initial announcement, Swizz’s understanding of where the Mt. Vernon lyricist was mentally at the time, on top of their decades of teaming together, ensured his legacy and product were well-received by the fans who had been hoping for something special.

Finally, MF DOOM and Czarface completed Super What? in April 2020, but delayed putting it out due to the COVID-19 pandemic. Sadly, Daniel Dumile would not be around to see how it affected his fans, as his wife announced on New Year’s Eve that he had passed on October 31st, 2020.

The underground king’s loss shook up all of hip-hop, but fortunately he had trusted associates in Esoteric, 7L, and Inspectah Deck, who brought Super What? to completion. 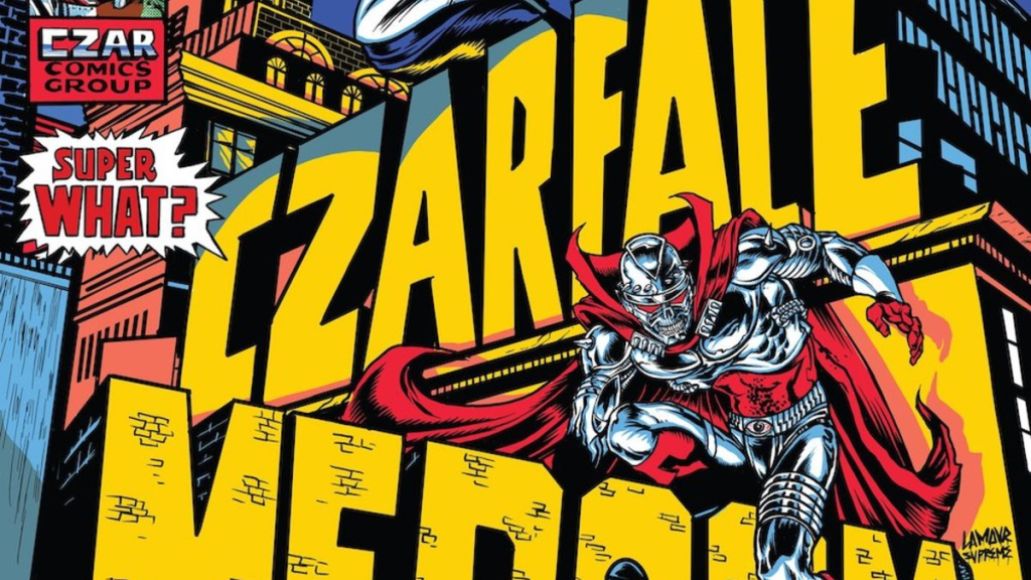 While these endeavors went over well, one can’t help shake the creeping feeling that posthumous albums are more often than not unethical and poorly done. Labels may think they are providing closure, but more obviously, they are exposing their greedy and exploitative natures.

If they care so much about providing an artist’s sound to the world after they go, why not provide resources to aid in mental health or addiction while they are here? Do they really care about the artists, or is more about what the artists can do for them?