The Pitch: Do you already think Boba Fett is cool? Your answer to that question is 1000% going to drive your interest in the second Star Wars series (of many) to finally debut on Disney+. Featuring Temuera Morrison in the role he was set up to play by the prequels, The Book of Boba Fett is a love letter to an action figure, with occasional glimpses at a deeper significance lurking in the shadows.

Do you not already think Boba Fett is cool? Well, that’s a concept which creator Jon Favreau and pilot director Robert Rodriguez clearly find to be inconceivable. If you don’t even know who Boba Fett is, and/or feel disinclined to learn more — well, sorry, this show has no patience for your kind. This is a true super-fan effort designed to reveal just how much of the core fanbase is still excited by this sort of granular deep dive. And the target audience, at least, should be happy.

A Question We Never Needed Answered: Mustering the same level of production values established with The Mandalorian, The Book of Boba Fett begins where, for decades, we’d assumed the legacy of Boba Fett would end: inside the Sarlacc pit on Tatooine where the bounty hunter had fallen to his presumed death.

How did he survive? That’s the very first thing covered in the series premiere, which splits its time between flashbacks to what happened after Fett’s descent into the pit, as well as the events following Mandalorian Season 2, in which Boba, alongside his loyal lieutenant Fennec Shand (Ming-Na Wen), make the decision to fill in the power vacuum left behind by the death of Jabba the Hutt in Star Wars: Episode VI — Return of the Jedi. 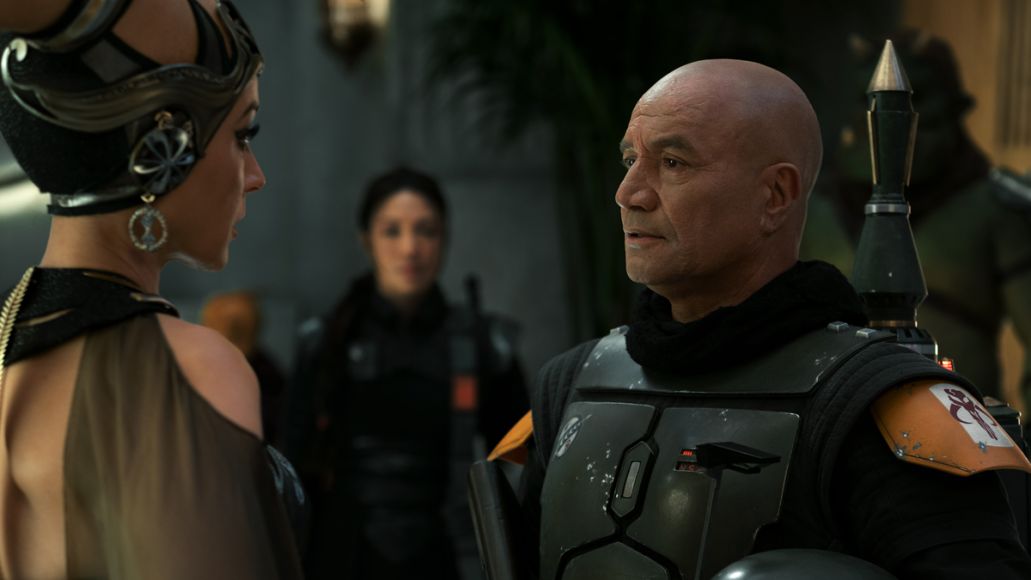 Are Those the Chanel Boots? Like the great rom-com heroines before him, to take on this new adventure Boba gets himself a bit of a glow-up (nothing like a crisp new outfit and some time in a healing tube to help you look your best). But while new clothes might have helped Julia Roberts navigate high society, the challenges of becoming the new HBIC of Tatooine are a bit more challenging, as Boba finds that most of those making a living in the underworld of Mos Espa aren’t necessarily thrilled to have a new alleged heavy-hitter come rolling into town, claiming to be in charge.

Boba’s strategy is a unique one, when it comes to being a crime boss: “I intend to rule with respect,” is his comparatively warm and fuzzy approach to becoming the new Jabba the Hutt in town. It’s the humanizing element necessary to get newcomers invested in this character as a protagonist, and also sets up an immediate (and intriguing) conflict: Can a fundamentally corrupt and brutal system be reformed into something that operates with some basic level of decency?

That glimmer of potential is there, though it’s sandwiched in between multiple monster fights (oh, do the Disney+ Star Wars shows love a good gross monster fight), other melees, and the many many flashbacks. Of all the kinds of shows that Book of Boba Fett might choose to emulate, something like The Sopranos is actually a great model. But whether it can even hope to approach that level of complexity and nuance is very hard to say, after this first episode, given all the other elements that are packed in.

In The Book of Boba Fett, the Bounty Hunter's Not a Regular Crime Lord, He's a Cool Crime Lord: Review