The Pitch: At the end of Season 3, things were changing for the inexplicably-karate-obsessed denizens of Encino, California. Sensei John Kreese (Martin Kove) is now fully in command of Cobra Kai, with Johnny Lawrence’s (William Zabka) troubled son Robby (Taylor Buchanan) now his trusted sempai; the school’s firmly back on its ‘strike hard, strike fast, no mercy’ kick, especially in a softened Lawrence’s absence.

But as a new year (and a new karate tournament) dawns, Lawrence has one way of getting Kreese out of town for good: if either he or his former-rival-turned-reluctant-ally Daniel LaRusso (Ralph Macchio) can get their dojos to win the All-Valley, Kreese is gone forever.

It’s a tall order, considering that a) Johnny and Daniel-san’s decades-long rivalry still simmers below the surface of their brittle alliance, and b) Kreese has called upon an old friend for help: former Cobra Kai sponsor and Karate Kid Part III villain Terry Silver (Thomas Ian Griffith, pushing 60 and still rocking that ponytail), who’s got the money and the lack of scruples to take them over the top. It’s the biggest competition yet for our washed-up underdogs, and who knows what fences it’ll mend, or rifts it’ll open, between their impressionable young students?

The Same Old Kicks: Much like its scrappy protagonists, Cobra Kai feels like the underdog battling its way to a hard-fought victory. Starting as a little-seen series for the abortive streaming service YouTube Red, Josh Heald, Jon Hurwitz, and Hayden Schlossberg’s Karate Kid sequel show suddenly found itself a Netflix darling when its first two seasons were ported over to the populist streaming service; a third original season for Netflix cemented its status as the Little Show That Could.

It was a sneakily genius premise, one primed to indulge in and deconstruct our current wave of ’80s nostalgia with one well-placed punch: Follow one of the quintessential ’80s movie bullies, Zabka’s Lawrence, into midlife to see how the events of those movies affected him. As its scope expanded, so has its cast of characters: Danny LaRusso was quickly elevated to co-lead in Season 2, their mutual dislike fueling much of the series’ momentum, while showing us how toxic nostalgia itself can become.

But in Season 3, Cobra Kai began to stray from its deconstructionist mission, slowly but surely succumbing to the kind of unironic ’80s nostalgia that it was actively fighting. Season 4, for all its high-kicking charm, is no different, right down to digging through the dramatis personae of the later Karate Kid sequels for more inspiration. The results are pleasingly comfortable and slyly funny as always, but the premise itself, like its protagonists, is starting to show its age. 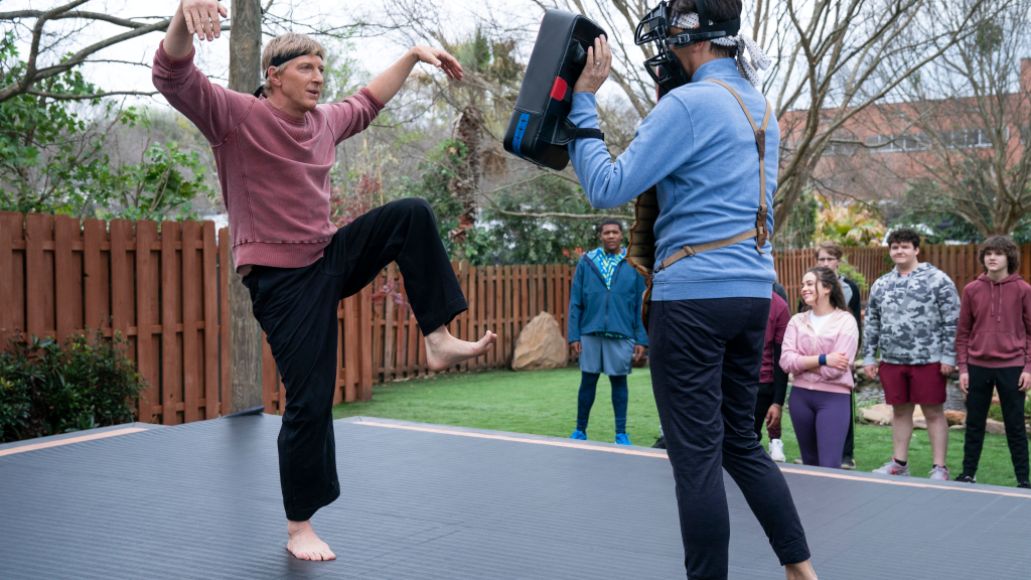 The first half of the season sets up some intriguing shakeups to the formula: Johnny and Daniel, now having fused their two schools (Eagle Fang and Miyagi-Do, respectively), spend the first few episodes of the season trying to learn how to combine the former’s aggression with the flow-like-water defensiveness of the latter. Zabka and Macchio have long had fun, gritted-teeth chemistry throughout the series, and forcing them to work together just gives them even more opportunity to build off that potential energy.

It’s these moments that really start to unpack the reasons why they’ve been so mad at each other all these years, and the brief moments when they start to lower their barriers and see eye to eye are fantastic. A shame, then, that the second half of the season engineers a return to the old Johnny vs. Danny dynamic, which admittedly makes sense for their oil-and-water personalities but makes for disappointingly familiar television.

Cobra Kids: The same could be said for the younger characters, who’ve always been Cobra Kai‘s major weakness. To their credit, most of the young actors are giving it their all, especially with the aggressively choreographed karate sequences; the two-part finale at the All-Valley (restructured with some fun new angles) contains some truly impressive work. However, apart from some minor shakeups, all of the kids are still coasting off storylines and tensions that have existed since the beginning of the series.

Miguel (Xolo Maridueña) still bristles against Johnny getting closer to his mother, and starts to feel like second fiddle to the newer students, while Hawk (Jacob Bertrand) struggles to redeem himself after leaving Cobra Kai. Similarly, Peyton List’s troubled Tory gets blissfully more to do this season, trying to unpack the circumstances that turned her into a bully in a way not unlike the Johnny Lawrence of Season 1. Her rivalry with Sam (Mary Mouser) remains one of the more sneakily entrancing subplots in the show.

But now, the show has been around long enough for the students to become the masters, which means introducing some fresh blood to see whether the sins of their senseis have been passed down to them. For Robby, now fully immersed in Cobra Kai, that means taking a vulnerable new student named Kenny (Dallas Dupree Young) under his wing.

Kenny is bullied every day by a group of kids that includes Danny LaRusso’s younger son Anthony (Griffin Santopietro), and Cobra Kai represents both a chance to fight back and to become the very bully he wants to defend himself against. It’s an intriguing addition to the plot, but feels vestigial considering we’ve got so many other kids to keep track of. 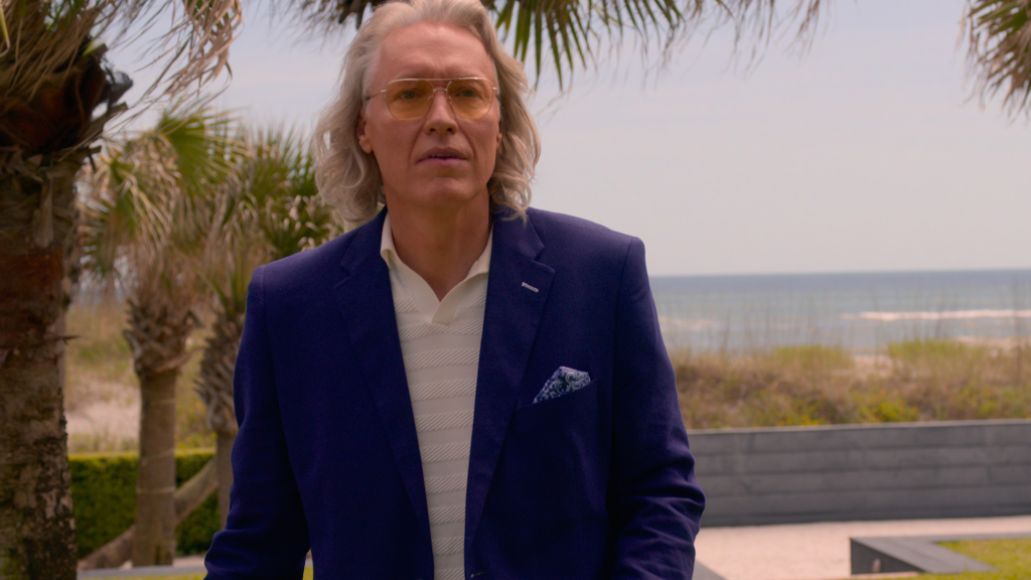 Silver Bullet: For as much as Cobra Kai started out as a show about leaving the toxicity of ’80s machismo behind, the Netflix-headed seasons indulge in that same machismo a little too unironically at times. That extends to series baddie Kreese, whom we learned a lot more about in Vietnam flashbacks last season but who mostly functions here as the comparatively-sane alternative to rich, wild-eyed Terry Silver. Griffith is certainly having a blast, playing an older Silver with suitably reptilian zen; he turned away from his life of OTT ’80s villainy long ago, only to be drawn back into its delicious heat by Kreese’s entreaties.

It’s an interesting way to rehabilitate and reconfigure such a creaky ’80s archetype. But like most of the problems this season, that growth taps out around halfway through the season in favor of crystallizing him back into ponytail-twirling bad guy mode. What’s more, his inclusion makes the show double down on a more black-and-white morality than the grey-area complications of earlier seasons. If Cobra Kai Seasons 1 and 2 taught us to see both sides of every story, Seasons 3 and now 4 explore the idea that there are truly irredeemable bad guys who must be stopped with the power of kicks and punches.

The Verdict: Don’t get me wrong, Cobra Kai is still a good deal of fun, especially when it indulges in Johnny’s stuck-in-the-past ’80s bravado. (Late in the season, he takes a shine to a booksmart young woman who joins Eagle Fang with encyclopedic knowledge of ’80s action movies.) Contrast it with Danny’s constipated, almost crippling worship of the late Mr. Miyagi, and the arched eyebrow with which most everyone else in the Valley treats this rivalry, and you’ve still got an innately watchable show.

The fear is that the show’s starting to lose sight of its central lesson: Perhaps it’s best not to obsess over the past, as it can lead you to neglect the present. Right now, the show exists in a liminal state between depiction and endorsement, and if it’s not careful, it can slip off the tightrope far too easily.

Cobra Kai Is Still Nostalgic Fun, But Starts to Pull Its Punches in Season 4: Review