Korn have announced a 2022 US tour with support from Chevelle and Code Orange.

The stacked tour package kicks off on March 4th in Springfield, Missouri, and runs through the end of the month, wrapping up on April 1st in Wichita, Kansas. The trek will hit many Midwestern cities along the way, as well as a few dates in the Northeast.

In addition to the headlining run, two shows (Phoenix and San Diego) have been added to Korn’s mini-run with System of a Down, Helmet, and Russian Circles. Those dates will precede the previously announced two-night stand in Los Angeles, which was most recently postponed from October due to SOAD singer Serj Tankian’s bout with COVID.

Speaking of COVID, Korn had a rough go of it on their 2021 tour with Staind. Singer Jonathan Davis, guitarist James “Munky” Shaffer and drummer Ray Luzier all contracted the virus at different points on the tour. The band has also been touring without bassist Fieldy, who took a leave of absence from the group after falling back on “bad habits.”

Korn will be out in support of their upcoming album, Requiem, due out February 4th. The band recently released the LP’s lead single, “Start the Healing.”

Chevelle released the album NIRATIAS earlier this year, while Code Orange recently unveiled a decadent music video for the one-off single “Out for Blood.” Following the spring support slot for Korn, Code Orange will then head on a headlining North American tour of their own.

See Korn’s full list of 2022 tour dates and the official tour poster below. You can get tickets here.

^ = w/ System of a Down, Helmet, Russian Circles
* = w/ Chevelle and Code Orange 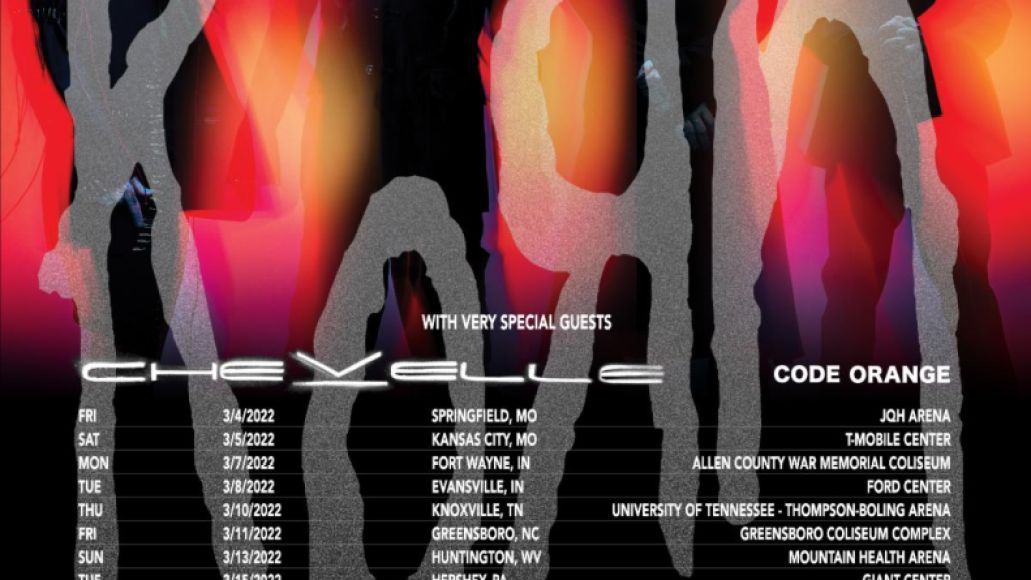 Korn Announce 2022 US Tour with Chevelle and Code Orange