Setting the Stage: It’s hard to believe, but it has been 40 years since thrash legends Metallica first formed. And to celebrate this impressive career accomplishment, the band — frontman James Hetfield, guitarist Kirk Hammett, bassist Robert Trujillo, and drummer Lars Ulrich — booked two arena shows (December 17th and 19th) at San Francisco’s Chase Center. When those concerts quickly sold out, the metal titans announced they were making the shows available to stream for free via Prime Video and Amazon Music.

Unlike their livestreams from last year, including the charity show Helping Hands Concert & Auction, Live & Acoustic from HQ, each night of the “40th Anniversary Live” performances is taking place in front of a sold-out arena, with tickets initially being made available exclusively to members of the group’s Fifth Member fan club. And similar to the group’s 30th anniversary concerts, the first night saw the group touch upon all eras, setlist-wise. In fact, they made sure to play at least one song from every one of their 10 studio albums, plus numbers from S&M and Garage Inc.

Taking the Stage: Before all the headbanging fun began, the arena-sized crowd (and those sitting at home watching) were treated to a mini “Metallica story” narrated by actor and super-fan Jason Momoa. The video featured vintage clips of the band members, before images of the first-ever Metallica logo appeared on a screen above the stage, as the band launched into an appropriate opening number: “Hit the Lights,” the first track on the band’s first album, 1983’s Kill ‘Em All.

All four band members were dressed in black, with Hetfield sporting a similar guitar to the one he played back in the early Metallica days — a white Gibson Flying V. Stage-wise, the band was surrounded by fans in a 360-degree setup.

At the end of the opening number, a neat effect took place – the audience was given bracelets that flashed akin to a mini-strobe light. And with all of the crowd raising their hands in unison, thousands of mini-flickering lights surrounded the stage.

“Creeping Death” was up next (a tune you can usually count on being played early in Metallica’s sets). Images of fast approaching red clouds being shown on the screen, which caused everything and everyone in the arena to be illuminated in the color.

Metallica like to mix things up for their fans with these special shows, and this first night of their 40th Anniversary celebration was no different — deep cuts (“Trapped Under Ice,” “Breadfan,” “No Leaf Clover”) were mixed in with the expected concert standards (“One,” “Sad But True,” “Nothing Else Matters”).

And the above-stage screen was utilized in other ways besides merely offering mood-stirring images and/or colors – such as another mini-doc that included clips focusing on the two bassists that preceded Trujillo in the band, Jason Newsted and the late, great Cliff Burton, which then led into a great rendition of the Master of Puppets instrumental “Orion” (with Trujillo doing a fine job of replicating Burton’s fuzz/wah-drenched bass lines). And guitar geeks will have noticed that Hammett was playing his prized “Greeny” 1959 Les Paul for the song.

Other notable songs included the …And Justice for All tune that has been resuscitated on-stage in recent years (“The Shortest Straw”) and the lead-off tune from the oft-criticized St. Anger (“Frantic”). But probably the evening’s biggest surprise was the first-ever live performance of “Fixxxer” – the closing tune from Reload.

Unlike their 30th anniversary shows 10 years ago at the FIllmore, no special guests joined Metallica onstage for this first-night performance. And instead of ending the show in an expected manner (i.e., “Master of Puppets,” “Enter Sandman,” “Battery,” etc.), two seemingly unexpected tunes closed the evening — the mid-paced “The Day That Never Comes” and the turbo-charged “Spit Out the Bone.”

That said, fans scoring at home and in the arena would have noticed by then that Metallica played every song in the set chronologically, so it made sense that they closed out with tunes from 2008’s Death Magnetic and 2016’s Hardwired… To Self-Destruct. Although purists may point out that the band’s cover of Budgie’s “Breadfan” was originally released in 1988 as a B-side and could have been placed earlier.

After the final note rang out from the amps, viewers witnessed perhaps one of the longest “thank yous” in concert history – nearly ten minutes of the band sauntering around the stage, acknowledging fans, and all four members saying a few things into Hetfield’s “Elvis mic,” before taking a bow and departing.

Fans hoping for a similar show to the 30th anniversary gigs, where the band was joined onstage by various metal luminaries as well as all of their surviving former members (including Dave Mustaine and Jason Newsted), may have left a bit disappointed. But they were treated to a nearly two-hour career-spanning set.

Let’s see what the metal titans have up their sleeves on Sunday for second of their two 40th anniversary shows.

See our photos of Friday night’s show below, as well as the setlist and select fan-filmed clips of the concert. Tune in Sunday (December 19th) on Prime Video and Amazon Music to catch night two of Metallica’s 40th anniversary shows. 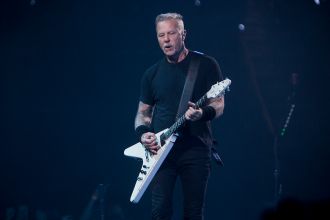 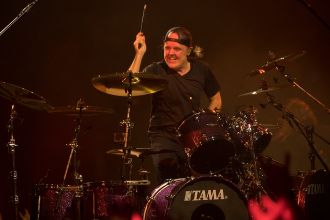 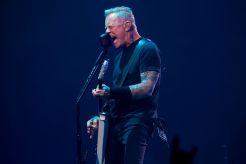 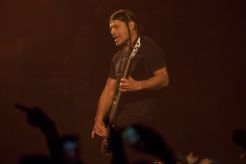 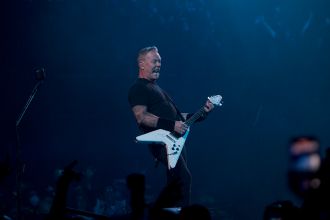 All photos by Raymond Ahner (@raymond_ahner)

Setlist (Night 1):
Hit the Lights
Creeping Death
Trapped Under Ice
Welcome Home (Sanitarium)
Orion
The Shortest Straw
One
Sad But True
Nothing Else Matters
King Nothing
Fixxxer
Breadfan
No Leaf Clover
Frantic
The Day That Never Comes
Spit Out the Bone