Baroness have rescheduled their intimate 2022 North American tour dates, citing the rise of the Omicron variant of COVID-19.

The second leg of the intimate “Your Baroness” tour — featuring fan-voted setlists for each concert — was initially set to launch tomorrow (January 14th). At the last minute, the band has decided to push those dates back by roughly two months.

The updated itinerary now kicks off on March 11th in Harrisonburg, Virginia, and runs through April 16th in Boston (shows in Nashville and Tucson have been dropped due to venue unavailability). Tickets to the original dates will be honored, and you can also buy tickets via Ticketmaster.

Baroness issued a statement on the postponement via a press release:

“With the current surge in Omicron cases, we will be postponing Leg 2 of the ‘Your Baroness Tour ‘until March and April. With the intimate, ‘in your face’ nature of these shows we want to make sure that we’re doing everything we can to ensure a safe, healthy night for everyone in the room. We don’t want anyone coming to see us to feel like they are at risk, and we also don’t want to get back out there and end up having to cancel (more) shows because someone in the touring party is ill.

These shows have been some of the most thrilling and rewarding we’ve ever done, and we absolutely cannot wait to get back to it. Luckily, we’ll only have to (impatiently) wait a few extra weeks to do it!”

The tour is unique in that Baroness are letting fans decide the setlist for each show. Any and all material from the band’s catalog is on the table, making the outing particularly enticing for the hardcore Baroness fan.

See the rescheduled dates for Baroness’ North American tour below and get tickets here. 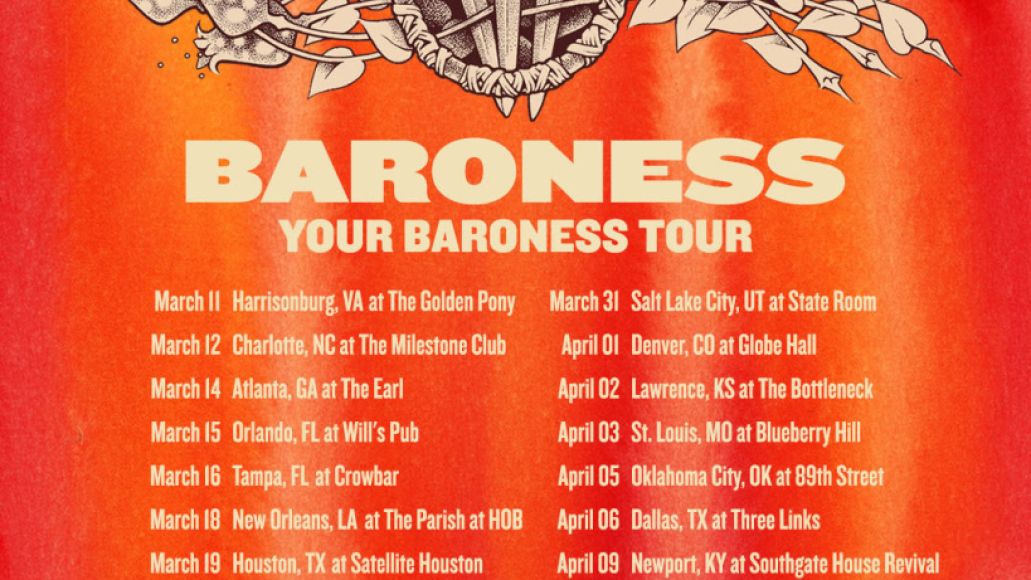