Once you know the premise, you realize there’s no other possible title for Somebody Somewhere. The new HBO comedy, executive produced by the Duplass brothers and directed in part by Jay Duplass, stars Bridget Everett as Sam, a 40-something resident of small-town Kansas who’s mourning her deceased. sister, working a dull job, and in general feeling a bit lost in life — until, that is, she becomes closer to Joel (Jeff Hiller), an old high school classmate who helps reawaken in her a passion for music.

The show is a sometimes sweet, sometimes sad, and more often than not very funny look at what it means to try to reawaken after years of sleepwalking through life, anchored by the deep and complex friendship between its central characters.

During a recent press day, Consequence was lucky enough to speak with Everett and Hiller about making the show and how it connects with their own lives — given that both of them know an awful lot about the struggle of being an artist of any kind. While both actors have been working on screen for years both on the New York stage as well as in featured roles across projects including Inside Amy Schumer, Lady Dynamite, 30 Rock, Unbreakable Kimmy Schmidt, and more, they also were careful to hold onto their survival jobs for as long as necessary.

In the interview below, transcribed and edited for clarity, Everett and Hiller take us through the show’s personal significance to their own lives, including its central message: “Just because you’re in your 40s doesn’t mean hope is dead.” An inspiring thought, no matter what your age might be.

To start off — for both of you, how did this show come together for you?

Bridget Everett: I got a deal with HBO to make a show, so that started it. I got together with Carolyn Strauss, who is an incredible TV legend, and then we met with Paul and Hannah, our showrunners, and they pitched this idea for a show and it really just hit me in the gut — like it was really cool and it wasn’t something I would think of, to do an origin story in a way. We all worked in the writer’s room and we all worked it out trying to make it as Kansas-y and as Sam-y as we could.

Jeff Hiller: And for me, I auditioned.

Hiller: And I was like, “Oh, I definitely didn’t get this, they didn’t even turn on the camera!”

Everett: You learn your lessons along the way and do the best you can.

Totally. Going back to that pitch with the showrunners, what were the core ingredients at that point? What were their touchstones?

Everett: Well, there was the dead sister which I can relate to, it’s a big part of my life, and then Sam drifting through life, I could relate to. It’s hard to remember specifically because there’s so much that’s come since but they really just hit a lot of emotional cornerstones of things that have shaped me somehow. So maybe that’s working dirty, but it worked on me.

Bridget, when you were looking for your Joel, what were the qualities there?

Everett: It’s hard to describe because it’s something that’s intangible. I like people that are inherently funny but you can feel their underbelly pulsing through them, and I feel like Jeff is one of those people. And Jeff brought it to Joel — you don’t want to feel sorry for Joel, and Jeff did such a masterful job of making Joel so funny and sensitive and heartwarming and funny but not tragic. You feel for Joel without feeling sorry for Joel.

In terms of the basic construction of the season, what I find so interesting is that if you break it down to some degree, it feels like a show-biz story, but it doesn’t take place in LA or NY. What was important about having that thread throughout?

Everett: Well I think that music is Sam’s heart, and she’s missing it. It’s not small town girl goes to the big town, it’s like if she stayed there, what would that be like? Finding a way in life so that when she sings, the song appeals to her. I think that might be a challenge to figure out how to incorporate that into her life moving forward. It was mostly about making the music a part of her story and not the story itself, if that makes sense.

Jeff, what was it like playing a character who has musical talent but isn’t trying to actively pursue it as a career?

Hiller: It definitely was interesting and it was one of the things that hooked me to Joel. I like music but my career is not about being musical, so it’s like a joy thing for me. It’s less about pop songs and more about downtime and whatever, I’m living my stereotype. So I really completely relate and understand that this person wants to let their metaphorical hair down and just belt out their favorite tune with the goddess they’re obsessed with who they finally get to be friends with and it was like yes, this is fantasy fulfillment for me.

Everett: And what’s so cool about it too is that Joel is giving Sam that gift because he’s bringing her back to singing, which is her language, her connectivity to people. He’s giving her that.

Hiller: And she’s giving him this validation and this friendship, I think.

Everett: He’s ushering her back to life, good, bad, and ugly, which is a really cool thing.

There’s also something really cool about getting to watch characters just living their life.

Everett: Exactly, and it’s really parallel to my life, waking up in my 40s and being like uh-oh, what happened to those last couple of decades? You need somebody to take you by the hand and pull you out of it and make you take a chance on yourself again. That’s also a part of it — it’s never too late to be the thing you wanted to be.

Hiller: And that passion that you haven’t given into, it’s so important to do. So many of us suppress the things that we are most passionate about, and it’s just sad. 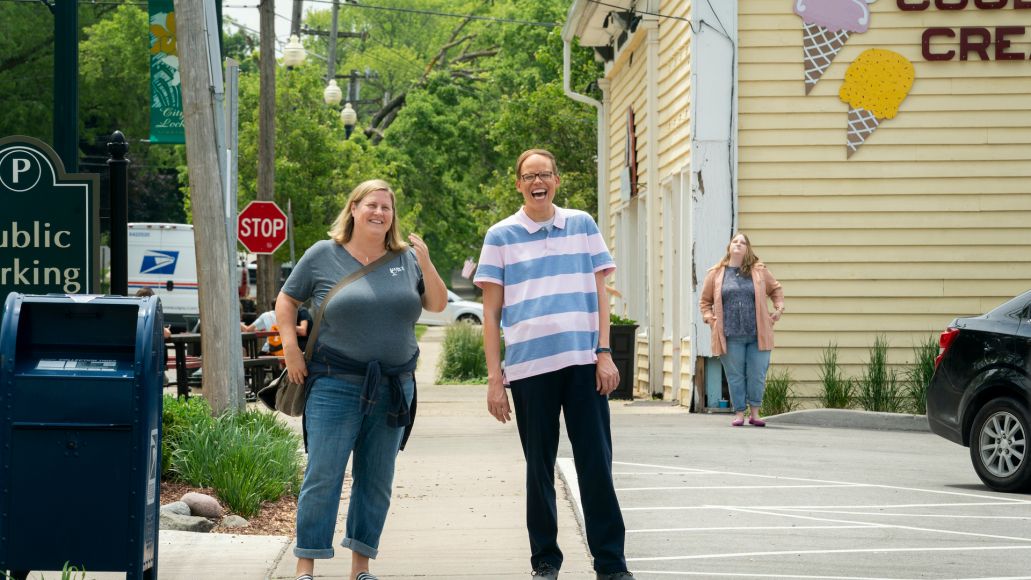 What were you doing within the restaurant industry?

Everett: I waited tables. I started off as a dishwasher when I was 14 and I worked my way up to waitress and I stayed that position in various establishments until 2015.

The last couple of years it was less and less, because I was getting more jobs, but I remember I worked at this place called Ruby Foo’s on the Upper West Side and I had a tiny part in the Sex and the City movie, and this was the type of restaurant where it was good for large parties.

So, down the street Sex and the City was playing, and there would be these groups of women who would come from the movie, like 12 woman all dolled up like Carrie, and they come and be like “oh my god, were you in the Sex in the City movie? Now bring us drinks.” Just the highs and the lows of show-biz right there, ladies and gents.