After a two-year absence, Coachella will make its long-anticipated return over two consecutive weekends — April 15th-17th and 22nd-24th — at the Empire Polo Club in Indio, California. Kanye West (aka Ye), Billie Eilish, and Harry Styles will each close out a night of the festival, topping a 2022 lineup that also includes Phoebe Bridgers, Megan Thee Stallion, Flume, Danny Elfman, Doja Cat, Jamie xx, and Run the Jewels.

As previously reported, Coachella was left scrambling for a new set of headliners after Travis Scott and Rage Against the Machine were both dropped from the bill. (Scott was removed following the tragic events at Astroworld, while RATM apparently pulled themselves out of the festival.)

Tickets to weekend one of Coachella are sold out. Tickets for weekend two go on sale January 14th at 10:00 a.m. PT. A pre-ticket registration is now ongoing.

In terms of COVID-19 health and safety requirements, attendees must show full proof of vaccination or a negative test taken within 72 hours of the event. More information can be found here.

The two previous editions of Coachella were postponed due to the pandemic. In an interview with the Los Angeles Times last fall, co-founder Paul Tollett explained why he did not follow the lead of other major US festivals and hold an event in late 2021. “I told AEG, ‘We’re going to wait on Coachella.’ It wasn’t a fight at all,” Tollett said. “I don’t want to force it too soon. I’d rather wait,” he added. “You’ll never remember that you had to wait, but you’ll remember if you went to a really bad event.” 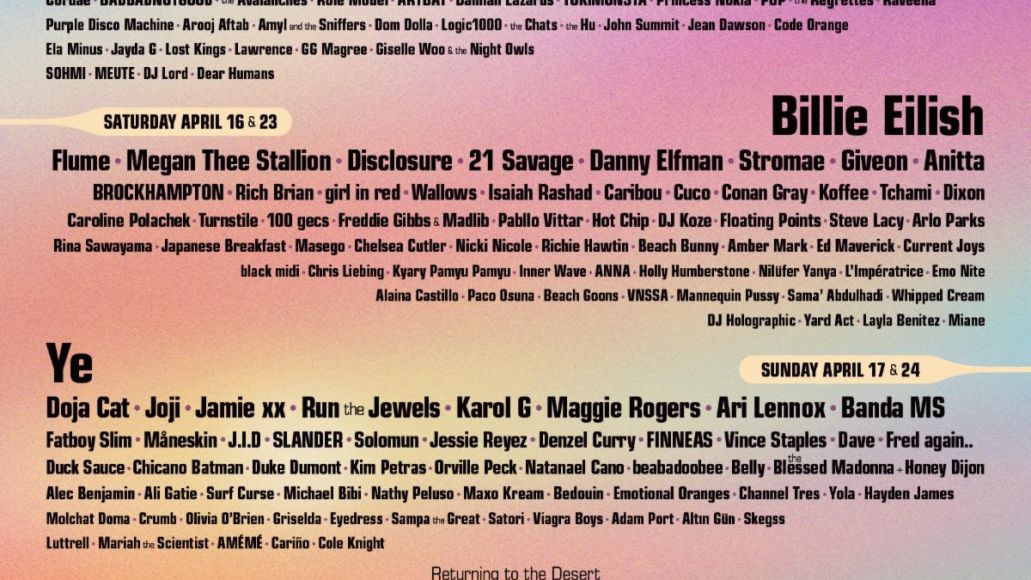